The Streak: Winning the match, losing the war

Where: The Georgia Dome, Atlanta 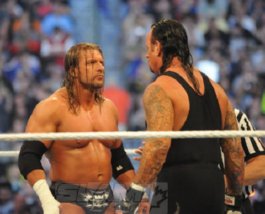 Triple H and The Undertaker face off at WrestleMania 27 in Atlanta. Photo by Mike Mastrandrea

Some men may never rest in peace. Triple H has made it quite clear in the last 12 months that he won’t rest until The Undertaker’s WrestleMania streak is broken. The Game had his opportunity last year, but came up a little short.

Triple H and The Undertaker may not agree on a lot of things. But prior to that match, they were in full agreement that they were the last of a dying breed and both of them needed to know who the better man was.

“It’s all about passion, and these two have plenty of it,” said WWE Hall of Famer Jim Ross.

This was actually a special occasion for Ross, who hadn’t called a pay per view in over a year. He was especially thrilled that he was chosen to call this match, as he had seen both men’s careers progress before his very eyes.

“It wouldn’t have mattered if I had been sitting at ringside when the nod came. I would have been ready to go to work, especially at WrestleMania and in particular for this match,” Ross said. “I emotionally invested in these two men long ago and consider being able to broadcast this bout one of my career highlights. Plus I follow WWE TV efforts on a weekly basis. I’m a fan. I will always be a fan.”

WrestleMania 27 was not the first time that Triple H attempted to break The Undertaker’s streak. As a matter of fact, he tried exactly 10 years earlier. And The Game had grown a lot since then.

Triple H’s loss at WrestleMania 17 knocked him down a peg or two at first. He would bounce back though, winning the Intercontinental Championship, and then capturing the Tag Team Championships with “Stone Cold” Steve Austin.

It was obvious at that point, that the WWE had big plans for The Game in 2001. Unfortunately, those plans were changed due a serious quad injury, leaving Triple H on the shelf for almost a year. He ended up dropping both titles in back-to-back nights as a result.

Triple H returned triumphantly in early 2002; only this time, he was a babyface. It was a new role for Triple H, but it was one that fans just weren’t buying in to. Regardless, he ended up winning the 2002 Royal Rumble match and then went on to main event that year’s WrestleMania and win the Undisputed (WWE and WCW) Championship.

In the summer of 2002, Triple H reverted back to his evil ways and turned on his long-time friend Shawn Michaels. During this period, The Game was basically handed the World Heavyweight Championship (former WCW Title) on a silver platter by Raw General Manager Eric Bischoff. Needless to say, this was not appreciated by the rest of the locker room.

Triple H briefly lost the title to Shawn Michaels, only to win it back a month later. He would then hold it for the next nine months, successfully defending against all challengers, thanks in part to his new manager Ric Flair.

After months of being Raw’s top guy, Triple H was finally knocked off his pedestal by the man who took his title, Bill Goldberg.

Goldberg was certainly a force to be reckoned with, but even he was no match for Triple H’s new group, Evolution, who assisted The Game in recapturing the World Heavyweight Championship in December 2003.

Triple H would hold the title until the following year’s WrestleMania, where he would drop it to Chris Benoit.

As dominant as Evolution was, the group started imploding from within, once Randy Orton won the World Heavyweight Title, and Triple H was overcome with feelings of jealousy. Orton was immediately kicked out of the group and he was defeated by Triple H, who won his ninth heavyweight championship one month later.

Orton’s success caused a light bulb to go on over the head of Batista as well, who figured out that he never really needed the group either, and Batista ended up beating Triple H for the World Heavyweight Title at WrestleMania 21.

Following a series of losses to Batista that year, Triple H took a brief sabbatical from in-ring competition. He returned later that year and would challenge John Cena for the WWE Championship at WrestleMania 22. He was not successful. But then Triple H teamed with Shawn Michaels and brought back one of the concepts that he did make a success: D-Generation X.

In January 2007, Triple H found himself on the injured list again and this time, he would miss a full eight months of action.

Once he returned, he went back to singles competition and defeated his former Evolution teammate Randy Orton in 2008 to win his 12th world title.

As a result of the 2008 WWE draft, Triple H found himself wrestling on Smackdown for the first time in six years. He lost the title to Edge at Survivor Series of that year, only to win it back in the Elimination Chamber of 2009. And he would later drop it to Randy Orton.

In the summer of 2009, Triple H reformed D-X with Shawn Michaels, but it just wasn’t working out this time around. The duo did win the Unified Tag Team Championships for a brief period, but went their separate ways once Michaels started focusing all of his attention on breaking The Undertaker’s undefeated streak.

After Michaels was forced into retirement when he couldn’t defeat The Undertaker at WrestleMania, Triple H also took some time away from the ring. The Game returned last year, trying to accomplish what his buddy couldn’t get done in previous years.

The match between Triple H and The Undertaker was an all-out war.

“They are two amazing pros, who are both Hall of Fame level competitors, with undying passion and resolve,” Ross said. “Their individual will and personal mindset overcomes any physical limitations that others may place on them.”

Though The Undertaker technically won the battle with his Hell’s Gate submission hold, many argue that Triple H actually won the war, as he left ringside on his own power, while Taker was literally carted away.

At WrestleMania 28, the two of them have a chance to settle it once and for all, and find out who really is the man.