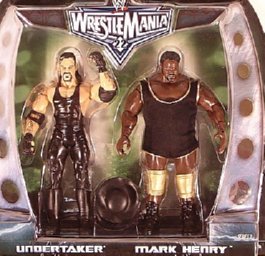 Where: The Allstate Arena, Chicago

No doubt WWE experienced a big sales run on these Undertaker and Mark Henry WrestleMania 22 figures.

Wrestling fans found out at WrestleMania 22 that death waits for no one; not even the World’s Strongest Man. It wasn’t as shocking to Mark Henry’s manager Daivari, who had already felt the wrath of The Deadman.

“It was up in the air about what they wanted to do for a Taker match at WrestleMania. At one point, there was a handicap match on the table with Mark Henry and The Great Khali against The Undertaker, but I think they (WWE) didn’t want to throw away two big angles at once,” Daivari said. “Because Taker is going to win at WrestleMania, so it’s not that smart business-wise, to get both guys in one match.”

Daivari is no stranger to WrestleMania himself. As a matter of fact, his big WrestleMania moment happened the previous year. He wasn’t booked in a match, but it was still a career highlight for him to be standing in the ring with one of the WWE’s biggest stars ever, Hulk Hogan.

“I’ve probably watched my WrestleMania bit about four times in my life, and it’s only the last time I saw it that I really have a chance to appreciate it,” Daivari said. “I thought the angle we did at WrestleMania was cool at the time, but I didn’t really get a chance to enjoy it as much as one would like to, because the machine never stops. I really couldn’t be hung up on how (great) the WrestleMania thing was, because then we had Raw the next night and then the annual post-WrestleMania European trip, then the pay per view. So the machine never really stops.”

Unfortunately for Daivari, he didn’t make it all the way to Chicago for WrestleMania 22. His trash talk had finally met its end on an episode of Saturday Night’s Main Event, in which he was Tombstoned on top of a casket, keeping him on the shelf until after WrestleMania.

“When I was managing Kurt Angle or Mark Henry or The Great Khali, as a character, I was able to write checks that my ass could cash in, because I was either standing next to the greatest wrestler in the world, or the World’s Strongest Man, or the largest athlete in the WWE. I was able to talk shit unmercifully to any talent,” Daivari said. “I was more of a pussy little brother, who does whatever he wants, because he knows his big brother would handle any problems.”

Mark Henry may be the biggest big brother that anyone can ask for, as he is legitimately the World’s Strongest Man.

Henry was a weightlifter, before ever trying his hand at professional wrestling. He first got noticed in the 1992 Olympic Games. Following that performance, he won a gold, silver and bronze medal in the Super Heavyweight division at the 1995 Pan American Games. The 1996 Olympics weren’t as kind to him however, as he placed fourteenth in the weightlifting competition, after suffering a major back injury.

The injury may have actually been a blessing in disguise, as Henry was then able to make a career for himself in the World Wrestling Federation. He was trained by former WWE Champion Bret “Hitman” Hart, as well as Leo Burke.

It seemed like Henry had a hard time adapting to the wrestling ring, but he was very eager to learn, and proved that over time, patience pays off.

He joined The Nation of Domination in early 1998, but soon branched out on his own as Sexual Chocolate. Between late ’98 and 2000, Henry was placed in several embarrassing situations and took a break from wrestling for a while.

He would return in 2002, after winning the Arnold Strongman Classic. In 2003, Henry was managed by current Smackdown General Manager Teddy Long, who represented several African-American athletes, who Long claimed were being held back because of their ethnicity.

Following an injury in 2004, Henry took another break from the squared circle. He emerged back onto the scene in 2006, and was set for a major program with Smackdown’s top star Batista. Unfortunately, Henry was victimized by bad timing again, but was still able to hold his position as Smackdown’s top heel, leading to the big WrestleMania match with The Undertaker.

“They (WWE) drew about four months worth of pay per views with Taker and Mark. And when they wrapped up, they got another four-six months out of Taker and Khali,” Daivari said. “That’s what WWE does best. They constantly maximize their potential revenue.”

“Being in there with Undertaker, you have respect, but you also have to have an uncontrolled aggressive nature toward him because, if not, he’ll eat you alive,” Henry told IGN.com in 2008. “I didn’t let the respect take it to the point where I was in awe. He still needed to watch himself being in there with me.”

To this day, Mark Henry is still one of the WWE’s top stars. But he will always remember his WrestleMania match with The Undertaker, because all of the video highlights of The Undertaker’s undefeated streak will never let him forget it.