The Streak: Again, Kane is not able 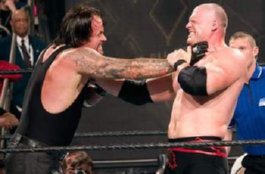 Undertaker and Kane, WrestleMania Round 2.

The theme for WrestleMania 20 was “Where it all begins again,” which was quite appropriate, considering that the feud between The Undertaker and Kane had seemingly come around full circle. Veteran WWE announcer Jim Ross, who called the first WrestleMania match between the feuding half-brothers, was thrilled to call this one as well.

“I was honored, as I always am, to broadcast any Undertaker match,” Ross said.

The WrestleMania theme applied to this match specifically, as The Undertaker, who had competed with a biker gimmick for the previous four years, was reverting back to his old Phenom persona. He even had long-time manager Paul Bearer by his side.

Kane had also gone through somewhat of a transformation in the months leading up to WrestleMania. He was now competing without a mask and exposing a darker, more evil side of his character.

The last WrestleMania match between these two was too close to call. So it’s only natural for a rematch to be in the cards and it was only a question of “When?” With 20 being a significant number, it made perfect sense for the rematch to happen at this event.

Following that WrestleMania 14 match, Kane had gone through some drastic changes.

But before changing characters completely, he captured the World Wrestling Federation Championship from “Stone Cold” Steve Austin; a title change that was highly forgettable, as it only lasted 24 hours.

Kane was later forced to join Mr. McMahon’s Corporation in early 1999, after several threats of being sent to an insane asylum.

A more ‘human’ side of Kane was seen, when he won the WWE Tag Team Championships with X-Pac (Sean Waltman) in the spring of ’99. He also began speaking during this period.

Kane then returned to his monstrous ways, before reuniting with The Undertaker, forming a tag team known as The Brothers of Destruction.

From 2002-03, Kane was floundering in the tag team division. After unifying the Intercontinental and World Heavyweight Championships in a losing effort against Triple H, Kane won the Tag Team Championships with Rob Van Dam.

He was then forced to unmask, after being defeated in a match by Triple H. As a result of the unmasking, Kane turned heel, due his own psychological insecurities, and began terrorizing the Raw locker room, before eventually setting his sights on his own brother, The Undertaker.

This event opened Kane’s eyes a bit, and was clearly too much for him to handle, as it only took one Undertaker Tombstone to put him away this time. The appearance of The Undertaker at WrestleMania 20 quickly had fans on their feet, as many were overcome with feelings of nostalgia.

“I try not to overthink or overanalyze the process, and react as it occurs and how it touches me as a fan,” Ross said. “It was at Madison Square Garden and it was the 20th WrestleMania. Enough said.”