The Streak: The Legend Killer gets Tombstoned

Where: The Staples Center, Los Angeles 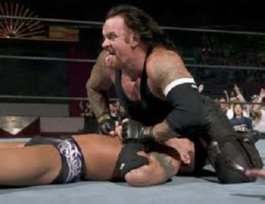 … and that’s the end for Randy Orton at WrestleMania 21.

Since his debut in 1990, The Undertaker has always been known as The Deadman. But at WrestleMania 21, he refused to die at the hands of The Legend Killer.

“Undertaker’s one of the best to have ever been in there,” said WWE Hall of Famer Bob Orton Jr. “They call him The Phenom and he was exactly that; phenomenal.”

Randy Orton has always been big on destiny, which might be the most appropriate word to associate with him, because considering his last name, he was destined for greatness.

Other than The Rock, it would be safe to say that Randy Orton is the most successful third generation superstar of all time. And obvious comparisons have been made to his father Cowboy Bob Orton Jr. and even his grandfather Bob Orton Sr. Randy’s uncle Barry Orton was also a wrestler.

When Orton came to the WWE straight out of the military, he was immediately labeled a “blue chipper.”

Though his rookie year wasn’t the greatest, Orton quickly got noticed after joining one of the greatest factions of this generation, Evolution (Ric Flair, Batista, Triple H and Orton). He then adopted the moniker The Legend Killer, making him stand out from the group. At the time, people were already calling him the future of the business.

Orton’s quick rise to popularity got him excommunicated from Evolution. Of course it didn’t help matters when he won the World Heavyweight Championship from Chris Benoit at SummerSlam 2004, becoming the youngest man in history to win that title at only 24.

Orton feuded with his former Evolution teammates in the fall of 2004, but wasn’t really clicking as a babyface.

There was obviously no reason to ignore the fact that fans were already not into him, before he even entered the program with The Undertaker, so WWE Creative instantly turned him heel.

Since The Undertaker was perhaps the most legendary full-time performer on the roster, it made sense for him to be paired in a program with Orton.

Although the long-term booking might have left a lot to be desired, the actual WrestleMania match did not disappoint. Even Randy’s father was excited to be involved in it.

The younger Orton tried everything in the match, but couldn’t quite put The Deadman away. Even interference by Bob Jr. with his long-lost cast didn’t get the job done. But Bob enjoyed it nonetheless.

“Randy came along pretty good,” Bob Jr. said. “He had already learned so much from Flair and H by that point. So by the time I got there, I was asking him what I should be doing.”

Unfortunately, Randy Orton’s arrogance got the best of him, as he attempted to utilize The Undertaker’s own Tombstone piledriver. Taker quickly shifted his weight and ended up drilling Orton with the move instead.

As a result, The Undertaker picked up his 13th WrestleMania victory.