The Streak: Superfly first to fall

Any gambler knows that seven is usually the luckiest number. But Wrestlemania 7 was not so lucky for Superfly Jimmy Snuka, who became the first chalk mark in the win column of The Undertaker’s WrestleMania record. And Snuka had no problem with that. 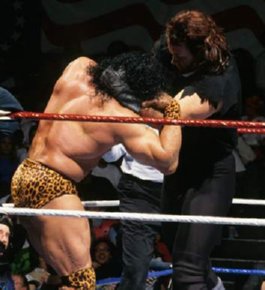 The Undertaker tangles with Superfly Snuka.

“I had a good time working with him. I thought he was great,” Snuka told SLAM! Wrestling. “He’s a really awesome guy. He’s very classy and down to Earth.”

It seems appropriate that Los Angeles hosted the event that year, as it’s been known as the city where stars are born. And Snuka agrees that no star shines brighter than The Undertaker.

“I’m not a glory guy, so I didn’t mind being the first one,” he said. “I kind of predicted that he would be a big star.”

Before The Undertaker came along, Snuka had his own run of success.

He was a bodybuilder before ever entering professional wrestling, so it’s no surprise that his impressive physique stood out like a sore thumb in the squared circle.

Snuka competed in the NWA and Mid-Atlantic territories before finally ending up in the World Wrestling Federation in 1982.

He served as a corner man for Hulk Hogan and Mr. T in the main event of the first WrestleMania and participated in the most famous or perhaps infamous Piper’s Pit segments of all time, where he had a coconut smashed over his head by Roddy Piper.

Most people, including a young Mick Foley, would remember Snuka best for his incredible leap off the top of a steel cage onto a vulnerable Don Muraco in 1983.

Unfortunately, Snuka’s high-flying offence may have actually cost him the match with The Undertaker, as he attempted a springboard move, only to be caught in the waiting arms of the Deadman and then driven into the canvas with the Tombstone piledriver.

WrestleMania 7 was Snuka’s last Wrestlemania match for 18 years — he returned for an Elimination Handicap match with Ricky Steamboat and Piper against Chris Jericho at WrestleMania 25 — but he clearly understood business, as he took no exception to putting over a future star on his way out.

“I always enjoy watching him (Undertaker),” Snuka said. “I was the first one he beat and I was happy to take care of a brother.”

Although nobody could have predicted that the undefeated would have been such a big deal at later WrestleManias, Snuka had no doubts that The Undertaker would definitely be a big deal, if he wasn’t already at that time.

“I would like to see the streak keep going,” Snuka said.