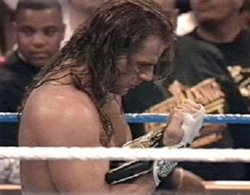 How do you settle the score between two of the greatest wrestler of their era? Why have a 60-minute Iron Man match in the main event of WrestleMania.

That’s exactly the direction WWE went in 1996 when Bret Hart defended the World Wrestling Federation Championship against Shawn Michaels. It was a match the company had never been done before, but the two managed to pull it off.

Michaels made one of the more spectacular entrances in WWE history, gliding down from the rafters into the crowd and then making his way through the crowd and into the ring. The more reserved Hart made his standard entrance.

After failing to gain the title the previous year at WrestleMania XI, Michaels made no mistake about it in overtime, finally putting Hart down with Sweet Chin Music, capturing his first world championship in the process.

After the World Wrestling Federation Championship was held up due to a controversial finish in a match between champion Hulk Hogan and Andre the Giant (not to mention Andre selling the title to Ted DiBiase), WWF President Jack Tunney declared the title vacant with the new champion to be decided in a 14-man tournament at WrestleMania IV.

For Savage, it was a long road to the title. After defeating Butch Reed in his opening round match, he went on to face Greg “The Hammer” Valentine in the quarterfinals. He getting past the future WWE Hall of Famer, Savage moved on to face the One Man Gang in the semifinals, winning by disqualification.

His opponent in the championship match? None other than DiBiase, who cruised to the finals after receiving a bye in the semifinals after the match between Hogan and Andre went to a double disqualification.

With Savage struggling against the numbers game presented with Andre in DiBiase’s corner, his manager Miss Elizabeth went to the back and grabbed Hogan to be in Savage’s corner. With Savage in the Million Dollar Dream and the referee distracted by Andre, Hogan came in and walloped DiBiase in the back with a chair, breaking the hold. Savage would go to the top, hit his flying elbow drop and pin DiBiase, capturing his first world title, which he would hold for the next year. 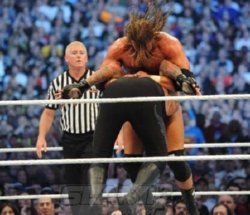 No. 14 – Triple H pushes The Undertaker to the limit

For one moment, everybody thought The Undertaker’s vaunted WrestleMania undefeated streak was going to end. Triple H hoisted Taker up in Taker’s signature move: The Tombstone Piledriver. He drove Undertaker down into the canvas and covered: One … two … kick out!

“What did we just see?!” Jim Ross exclaimed.

It was an epic match between two sure-fire Hall of Famers that was as dramatic as any match in WWE history, in fact maybe the most dramatic. The two did everything in their no holds barred match. They went through Michael Cole’s “Cole Mine.” They went through an announce table. Chairs were involved. Pedigrees were kicked out of, Tombstones were kicked out of. These two put their bodies through hell, there’s no doubt.

Battered and bruised and barely in it anymore, the Undertaker had one last gasp in him to move The Streak to 19-0. With Triple H stalking with his sledgehammer, Taker reached up, grabbed Triple H and locked in the Hells Gate submission. After a long, prolonged struggle, Triple H was finally forced to tap.

Both men laid on the canvas for a long time after the match. Triple H eventually got to his feet and walked to the back while Undertaker had to be carted off after being pushed to the limit by Triple H. The two will rematch this Sunday at WrestleMania 28.

The moment: The Austin Era has begun!

It almost goes without saying that the wrestling war between WWF and WCW changed on one night, March 29, 1998, the night “Stone Cold” Steve Austin captured the World Wrestling Federation Championship for the first time.

It was one of the biggest matches in WWF history. With former world boxing heavyweight champion Mike Tyson as the special ringside enforcer, the eyes of the sporting world were on FleetCenter that night for the changing of the guard in the WWF.

With Michaels nursing a severe back injury that would keep him out of the ring for more than four years, the two got right after it. In the end, Michaels would go to the top rope and hit his signature elbow drop. He would get up and call for Sweet Chin Music. Austin ducked it, went for the Stunner, but Michaels countered that. He went for another Sweet Chin Music, but Austin caught the leg, spun him around and hit the Stone Cold Stunner. With the referee down, Tyson got in the ring and counted three, giving Austin the championship and changing the wrestling world forever. 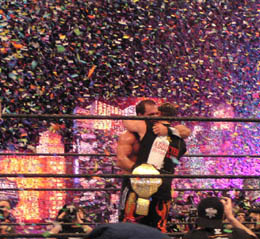 Undoubtedly, this is probably the most emotional moment in WrestleMania history, it’s unfortunate we can’t remember it the way we did when it first happened.

After winning the 2004 Royal Rumble, Chris Benoit moved to Raw which setup a triple threat match for the World Heavyweight Championship at WrestleMania XX featuring Triple H defending against Benoit and Shawn Michaels.

Without a doubt, this was also one of the great matches in WrestleMania history. It didn’t take too long before Michaels was a bloody mess with Triple H joining him soon after. This match is one of those that has to be seen. After being double suplexed by Triple H and Michaels through an announce table, Benoit made his way back into the ring after several minutes.

Benoit locked in the Sharpshooter on Triple H but was saved as Michaels came back in and drilled Benoit with a super kick, but Benoit kicked out at two. Michaels went for another Sweet Chin Music on Benoit, but he ducked and sent Michaels over the top. Triple H came from behind and went for a Pedigree, but Benoit countered and locked in the Crippler Crossface. The two had an epic struggle with HHH rolling through but Benoit holding on. Finally, Triple H tapped, giving Benoit the championship.

After having his hand raised and going to the middle rope to celebrate, he came off and turned around to see his best friend, WWE Champion Eddie Guerrero, standing there. The two, shedding tears of joy, embraced in the centre of the ring, both standing there as WWE world champions as confetti fell from the ceiling.