The Streak: Whooo! A battle with the Nature Boy 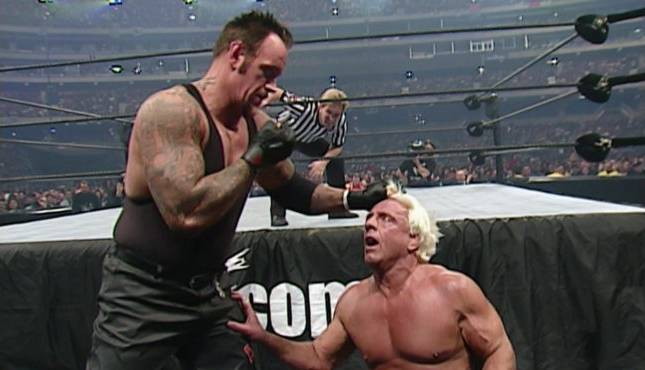 It’s been said that in a decade, a man becomes a legend. But before he could truly achieve that legendary status, The Undertaker’s undefeated WrestleMania streak was put to the test at WrestleMania 18, against one of the sport’s most legendary figures, Ric Flair.

“Regardless of what I’ve done to him or said about him, Ric Flair, beyond a shadow of a doubt, is a true icon in this profession,” Undertaker said in a WWF.com interview at the time.

Following the buyout of WCW by the World Wrestling Federation in 2001, there were a number of talents that the WWE (then WWF) had its eye on. But Flair was definitely one man on the other side of the tracks that most WWE performers considered a dream to work with. The Undertaker’s wish came true at WrestleMania 18 in Toronto.

“It was a great thrill for me to be in the ring with a legend, and you can’t say anything other than that; he is a legend,” Undertaker told WWF.com. “When I think of a World Champion, Ric Flair is the first name that comes up. So to be paired with him on the grandest stage of them all, it’s a rush, no doubt.”

Flair’s list of accomplishments is endless, and may actually be impossible to duplicate.

He won his first World Heavyweight Championship 31 years ago from Dusty Rhodes. Since then, he would win heavyweight gold on 15 more occasions against some of the best in the world.

Though Flair entered the WrestleMania 18 match as a babyface, some of his best work was as a heel; particularly when he led the greatest faction of all time, The Four Horsemen, who will all be inducted into this year’s WWE Hall of Fame.

Flair also won the 1992 Royal Rumble match, which was the first and only Royal Rumble for the World Wrestling Federation Championship.

After returning to the WWE in 2001, Flair was originally assigned to a non-wrestling role; he was the co-owner of the WWE in storyline. But the feud between himself and The Undertaker became very personal, as Taker had viciously attacked Flair’s best friend Arn Anderson and also Flair’s oldest son David, which eventually forced Flair back into the ring to avenge his family’s honor.

The match was certainly a highlight of that year’s WrestleMania. The no disqualification stipulation worked well in The Undertaker’s favour, and despite outside interference by Arn Anderson, Undertaker was able to put Flair away with the Tombstone, which was used less frequently, after the change in character.

“Actually, my knee was a little screwy and my lower back was a little tight from the superplex and getting thrown off the top rope,” Undertaker told WWF.com. “So when I went for the Last Ride, I didn’t really have the right amount of strength to get him where I needed him, and then I fought it, so I had to improvise and go to Plan B, so I used the move that no one’s ever kicked out of. Well, Kane did once, but 99 out of 100 people, they get Tombstoned and then don’t get up. At that point in the match, it’s WrestleMania, and I thought it was a perfect time to have a little retro Tombstone.”

This may have actually been the first time that the streak became a WrestleMania draw.