For months, TNA World Heavyweight Champion Bobby Roode and the company’s authority figure Sting have been at odds. Finally, after months of going back-and-forth with things getting physical at times, they finally meet in centre ring in a non-title, no holds barred match. Also on the show is another grudge match, this one between Kurt Angle and Jeff Hardy.

Much to Roode’s dismay, Sting surprises the champion in the early portion of the match (with the crowd chanting “you still got it” to Sting multiple times). Roode takes a walk but Sting comes up and knocks him down on the ramp and brings him back to the ringside area. They are making liberal use of the no holds barred stipulation here. Sting hits a Stinger Splash onto Roode, who was against the guard rail. Sting stalks Roode but Roode pokes him right in the eye and drags him and wrings his leg around the post.

Roode going to work on the knee now and the offense is making it hard for Sting to mount any offense. Roode works a Figure Four and has it locked in for a long time before Sting finally reverses it, making Roode grab the ropes. Roode goes for chops and Sting Sting’s Up, no selling Roode’s offense. He gets going with some clotheslines and flips Roode over with a back drop. He goes for the Stinger Splash but Roode moves and goes to the top rope. Sting, though, cuts him off and hits a superplex.

Roode, though, takes over and introduces a chair. Sting counters him and goes for the Scorpion Death Drop, but as he hits it, he never saw the steel chair and hits the back of his head hard on the chair. Roode rolls over and covers for the win.

After the match, Roode accosts Dixie Carter and grabs her out of the crowd and brings her into the ring. Sting knocks Roode out of the ring but Roode comes back and hits him with a chair and duct tapes him to the ropes in the corner. He manhandles Dixie some more, bad mouths her a bit and rubs Sting’s face paint onto her. Nobody wanted to help.

The next TNA pay-per-view is Lockdown on April 15.

After an opening video package, Mike Tenay and The Tazz welcome us to Victory Road, an eight-match card from Orlando, Fla.

In the opening bout, James Storm maintained his position as the No. 1 contender for the world title by defeating Bully Ray in a quick match with the Last Call Superkick.

Ion goes to do a pendulum elbow but he wastes far too much time and Aries moves. Inverted atomic drop and some strikes connect for Aries. Ion, though, loads Aries up to the top after spraying hair spray in his eye. He goes for a superplex but Aries knees Ion in the head and comes over the top with a power bomb. Both men down and Aries gets up and goes after the referee, thinking it’s Ion. He finally gets ahold of Ion, hits the brainbuster and follows with the Last Chancery and that’s it.

Story early-on is that Crimson won’t tag Morgan in no matter what. Even though Crimson is in control of the match. Usually teams isolate their opponents and use frequent tags, remember? Well, Crimson isn’t doing any of that. Magnus starts to make a comeback and both men are down. Magnus makes the tag and Crimson walks right over to Morgan, gives him the business and then doesn’t tag him. Joe in and he’s on fire and Morgan has to tag himself in as Crimson is getting the worst of it.

Morgan rolling now and loads up for the Carbon Footprint only to have Crimson tag himself back in. Now the two start arguing and Morgan tags himself back in. They argue and Crimson walks off. Morgan flips him off and drops an F-bomb only to be overtaken by the champs until Crimson comes back in and spears Morgan. He walks off and Magnus and Joe finish him off with the snap mare and elbow combo.

Devon comes out of the crowd to accept Robbie’s open challenge and he starts the match on fire. Robbie briefly has some offense but Devon hits a big shoulder block and then another. Robbie is reeling. Neckbreaker connects, followed by a corner splash and a jumping clothesline. He knocks Robbie T off the apron. Robbie E comes up to try to roll him up, but Devon hangs on and grabs Robbie and hits a tree slam. It’s over. New champ!

Rayne knocks Kim off the apron and into the guard rail in the early going after the two tried to play buddy-buddy for the first minute or so. Northern Lights Suplex connects for two for Rayne. Kim, though, fires up and yanks on Rayne’s foot and hurts her knee. Kim gets going with clotheslines. She hits a springboard crossbody for two. She hits the flying body block and goes to the top and hits a missile dropkick. No one in the crowd cares about any of this. She goes for Eat Defeat but Rayne counters. They trade pinfall attempts and Rayne hits a neckbreaker.

Rayne dominating but Kim hits Eat Defeat out of nowhere and gets it.

Styles and Anderson in control early, with Styles hitting a delayed standing vertical suplex on Daniels. That doesn’t last long, though, as Daniels and Kazarian take over, namely Daniels, who is doing all the work. Daniels absolutely flattens Styles with a kick to the face. He brings Kazarian in and Kazarian monkey flips Styles, but he lands on his feet and clotheslines Daniels and hits the Pele. He finally tags in Anderson and here he comes.

Anderson loads Kazarian up for the plunge and does it on Daniels. But the numbers game soon catches up for a brief period. Daniels breaks up the Mic Check and Styles hits the flying forearm on Daniels and then a leaping one on Kazarian. Daniels, though, hits Styles with a boot to the face and all four men are down. Daniels goes to the outside and Styles tries to hit a slingshot crossbody but Daniels moves. Kazarian goes to work on Anderson but Styles blind tags his way in. They quickly trade reversals that ends with Styles hitting the Styles Clash for the pin. Great finishing sequence.

Angle in total control. Hardy fires up and throws Angle into careening the steel steps and over. Hardy goes for Poetry in Motion but crashes and burns into the steel railing after Angle moves. Hardy slowly gets back in the ring and Angle continues to ride him. Rear headlock for Angle now. He follows that with a belly-to-belly suplex and it remains all Angle here. Total domination so far.

Hardy gets going and now both men are slugging it out. Hardy taking over. He hits Whisper in the Wind for two. Angle, though, hits the three Germans. He tries to follow with the Angle Slam but Hardy turns it into the Twist of Fate. He goes to the top looking for the Swanton Bomb but takes too long and Angle runs up and throws him off the top.

Straps come down for Angle and he locks in the ankle lock. Hardy turns it over and pushes himself free. Angle charges in the corner but Hardy side-steps it and Angle goes running shoulder-first into the ring post. Hardy hits the Twist of Fate but Angle barely gets his shoulder up in time.

They end up on the outside and Hardy rams Angle’s head into the steel steps multiple times. He throws him back in the ring and goes to the top. Angle tries to run up but Hardy fights him off. He goes for the Swanton but Angle gets his knees up. Angle up and he hits the Angle Slam for two. Angle chokes Hardy using Hardy’s own arm sleeve. He goes for another Angle Slam but Hardy counters into the Twist of Fate, but he can’t capitalize.

Hardy puts Angle down and hits a long-range Swanton. He goes for a cover but Angle rolls him over and grabs the middle rope for the pin.

Matt Bishop can be reached at [email protected]. Please include your name and hometown. Click here to follow Matt on Twitter. Should be a good one!. 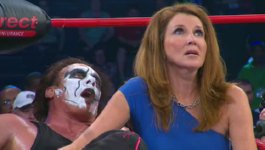