MONTREAL — WWE champion CM Punk rightfully praised a hot crowd on Friday night: “With Wrestlemania on its way, with so many shows, packing, unpacking, doing laundry on the road, not being home, to hear the crowd react so much for every single match tonight makes it all worth it. Thank you Montreal! Let me hear it one more time. You’re a helluva crowd!” 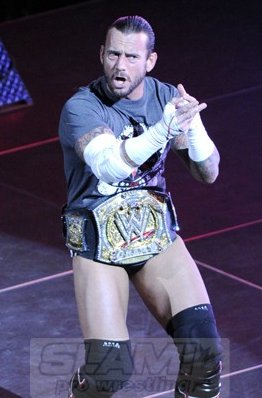 The last time Montreal welcomed WWE to the Bell Centre was 18 months ago. The fans in attendance this go-round made sure this would not happen ever again. Right from the get go, as soon as the lights turned off, they made their presence felt. Vickie Guerrero was the first one to show up on the stage and she got so booed that you couldn’t hear what she had to say. Then it was Santino Marella’s turn and he got cheered so much that at the end of the night, he outclassed the likes of CM Punk, John Cena and Randy Orton for the biggest pop of the evening.

The fans made it clear they wanted something better or bigger than a house show. The last pay-per-view in Montreal was on September 13, 2009 for Breaking Point — which was far from being the best PPV that year or any year — and the last TV tapings were held on September 18, 2006 with both the Raw and Smackdown! Superstars for a SuperShow.

They were hungry to see a WWE show, to see the WWE Superstars and they reacted in that sense. During the second half of the show, the ring announcer Justin Roberts said that the WWE was happy to be back in Montreal and they were looking to come back in a near future. The company won’t have any other options.

In hockey, commentators will say that the crowd is the seventh player on the ice. Well tonight, the crowd was as useful to the wrestlers. Sometimes a great reaction from the crowd will upgrade a show and this is exactly what happened. They were reacting to nothing and everything. Hip tosses were getting a pop!

It’s not like the wrestlers were having an off night, far from it actually.

But the guys (and girls) didn’t have to do much. Every match was basically booked; babyface shine, heat, sometimes a double take down, comeback, some false finishes and then the real finish. It was easy as 1-2-3. This show won’t be classified as the best ever. No. It wasn’t at the same level as a Raw, Smackdown! or a pay-per-view. But they didn’t need to go that far; they didn’t need to do more than that. They just had to work the crowd — which they all did — and the thousands of fans were reacting like if they were 20,000. It was a well-paced show that lasted about two and a half hours with an intermission. It was also a well booked show from top to bottom.

If the last house show in Montreal, on October 31, 2010 drew only 5,900 fans, this one did a lot better, probably between 8,000 and 10,000 which is a big crowd for a house show. The merchandise tables were all full from the opening up until the first match and then again at the intermission. A lot of T-shirts were bought, mainly Punk’s, Zack Ryder’s and Ziggler’s, with the latter adding something for the fans. 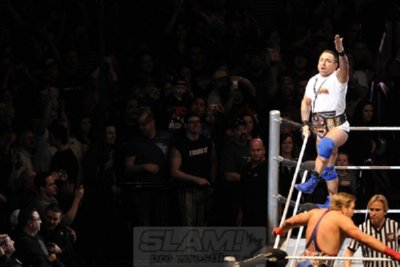 Santino Marella, the U.S. champion who defeated Jack Swagger, was the most over of anyone in Montreal.

The first 50 fans to buy a Ziggler T-shirt were allowed to get a picture with him and an autograph, something WWE hasn’t done too often. As for the Santino Marella’s green cobra gloves, a woman in charge of the concession stands told SLAM! Wrestling that they only got about 10 gloves for all of the stands and obviously and that they sold out in minutes. Santino was right in my interview with him — you had to be fast to get any!

Montreal fans have always been known for their great reaction towards the show, for being so involved and so particular at the same time. Either it was to insult Lita in French, to chant “You Screwed Bret” at Vince McMahon or to simply cheered Hulk Hogan for so many minutes; you could count on them to react to every single detail. And it was great to see this kind of crowd back, after a hiatus of a few shows. What Punk said at the end was exactly the feeling many had leaving the show; it was indeed a helluva crowd!

Here are the quick results of the show.

They showed a video package of The Rock and John Cena and surprisingly, both of them were booed, Cena more than Rock.

R-Truth beat The Miz with his Little Jimmy. Before the match, Miz did a great French promo saying that he hated Canada, hated Montreal, hated to speak French, hated poutine (Quebec’s meal made of fries, gravy and cheese) and the Montreal Canadiens.

Beth Phoenix & Natalya defeated Eve Torres & Tamina. Before the match, Eve did a promo where she apologized to Zack Ryder. She didn’t wrestle at all and when Tamina was looking to tag her near the end, she simply took off.

World Heavyweight champion Daniel Bryan defeated The Big Show and Randy Orton in a triple-threat match. The finish saw Orton RKO’ed Show, but Bryan threw Orton to the outside and pinned Show. After the match, Orton RKO’ed Bryan and Show threw his WMD at Bryan.

John Cena defeated Kane in a Last Man Standing Match after he did his Attitude Adjustment to Kane through a table. Cena got mixed reactions from the crowd when he first came down the aisle, but the finish got him a much better pop. He got the biggest reaction on the show, but the crowd was divided.

WWE champion CM Punk beat Dolph Ziggler w/Vickie Guerrero with his GTS. Best match of the evening. At one point the referee banned Vickie because she broke a count by putting Ziggler’s leg in the ropes. After a ref bump, Jericho interfered in favour of Ziggler, but the latter couldn’t capitalize on it. Punk hit Jericho with a high knee and then went for his GTS on Ziggler for the win.