Santino thanks the fans for the renewed popularity

Santino Marella is nearing the fifth anniversary of his WWE debut, and is celebrating a renewed push as U.S. champion heading into WrestleMania. He knows he has been fortunate to get back into the limelight, and gives credit where credit is due. 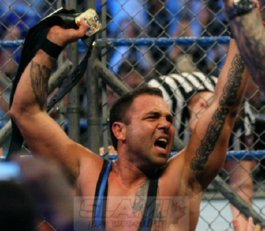 Another fortunate turn of events for Marella was when he got called in to replace an injured Randy Orton in the Elimination Chamber match for the World Heavyweight championship in February.

“That’s how it works, somebody get hurts and another one takes the opportunity.,” Marella said. “Randy Orton is one of my best friends in the business, so I had mixed feelings, but Randy was very happy that I was the one getting this opportunity.”

Marella made the most of the opportunity, and was the last one to be eliminated from the Chamber. Two weeks later, on the March 5th edition of Raw, he won the U.S. title against Jack Swagger.

But what is so appealing about the character that is Santino Marella?

Does it have anything to do with WWE being more PG oriented?

“That’s a very interesting question, it’s the first time I get asked this,” said Anthony Carelli, a native of Mississauga, Ontario. “I think it’s good timing. I bring comedy, but at the same time, I’m not vulgar, sexual, I don’t use bad words. There are guys working for WWE for 20 years, cameramen, soundmen, whose wives didn’t watch wrestling in a longtime but started again when they saw me wrestle. You don’t have to be a pure wrestling fan to enjoy watching wrestling. I know grandmothers who love to see me wrestle. My character is appealing to a large audience because of that.”

On his first day at the office, back on April 16, 2007, Marella won the Intercontinental title in Milan, Italy from Umaga, quite an unusual start. But his character has evolved tremendously from the fan picked from the stands.

“At the beginning, Santino was hard to describe, he was just a guy, an Italian guy, but just a guy. And there’s so many guys that are just guys,” began Marella. “So I started as a babyface and the comedy began when I turned into a bad guy. I was doing more comedy stuff and when I became a good guy again, they told me to keep that comedy, to not change, but to use it differently and it worked.”

While most recognize that his work name is a tribute to the late Hall of Famer Gorilla Monsoon (real name Robert Marella), who is behind his finishing move that fans are raving about, the Cobra Strike?

“I was in a bar in Japan with a friend of mine who didn’t speak English and I don’t remember if he was calling it Cobra, but anyway, he showed me how to do it. And you know, I forgot about it. And one day, I was talking to John Cena and I said: ‘Watch that move I’m gonna try tonight.’ He thought it was great. And then, it became really over within the guys, they really loved it.” 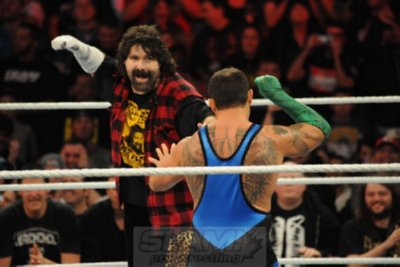 Naturally, the green cobra gloves are available at the WWE merchandise tables and online.

“And there are half the price of the t-shirts, so a family can buy them for their kids as it’s less expensive,” pitched Marella. “Plus, I think the company that is producing them is on strike so they have a very limited amount they are bringing at each shows. So fans need to be fast if they want one, because it’s selling out.”

With WrestleMania on April 1, what fans can expect from Santino, as he’ll be the captain of Team Teddy Long against Team John Laurinaitis.

“There’s so many serious matches like Rock and Cena, Triple H and Undertaker, Punk and Jericho. Our match, it’s gonna be pure entertainment,” answered Marella.

But before WrestleMania, Santino is defending his U.S. title against Jack Swagger tonight at the Bell Center in Montreal. “I’m there to keep my title of course. The fans can expect a good mix between wrestling and comedy.”

Marella also wanted to take this opportunity to share his love for Montreal.

“Montreal is one of my favourite cities around the world. Tonight, I’ll go out on St-Laurent, St-Denis, Prince-Arthur, Old Montreal … I love Montreal,” said Marella with a very good French accent. He even greeted yours truly with a nice “Comment ça va?” to start the interview.

“My grandfather was French so I’m 25% French!” laughed Marella.

A month shy from his fifth anniversary in the WWE, it’s a sure thing to say that Santino Marella became one of the best entertainers out there.

“I was told when I first started that an average new superstar last two to three years, so yes, five years next April is quite something and I just feel like my momentum is growing,” concluded Marella. “You know, sometimes, it takes time to get to the heart of the fans.”