The Streak: Two is not better than one

The result: Win over A-Train and Big Show; WrestleMania record, 11-0 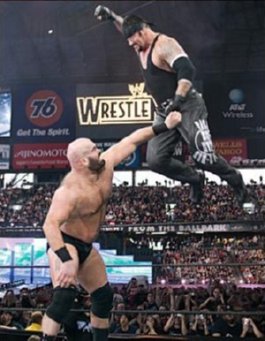 The Undertaker comes down the track onto A-Train.

At WrestleMania 19, The Undertaker found out that two heads are indeed better than one. But despite those odds, The Deadman did not back up an inch, as he turned back the challenge of his two gigantic opponents, A-Train and The Big Show.

Due to last-minute creative changes, Taker’s scheduled tag team partner Nathan Jones was removed from the match. But the handicap certainly told a better story than just a regular tag match.

The Undertaker is no small man by any means. But considering the size of his opponents in this bout, the two-on-one disadvantage might have been the least of his worries.

At seven-foot-two and 451 pounds, any time Paul Wight (Big Show) walks into a room, people will take notice. He is legitimately the largest athlete in the world, which has given him a significant advantage over everyone else in the business.

When Wight (then known as The Giant) entered WCW in 1995, he was pushed to the main event right away. In fact, he won the WCW World Heavyweight Championship from Hulk Hogan in his very first match.

Wight was a member of The Dungeon of Doom at the time, and later joined the New World Order. Between 1997-99, Wight had switched between babyface and heel so frequently that he almost became irrelevant. But fortunately, he was wise enough to sign with the WWE (then WWF), before allowing that to happen.

Wight started his career in the WWE as a member of Mr. McMahon’s Corporation. Later that year, he won the Tag Team Championships with The Undertaker and then defeated Triple H for the WWE Championship.

Wight’s rookie year in the WWE was obviously very kind to him, and he went on to main event the following year’s WrestleMania.

Wight was removed from WWE television for the better part of the year 2000 and sent to the WWE’s developmental territory, Ohio Valley Wrestling, in an effort to improve his physical fitness and drop weight.

He returned triumphantly the following year and had significantly improved in the ring, thanks in part to his noticeable weight loss. Wight would then have another run with the WWE Championship in late 2002. It didn’t last long, but it served its purpose, which was to get Wight back on the map.

A-Train was definitely the most popular gimmick that Matt Bloom ever had … at least in North America; In Japan, he currently competes as Giant Bernard and has been very successful. He got his big break in 1999 (the same year that Big Show debuted for the company) as Droz’s personal tattoo artist.

Bloom later teamed with Test as T & A, a duo managed by newcomer Trish Stratus.

When the team fell apart, he had a brief run as a babyface in late 2001, and finally clicked with his A-Train gimmick, following the WWE draft in mid-2002.

This past Monday on Raw, Bloom’s new WWE gimmick was unveiled — Lord Tensai.

Although Nathan Jones was taken out of the actual WrestleMania match, he was hugely involved in the finish, delivering well-placed kicks to the faces of both A-Train and Big Show.

After a tiny struggle, Taker finally got A-Train up and planted him with the Tombstone, improving his WrestleMania record with one more win.