It was a ring and some lights. Nothing more, nothing less. To get the complete production, you had to go to the big city and see a taping of Raw or Smackdown. 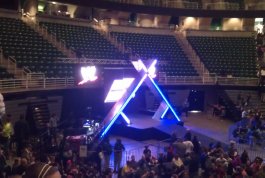 Last year, WWE implemented several changes to upgrade the production at its house shows and it’s without hesitation I can report these changes are absolutely for the better.

Saturday night’s Smackdown house show at Breslin Center, on the campus of Michigan State University, saw all these changes come to the forefront. Let’s take a look at the changes the company has made to its house shows.

Pre-show atmosphere: The national anthem played and then the WWE’s signature opening played on the video boards followed by the Smackdown intro video.

The only fallback to this is you have to have someone in charge of doing it. On several instances, videos started showing on the board without the accompanying audio, like in the instance of Bryan’s promo. The fans missed the first five seconds or so because they couldn’t get it together.

These changes definitely change the quality of a WWE house show, especially for a casual fan or families (which represent a large portion of WWE’s house show fan base).

All the things you come to expect from WWE house shows are still there, so don’t worry. Wrestlers still interact with the fans more (Mark Henry ripped a fan’s popcorn away and smashed it all over the floor. He also said “Go Blue” to get heat in East Lansing after fans were cheering him), they still cut promos in the ring, they still stall at every opportunity.

As for the show itself, it was good. Clocking in at two hours, 15 minutes, the show saw Daniel Bryan defend the World Heavyweight Championship by besting the Big Show and Orton in a triple threat match.