The Streak: Brother versus brother

Where: The Fleet Center, Boston 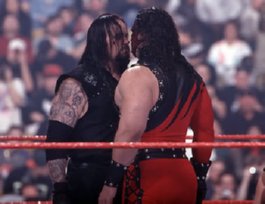 There have been many sibling rivalries at WrestleMania, but perhaps none more pronounced than The Undertaker versus Kane. There was indeed no brotherly love at WrestleMania 14.

“The execution of the Kane persona was nothing short of genius,” said WWE Hall of Famer Jim Ross. “It was the perfect fit for the individual, and tying Kane to the legendary Undertaker was spot on. It’s an example of a highly intelligent, hard-working and resourceful talent, taking a TV persona and making it his own.”

Though Undertaker and Kane were not legitimate brothers, their mannerisms were almost identical, to the point where casual fans and maybe even some regular fans would not even know any better.

The man behind the mask (Glen Jacobs) had tried so many other characters before finally making it big with Kane. Some people might be still trying to forget Dr. Isaac Yankem, DDS. Others may recall that he was also the fake Diesel, which surely had Kevin Nash rolling his eyes.

Prior to the WrestleMania where the two brothers clashed, there was a major angle, where Paul Bearer held a powerful secret over The Undertaker. The secret was eventually revealed that The Undertaker had burned his childhood home to the ground, murdering his family in the process, which included his younger brother.

But there was more to that story than met the eye, because Bearer then started claiming that the brother that Undertaker thought was dead, was alive and well. And not only that, but Undertaker’s brother Kane was out for vengeance.

Kane made his debut at the 1997 Bad Blood pay per view, costing his brother The Undertaker a Hell in a Cell match against Shawn Michaels.

In the weeks that followed, Kane would randomly attack everyone on the roster, until The Undertaker would accept his challenge to fight.

Taker refused at first, but was soon left with no choice, as Kane placed his brother in a casket and set it on fire.

“Getting to work with The Undertaker right off the bat was a tremendous opportunity,” Kane told Kevin Eck of the Baltimore Sun in September 2010. “It was an opportunity to be a career-maker, and fortunately I was able to take advantage of that.”

Before the match actually took place, baseball legend Pete Rose, who was actually the guest ring announcer, got the crowd completely riled up with insults, only to feel the wrath of Kane himself. Rose was simply just in the wrong place at the wrong time.

“Pete Rose was a nice sidebar in the presentation, but I never really thought one way or another on how the audience would respond to him,” Ross said. “There was no way that Pete Rose was going to get the fans to boo The Undertaker. The story was about Undertaker versus Kane.”

There were other occasions over the years where Kane did something similar to Rose, whose gamesmanship for the angles landed him in the celebrity wing of the WWE Hall of Fame, while barred from the Baseball Hall of Fame for betting on baseball.

In 2005, Kane told TJ Madigan of the Calgary Sun what it was like working with Rose. “Pete is actually a consummate professional, and it’s always been a joy to work with him. And it’s funny, because that’s become part of WrestleMania legacy, and who’d have ever thunk it. Here I am, the guy that got to induct Pete Rose into our Hall of Fame. I guess ironically, my career has been somewhat tied to Pete Rose. I have a great deal of respect for the guy.” 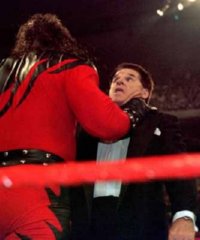 … except maybe beating up Pete Rose!

After Kane had disposed of Rose, the lights went out and the arena went silent, anticipating the entrance of The Undertaker, which has become another highlight of WrestleMania.

“I am equally amazed after all these years, every time Undertaker makes his entrance; especially at WrestleMania, where the streak has become a viable fabric of the mega event,” Ross said. “I still, after all these years, get goose bumps when I am able to experience the greatest entrance in all of sports entertainment; it never gets old to me. The production elements that add to Undertaker’s entrance are always amazing to me and continue to evolve.”

It took three Tombstones for The Undertaker to finally put Kane to rest. But even after Taker had seemingly exercised his demons, so to speak, Kane was the first to his feet, and ended up gaining a moral victory with a Tombstone on a steel chair in the aftermath of the match.

Nevertheless, the history books show a clean win for The Undertaker, who continued to move up in the pecking order.