No. 25 – McMahon amazingly has good matches

The moment: Vince McMahon gets beat up, never wins at Mania

WWE chairman Vince McMahon never trained to be a professional wrestler. But as the owner of the World Wrestling Federation, he often found himself involved in the storylines, most notably his long feud with “Stone Cold” Steve Austin. McMahon’s involvement in things often ended up with him in the ring (in 1999 alone, he won the Royal Rumble and became WWF Champion). As he got older, though, he saved his matches for the big stage — and boy did they deliver.

By all rights, no Vince McMahon match should ever be good. Yet, on the “Grandest Stage of Them All,” his matches have more often than not been very good. 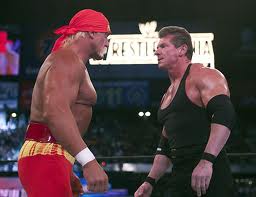 He started at WrestleMania X-7 with a match against his son Shane McMahon. This came a week after Shane had snuck in and purchased WCW, adding even more to an already anticipated match.

With Mick Foley as the special guest referee, the two brawled all around the ringside area. Shane loaded his father up on the Spanish announce table and went to the top rope for his signature elbow drop, but his sister Stephanie pulled their father out of the way, leaving Shane to crash and burn through the table.

After a brief catfight between Stephanie and Trish Stratus, McMahon put his “sedated” wife Linda into the ring and sat her on a chair in the corner so she could watch the beating he was going to put on Shane. McMahon threw multiple trash cans in the ring, beating Shane with them. He went for one more shot, but Linda rose from her chair and kicked McMahon low. Then Foley, who McMahon had hit with a chair, beat McMahon down in the corner, leading Shane to go coast-to-coast, drop kicking a trash can into his father’s face and picking up the win.

Two years later, it was “20 Years in the Making” as McMahon battled Hulk Hogan with Hogan’s career on the line.

This one, as Jim Ross would say, was definitely bowling shoe ugly. But somehow, someway, it was entertaining. It was an all-out brawl that saw both men bleed and even saw McMahon go to the top of a ladder and leg drop Hogan through an announce table.

Back in the ring, with both men down, a man in a black hat and black coat entered the ring. He stripped those off and was revealed to be none other than Rowdy Roddy Piper, making his return to WWE for the first time in seven years. Piper bad mouthed both men, spit at Hogan and kicked McMahon in the rear. He picked up the steel pipe in the ring and decided to level Hogan with it. McMahon would rise, land some more pipe shots and hit the leg drop, but of course, Hogan kicked out and started to Hulk Up.

Hogan would hit his punches, the big boot and then not one, not two, but three leg drops to put McMahon away. A match so much better than it had any right to be.

Three years later at WrestleMania 22, McMahon had been tormenting Shawn Michaels for months, leading to their, you guessed it, no holds barred match in Chicago.

As crazy as ever, the 60-year-old McMahon came to the ring and posed with his Muscle and Fitness cover. This was too much for Michaels to take, as he left the ring and the brawl was on. Michaels would beat McMahon up some and throw him in the ring while grabbing the magazine cover and busting it over McMahon’s head.

This, though, brought the Spirit Squad out and the numbers game quickly caught up to Michaels. He would fight them off, but it allowed McMahon to recover and take over the match. Michaels would rally until Shane McMahon came down and started beating HBK with a kendo stick. Shane would try to help Michaels join the “Kiss My Ass” club, but instead, it was Shane who took a big trip into his father’s backside.

After dispatching of Shane, Michaels grabbed the biggest possible ladder, set McMahon up on a table and put a trash can over his head. He climbed to the top of the ladder, flashed the DX sign and came down with a hellacious elbow drop. The medics would come down for McMahon, but Michaels would run them off and level McMahon with Sweet Chin Music, winning the match.

Why it was important: To be honest, of all the moments on this list, this one is probably here because I really enjoyed it. I can’t say anyone else has the love for these matches that I do (in fact, his match with Michaels is one of my all-time favorites), but there’s no doubt they exceeded expectations all the way around. With the use of a lot of smoke and mirrors, Vince McMahon was able to have three spectacular WrestleMania matches. The one with Michaels, the best of the three, also goes to show you how great Michaels was.

McMahon would try one last time with Bret “Hitman” Hart at WrestleMania 26 but unfortunately, the magic wasn’t there anymore. Still, he managed to have three memorable WrestleMania matches as he was approaching AARP eligibility. No small feat even with all the advantages he had.

Just before WM26, McMahon addressed his match with Hart, and the complications it brought to his dual role as wrestler and promoter. “It makes things more difficult,” Mr. McMahon admitted to the Connecticut-based Arts & Leisure. “I really much more prefer working behind the scenes as a director and a producer than being part of the action. I do hope this will be my last time in the ring, but I say that after every match I’m in. I’m 64 years old and while I’m in great physical condition and I never want to say never, I really don’t want to do this again.”