MONTREAL — On Saturday night, NCW Femmes Fatales presented its most important show to date, do or die for the local talent, competing against women from around the globe. The winners were not just the wrestlers, but the 200 or so fans in attendance.

Word of the success of NCW Femmes Fatales has traveled fast, and Pro Wrestling Ilustrated‘s Dan Murphy — the man behind the PWI Female 50 — made the trek to check out the action on the eighth all-women’s show at the Centre Sportif St-Barthélemy. 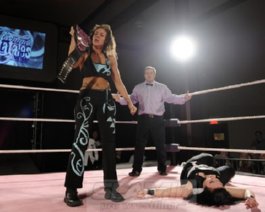 Mercedes Martinez considers the NCW Femmes Fatales International title she was denied during her bout with Kalamity. Photos by Minas Panagiotakis, www.photography514.com

Top of the bill was Kalamity, the NCW Femmes Fatales International champion, headlining her first show as champion. If that wasn’t enough, the undercard featured a former two-time WWE Women champion, Jazz, sporting her own title belt, the SHIMMER champion, Cheerleader Melissa, and a Mexican title belt holder, LuFisto, who also happened to be who Kalamity upset for the title.

Kalamity’s challenger was the “The Latina Sensation” Mercedes Martinez, whom many consider one of the finest women wrestlers in North America. It was a back-and-forth affair, and near the end of the match, Martinez took things in a decidedly heelish direction. After the referee was hit by Kalamity’s flying elbow, Martinez used a chair to try and win the title. Kalamity was able to reverse Martinez’s Fisherman buster into a small package for the win.

Post-match, Martinez continued to hit Kalamity with chair shots, until LuFisto came to make the save. The security had to pull them apart after several minutes of fighting. No doubt, this will build to a match down the line between Martinez and LuFisto, or perhaps a tag team bout with Kalamity as LuFisto’s partner.

“I was really nervous because I put a lot of pressure on my shoulders as the champion,” Kalamity told SLAM! Wrestling. “It was the first time I was defending it at a Femmes Fatales event, against such a competitor as Mercedes, so I was a nervous wreck all day, but I’m glad the match went well.”

It was LuFisto who got to take on Jazz.

“When everybody liked Trish Stratus, I was cheering for Jazz to beat her ass!” LuFisto said before the bout.

So while LuFisto may have felt it was an honour to wrestle one of her heroes, Jazz proved that she is still one of the toughest female wrestler out there. Providing a clinic on how to work as a heel, Jazz battered LuFisto inside and outside the ring.

The crowd climaxed when both wrestlers used their respective belts — DCW for Jazz and Lucha Pop for LuFisto) — and hit each other simultaneously with them. The referee called it a double DQ but both fighters continued to beat each other up as if the match never stopped. The crowd was chanting to let them fight and even some “E-C-W” chant could be heard.

Finally, the referee agreed to start back the match with Extreme rules, meaning no DQ. Finally, LuFisto beat Jazz with her Mangalizer on two chairs.

“I was really intimidated with her at first because she represents so much to me. But she was so nice, told me she heard that I was a strong babyface here, that I was a strong hitter myself and basically not to worry, everything was going to be fine,” LuFisto said after the match. “One thing’s for sure, she’s a real pro.”

Young Kira was wrestling in her first singles match at Femmes Fatales and really stepped up her game facing the “Rate Tank” Kellie Skater. Even though she lost the match, Kira showed very good upsides.

“She’s promising, very energetic and could be the future of Quebec wrestling,” predicted Skater. 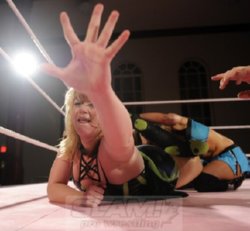 Hailey Hatred reaches for the ropes while tied up by Cheerleader Melissa.

“The Sin City Girl” Angie Skye was facing “Everybody’s Favourite Girlfriend” Jessie McKay. As with Kira, Skye well performed with one of the best indy female wrestler. The fans just loved McKay and cheered for her to win this one, which is what she ended up doing.

In the other matches, Cheerleader Melissa and Hailey Hatred had a 25-minute Japanese-tyle draw that fans were raving about after the show was finished; She Nay Nay defeated Femmes Fatales’ first European wrestler, Ireland’s Rhia O’Reilly; Sweet Cherrie beat Portia Perez in the opener; and Missy defeated Anna Minoushka, Milou and Mary Lee Rose in the pre-show match.

Building on the past shows, this eighth Femmes Fatales event really showcased the promotion’s young talent.

“The show was the most successful and best overall without a doubt,” said booker Stephane Bruyere through his Facebook page.

The next NCW Femmes Fatales gala will be on July 7 and besides the local and regular talent, the promotion already announced a tag match between Portia Perez and the returning Nicole Matthews, both dubbed as the Canadian Ninjaz against Sweet Cherrie and a partner of her choosing. Also, the talent exchange with New York’s WSU will begin with the Midwest Militia (Jessica Havok, Sassy Stephie and Allysin Kay) booked.