Finally … The Rock has come back to WWE DVD … with an excellent documentary that does put boots to asses.

That really sums up The Epic Journey of Dwayne “The Rock” Johnson DVD. For anyone who has bought past WWE DVDs starring The Rock, this latest release at long last provides a comprehensive two-hour documentary which includes a lengthy interview with The Rock that covers his career all the way up to his upcoming match against John Cena at Wrestlemania 28.

However, the documentary does have a degree of revisionism that I found surprising especially when you consider how brutally honest the recent Stone Cold Steve Austin DVD was. 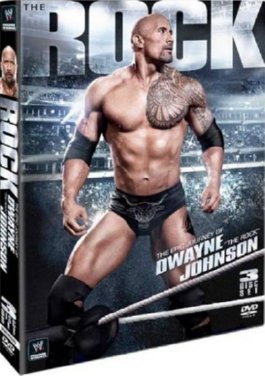 Yet, the documentary is still very high quality and there were some things that were included that surprised me especially in this PG-13 era of the WWE.

One that shocked me was a portion in the documentary that shows the competing promos from 2001 that Chris Jericho and The Rock did where they were hurling insults at Stephanie McMahon-Helmsley. While watching this section I wish an interview with Stephanie McMahon-Helmsley had been included to give a more balanced view of how she felt about the promos as they were pretty controversial at the time. If you have a younger viewer, you might want to skip over this section as some of the language involves some derogatory sexual terms.

If the DVD has any weak points it’s that there are only 10 matches included. (The Blu-Ray provides a bonus match which is the recent 2011 Survivor Series match where The Rock teamed up with John Cena to take on The Miz and R-Truth.)

However, the 10 matches are pretty strong choices, including the 1998 SummerSlam Ladder match against Triple H, the 1999 Royal Rumble I Quit match against Mankind, the 1999 Backlash match against Stone Cold Steve Austin, a 2000 Raw Match where The Rock teamed up with the Undertaker against Edge and Christian for the Tag-Team Championship, and the 2002 SummerSlam Undisputed WWE Title match against Brock Lesner. The 2003 No Way Out match against Hulk Hogan is also on the DVD, but I found myself wishing that the Wrestlemania 18 match was included too, because the No Way Out match felt like an incomplete story without it.

As for promos, the DVD only includes some of The Rock’s recent ones leading into Wrestlemania 27 and The Rock’s hosting duty at the PPV. The Blu-Ray version includes The Rock’s challenge to John Cena for Wrestlemania 28 and The Rock’s birthday celebration from the May 2, 2011 Raw, along with a couple of more topics that were not included in the documentary.

While the DVD doesn’t include any of The Rock’s promos from the earlier portion of his career in a separate section, many of them are featured in the documentary, which more them makes up for this oversight. Plus, for anyone who wants to watch many of the complete promos they are included on the 2008 WWE DVD release The Rock: The Most Electrifying Man in Sports Entertainment.

Of late whenever the WWE provides both a DVD and Blu-Ray version I’ve usually recommended the Blu-Ray. However, in this case, unless you really want to see The Rock’s 2011 Survivor Series match, I would recommend just picking up the DVD version.