Going behind the scenes on The Score’s Aftermath

The downtown Toronto studio is brightly lit, the crew is in place and the show’s director is sitting before a wall of monitors in the adjacent production room. 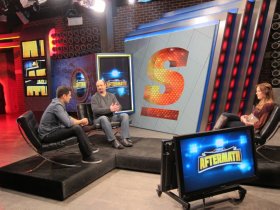 On the set of Aftermath on The Score. Photos by Colin Hunter.

But the stars of the show seem a bit — how to put this charitably? — unready.

Renee Paquette squeals as she yanks loose several strands of her hair that have become entangled in her necklace.

Arda Ocal is feverishly writing notes in blue marker on his left wrist, for reasons he insists will soon become clear.

Jimmy Korderas sits placidly, a bemused smile curling his lips. He’s the self-described “quiet one” — but then, most people would seem quiet when compared to his frenetically chatty co-hosts.

A voice in Paquette’s earpiece crackles “three minutes,” and she repeats it aloud to her co-hosts.

Because Raw ran well over its allotted two hours this week — The Rock was apparently on a roll — the post-Raw chat show, Aftermath, will be correspondingly brief. In theory, Aftermath is a half-hour show, but in practice its duration is entirely determined by the WWE show that precedes it.

“This is going to be the shortest Aftermath ever,” says Ocal. After a moment’s thought, he corrects himself: “Maybe second shortest.” 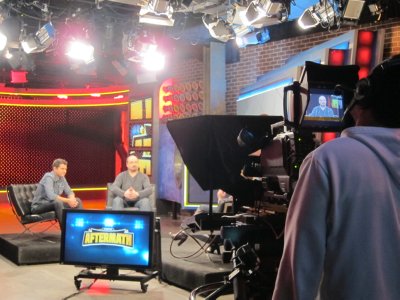 The camera-eye view of Aftermath.

It’s ironic — if Raw runs overtime, it’s probably because something particularly talk-worthy happened on it, but the Aftermath gang ends up with less time to talk. And that can make things rather tricky.

“It’s a lot harder to do a short show than a long one,” says Paquette. “It’s really important to pay attention to the pacing.”

The voice in her earpiece tells her there are two minutes until air. 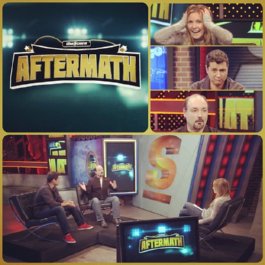 The pre-show uncertainty, the last-second revisions, the need for improv and ad-libbing — these are what make Aftermath fun, the hosts agree.

On Tuesdays, they broadcast the show live-to-air. Aftermath begins as soon as the Raw replay ends — usually 6 p.m. or shortly thereafter — and wraps up by 6:30 on the nose.

The version of Aftermath that airs on Friday nights after Smackdown is, on the other hand, “kayfabe live,” Ocal says. Wrestling fans, he adds, will decipher what that means.

On this particular Tuesday, the hosts have been forced to re-think their typical game plan, since they won’t have time to get into their usual routines (their “Wins and Fails” and the Doppelganger segment).

To appease the die-hard fans who would miss such features — and the show does have a lot of die-hard fans — the trio recorded a straight-to-YouTube webcast earlier in the afternoon, during which they picked their “Wins and Fails” for the week. 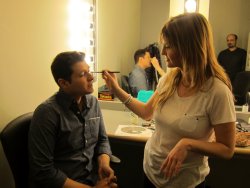 The toughest job in the business: Getting Arda Ocal camera-ready.

With about 90 seconds until airtime, Ocal checks to ensure all four legs of his chair are securely positioned on the raised platform. It has been a pre-show ritual ever since Korderas slid backwards off the platform — on live television, no less — because the legs of his low-slung leather chair were too close to the edge.

Korderas “no-sold” the chair snafu, carrying on with the broadcast as if nothing had happened. A veteran wrestling referee with more than 20 years of WWE experience to his credit, it seems Korderas knows how to roll with the punches during a live show.

He is a bottomless well of behind-the-scenes tales from his WWE days (he once absorbed a full-force chop to the chest from The Big Show during a wee-hours card game in a hotel lobby, which left him with a colossal welt and some serious cred).

Korderas is the most-recent addition to the Aftermath team, and provides the voice of experience that nicely counterbalances the youthful enthusiasm of his co-hosts.

“They can’t get rid of me now,” Korderas jokes. “I have squatter’s rights.”

Paquette has hosted the show since its inception two years ago, and is a kind of ringleader — she asks questions, keeps conversations on topic and, when necessary, shouts over her cronies when it’s time for a commercial break. Along with being quick-witted and comfortable on camera, she is also an attractive young female, which certainly doesn’t hurt when targeting a heavily male-skewed viewership.

Ocal is the resident superfan — a walking, talking (and talking some more) encyclopedia of professional wrestling wisdom, trivia and opinions. Paquette calls him the “Rain Man of wrestling,” and the nickname seems apt. His desk, in a typical office cubicle several floors above the studio, is covered with wrestling toys, memorabilia and kitsch. In the drawer is a scrapbook of wrestling-related newspaper clippings and autographs he has collected over the past 20 years or so. 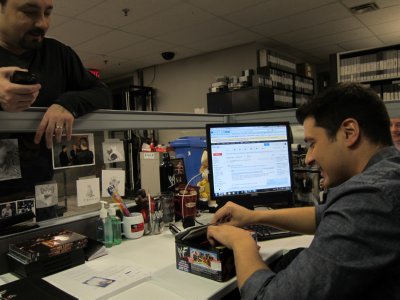 Arda Ocal, “Rain Man of wrestling,” looks to find out who Jim Londos is.

During a dull moment earlier in the afternoon — when he wasn’t tweeting, blogging or Facebook-chatting about wrestling — Ocal pulled out from under his desk a WWF Trivia Board Game from the 1990s, and easily answered obscure questions about the likes of Phineas Godwinn and Savio Vega. He happily confesses that being The Score’s resident wrestling Rain Main is his dream job.

“If I didn’t work here, I wouldn’t have a job,” laughs Ocal. “I’m unemployable!”

While that’s not exactly true (he has an impressive broadcasting resume and a degree in mathematics and business administration from the University of Waterloo) he wants to stay within the wrestling business — someday in WWE, he hopes.

The voice in Paquette’s earpiece gives her the 30-second warning. She sits up straighter and glances one more time at her typewritten notes. 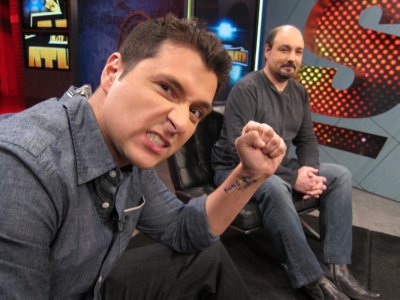 Just like The Rock, Arda Ocal uses his arm as a cheat sheet.

Ocal looks at the note he scrawled in marker on his wrist. It reads: “Kung Pao Turk.” It’s both a jab at The Rock, who noticeably had “Kung Pao Chicken” jokes jotted on his wrist during Raw, and a nod to Ocal’s Turkish heritage. It’s a sight gag, and Ocal is determined to use it during the show.

The producer counts down from 10 in Paquette’s ear.

Then the red light on the camera blinks to life, the trio does what seemingly comes natural to them. They smile, they banter, they bicker and they laugh about professional wrestling.

Paquette barely glances at her notes. There was a rough script for the episode, but the trio largely ignores it. The scribble on Ocal’s wrist is enough to spark several minutes of lively conversation.

When the show is over and the cameras are off just minutes later, Ocal explains that it’s much more fun to improvise on live television than to use a script.

And, unsurprisingly, he uses a wrestling metaphor to make his point: “We don’t script it — we call it in the ring.”

Colin Hunter, who wants a wrestling trivia rematch against Arda Ocal, is creator and writer of the satirical Kayfabe News (www.kayfabenews.com), and can be reached at [email protected].