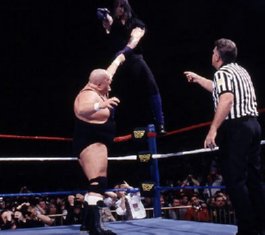 In what may have been the most star-studded WrestleMania of all time, the mere presence of The Undertaker once again perhaps stole the show, as he took down a man that took his name from a Hollywood classic. But this one didn’t take place at the top of the Empire State Building.

After spending years in the ring himself as a competitor, DiBiase was playing a role in this match which was unfamiliar to him. But he made it work, just as well as The Undertaker made his character work.

“As a manager, it’s a lot easier to work with the mechanics of the match. Timing is very important,” DiBiase said. “The role of the manager is to be the weasel; the mouthpiece. And you get to take the cheap shots. I got to play along with the mystique of The Undertaker. I was able to brag and boast, only to have it all blow up in my face.”

Bundy is a guy who would immediately capture attention anywhere he goes. He was a heavyset individual with one-piece ring attire and no hair on his head or face, which at one time included his eyebrows.

For almost 20 years, Bundy held the record for the shortest match in WrestleMania history, with a nine second victory over S.D. Jones at the inaugural WrestleMania.

The very next year, he main evented WrestleMania 2 in Los Angeles, against then-WWE Champion Hulk Hogan.

Bundy also tried his hand at film work, as he was cast in the Richard Pryor movie Moving, and also made guest appearances in the sitcom Married…with Children.

What may have been overlooked in the Bundy/Taker match was the special guest referee, Major League Baseball umpire Larry Young, who certainly had a blast, calling that match.

“I was assigned to that match by [WWE head office employee] JJ Dillon. I had worked a couple matches before that. One was in Times Square. I did a couple of tryout matches there, and then went on the road for a while,” Young said. “I may be a little different than most of the so-called celebrity participants. I don’t even consider myself a celebrity, but I had a real respect for the business. I think a lot of people were just there because of their status, but I really wanted to be there and be part of it.”

The Undertaker not only slammed Bundy at WrestleMania 11, but sealed the deal with a flying clothesline to make sure that Bundy rests in peace.

Wrestlemania 11 was Bundy’s first WrestleMania match in eight years, and surely he would have hoped for a different result. But as the famous saying goes, one man’s sunset is another man’s dawn. And The Undertaker continued his climb of success from that day forward.

“Taker’s one of a handful of guys, where even the casual fans will know who he is,” DiBiase said. “I don’t follow golf, but I know who Tiger Woods is. And The Undertaker is the same thing to wrestling. There are certain names in wrestling that people will always remember.”