Geneviève Bernier is similar to many young women. She dreams of traveling the world, would like to advance in her career and enjoys Japanese anime. Bernier is different in one aspect, she is a colourful professional wrestler named Kira.

Bernier got her start in pro wrestling through a family connection. 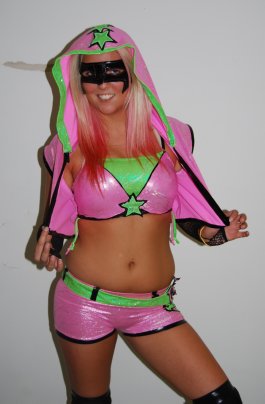 “My brother was a pro-wrestler,” Bernier told SLAM! Wrestling. “I started attending his shows when I was 15. I loved everything about pro wrestling and started training with a wrestling promotion based in Sherbrooke, Quebec.”

Bernier started training at 16 and was wrestling regularly by 18. Like most female wrestlers in Quebec, her path would eventually cross with Quebec wrestling female legend, LuFisto.

“I have taken a couple of wrestling courses from LuFisto,” remarked Bernier. “She is a role model in that she has wrestled around the world and is such a skilled competitor. I would love to have a career in wrestling like Lufisto.”

LuFisto only has positive words to say about her student. “Of all the people that attended my wrestling clinics, she was the most enthusiastic, getting up very early and driving for two to three hours to be on time,” said LuFisto. “When she shows up at an event, she is always excited and ready to give everything. She is one of the rookies that trains regularly to gain more knowledge and is always open to constructive criticism. She loves wrestling so much that I can see a bright future for her.”

When speaking with Bernier about wrestling, her passion for the sport is obvious. “I love the adrenalin rush from working at shows. It is great to meet my fellow wrestlers and interact with fans. I just love the entire spectacle.”

Dressed in her bright, neon outfits, Bernier is already well on her way to establishing a solid career. She wrestles on a regular basis and will be appearing on the upcoming Femmes Fatales show in Montreal on March 10, which also features Jazz, Mercedes Martinez and Cheerleader Melissa.

“The Femmes Fatales show features some of the top wrestlers from around the world,” said Bernier. “It is an honour to appear on the show. I will be wrestling Kellie Skater, who is from Australia. I love to face opponents from different parts of the world. You can learn from every opponent.” 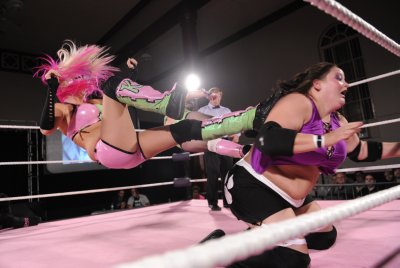 Although Bernier has only been wrestling professionally for about three years, she has already suffered some of the bumps and bruises of the profession. “I have water on both knees and have had a few other minor injuries. Luckily, I have not been seriously hurt. I was not really into sports before wrestling but my career in pro wrestling has certainly pushed me to gain a better level of fitness.”

She has some definite ideas where she would like to take her career. “I would love to wrestle in Japan. I love the culture and it would be a thrill to perform for the Japanese fans. Obviously, it is also the dream for most pro wrestlers to perform in the WWE.”

Bernier’s love of all things Japanese, especially manga’s Fushigi Yûgi by Yuu Watase, led to the development of her wrestling character. “I am really into Japanese anime. I work as a masked wrestler under the name, Kira. My character is a direct influence of Japanese anime comics and their characters.”