By now, the Ontario indy scene is very familiar with “Psycho” Mike Rollins. The next step for Rollins is his role as Master Murder in the Wrestling Retribution Project.

The brainchild of Hollywood screenwriter Jeff Katz, a longtime wrestling fan, Wrestling Retribution Project is a 13-episode wrestling program that taped its run in October and will be distributed through streaming media and DVD.

Oberegger’s trainer, former TNA star “Hot Shot” Johnny Devine thinks it will just be the start for his pupil. “The Wrestling Revolution Project [its former name] is just the first to pick Mike up. It won’t be long before you see Mike in a WWE or TNA ring full time. Although I hope he goes to Japan first,” said Devine. 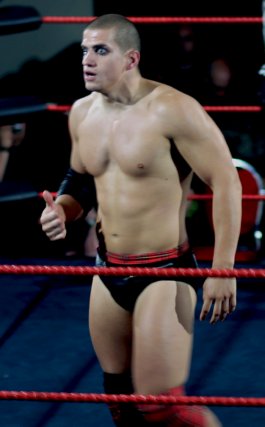 Despite his hype, reputation and monikers, Rollins stresses that wrestling is more real than most people think. Most wrestlers have to have three very important elements within them: desire, physical discipline and mental toughness before even stepping foot in the squared circle, because wrestling is anything but phony.

Rollins’ interest in wrestling started at an early age where he watched the business on television through elementary school and further on into high school.

“Most kids grew up liking sports like baseball, wanted to be baseball players, I grew up watching wrestling, so naturally I wanted to become a wrestler,” he told SLAM! Wrestling. He would attend Ontario shows as a fan, attracted by the lights and sounds as much as names as Christian, Robert Roode and Christopher Daniels.

He sought out Devine for training at Oakville, Ontario, boxing gym. The conditions were anything but glamorous. “Every bump was like a gunshot, simply because the ring had no give and no padding,” Rollins explained. The difficulties to working inside a boxing gym included low ceilings, loose ropes, and sharing the space with aspiring boxers. Highspots, like diving off the turnbuckles and running the ropes, were out of the question most of the time because of the conditions weren’t ideal.

Devine was strict about teaching his students to strike safely while making it believable at the same time. In terms of being mentally and physically tough, there were certain drills that were done in order to perfect such areas of work such as timing and strength.

For the 6-foot-2 Rollins, the drills were a physical torture at times, because the physical drills included 250 Hindu squats, 50 pushups, abdominal stretches. The workrate only increased when the boxers were in the gym that day. “Striking drills were most difficult because of the physical toll it took on your body. At the end of each lesson, my chest, back and forearms were the colour purple,” recalled Rollins.

Devine, who now lives in Calgary, is still a big fan of Rollins.

“Mike is one of the next bright stars in the wrestling business. filled with talent and more importantly a truckload of charisma, Mike is the rare guy who also is smart enough to know how to use it,” said the former TNA star. “When he first came to me to train he was … 180 pounds soaking wet. He became my dancing monkey and a source of both pride and entertainment. Mike was a sponge. He soaked up everything I and others would teach. Most importantly though, he took what he was taught, worked hard both in the ring and in the gym, and now the whole business is starting to take notice.”

Rollins recalled his first bout, against Carter Mason for Great Canadian Wrestling, on March 23, 2007, a part of a card headlined by Kamala. The match itself lasted all but a few minutes, and Rollins wore plain black tights with green gold boots. “I looked like a star,” he said sarcastically.

The transformation into “Psycho Mike” wasn’t quite as spectacular as one might expect. 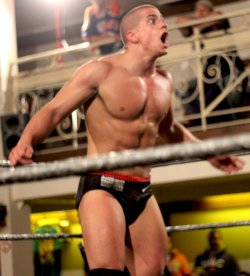 “My ring name was given to me by Big Daddy Donnie [Abreu]. He was a booker at the time for a small Toronto promotion. I was working with him for a while, one night a bar Big Donnie just kept repeating ‘Psycho Mike,’ for his own amusement. The next day I received a call from him about the name addition and I did not hesitate. I was on board 100% with the idea.”

Having adapted the name, Rollins said he is always thinking about how he can progress his persona and standing in wrestling. He is a man that thinks about the theory and tries to apply that theory to his ring work.

He is willing to do whatever it takes to get him over as long, as it is entertaining. “I think what makes what makes me stand out more than most is that I don’t try to be too serious as a wrestler to the point where it would hinder me, I just go out there with a one of kind of look and I give my best efforts in my characters performance and in ring work,” said Rollins, who also polished his skills under Scott D’Amore and Harley Race.

The 26-year-old Rollins is a valuable part of many promotions, including the Hamilton, Ontario-based Alpha-1, which has a local TV deal.

“Psycho Mike Rollins is 100% every single time. The fact is, if you bring him in for any show, he’s going to give you 100% in the ring, in his interviews, and in his interactions with the crowd, be it heel or face,” said Jeff Goodridge, who works with Alpha-1 as a commentator. “He can do funny and serious, he’s genuine, honest, straight forward, and that’s really all you can ask for in someone that you want to work for you.”

Away from the ring, Oberegger is a software developer.

He relishes the camaraderie with his fellow wrestlers while traveling on the road to the next show. “It’s much more cost effective to travel in groups, not only does it save money, but you can be entertained for hours,” he laughed.

Even if the Wrestling Retribution Project doesn’t shoot him to superstardom, as some expect, he can say he did work for WWE.

It was September 15, 2010. “I was wrestling Brodus Clay on WWE Superstars. Even though WWE is a promotion that is on a grander scale, I wasn’t nervous, because I looked at the match as being just that, just another match.”

It was the starpower that awed him.

“Brodus Clay and I were talking backstage after our match was finished and all the sudden Bret Hart and Triple H walk by us like it’s nothing,” he said, adding that a few, like The Miz, Goldust, Cody Rhodes, John Morrison, and Trish Stratus, all took the time to talk to him for no particular reason at all just to talk.

Perhaps they just weren’t aware that he was “Psycho.”

Anthony Sicilia is a journalism major at Conestoga College in Kitchener ON. Your comments and feedback are appreciated. Email him at [email protected]