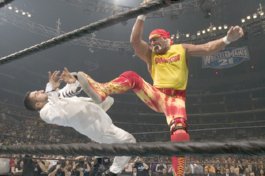 No. 27 – Hulk Hogan returns to WrestleMania

Hulk Hogan missed eight straight WrestleManias during his stint with World Championship Wrestling. He wrestled at WrestleMania 18 and WrestleMania 19, but suffered one of his many fallouts with Vince McMahon in 2003 and was not seen on WWE television until it was announced he’d be inducted into the WWE Hall of Fame with the Class of 2005, the night before WrestleMania 21.

As the headline inductee, the fans went wild and chanted for “one more match” for Hogan as he accepted his place in the Hall of Fame, but no Hogan appearances were officially announced, leaving many fans, especially those in Los Angeles, wanting more.

Fast forward to WrestleMania 21 itself. Eugene came out to speak to the crowd a little less than three months after suffering a knee injury on live pay-per-view at New Year’s Revolution. He didn’t have long to speak before Muhammad Hassan and Daivari came to the ring to berate Eugene and the fans, as he was in search of his own WrestleMania moment. Left off the card, he decided to take matters into his own hands, as he and Daivari beat up Eugene before Hassan put him in the Camel Clutch (and no, he didn’t break his back for the purposes of making him humble, either).

As the injured Eugene struggled in the hold, a familiar song blasted over the speakers.

And with that, the roof blew off of Staples Center as Hogan, dressed in his signature red and yellow, even had to stop momentarily on the ramp to acknowledge the raucous ovation, even from Adam Sandler.

Hogan hit the ring only to be immediately double-teamed. Of course, that didn’t last long, as Hogan grabbed both Hassan and Daivari and banged their heads together. Then he went to work on Hassan, working him over with punches, a corner clothesline and then his signature big boot before sending Hassan over the top rope.

As he looked over his handiwork, Daivari snuck up behind Hogan and belted him in the back with a steel chair. The shot did no harm to Hogan, as he quickly hit Daivari with the big boot and tossed him over the top.

Then Hogan posed down to all four sides of the ring, the fans loving every second of it.

Why it was important: The Hall of Fame and WrestleMania appearances jump-started Hogan’s 2005 WWE run, which featured two pay-per-view matches. He teamed with Shawn Michaels in his “one more match” to face Hassan and Daivari the following month at Backlash before Michaels turned on him in July leading to their famous one-on-one battle in the main event of SummerSlam.