One of the most memorable characters of the Al Tomko era of BCTV All-Star Wrestling passed away earlier this week. Sonny Meyers, known as “Madman” for his in and out of the ring antics in the 1980s, had been suffering from throat cancer for quite awhile, his longtime friend Ed “Moondog” Moretti said today.

“He was supposed to go to Dean Silverstone’s Washington reunion this summer, and the morning of it he had had treatments and chemo, and he was too weak and couldn’t go. He was sick for quite awhile; you know really, he smoked too much,” explained Moretti. 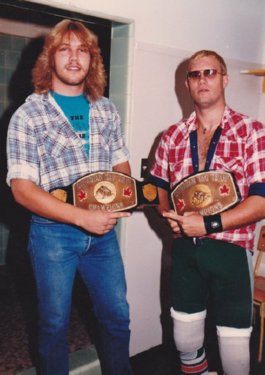 Myers had, with Verne Siebert, organized their own reunion for All-Star in 2003.

Moretti had known Robert Clinton Weathers — Myers’ real name — since he was 12 years old. Weathers was originally born in Hattiesburg, Mississippi. The duo were hardcore regulars at the Cow Palace spectaculars of Roy Shire in the Pat Patterson glory days before esssentially self-training and breaking into the wrestling game together in the San Francisco territory.

“Back in 1973 and ’74 the wrestler known [in B.C.] as Sonny Meyers and I were friends who had met at wrestling and both wanted to get in the business. Since we had nobody to train us, we basically trained ourselves,” said Moretti. “We had watched and attended wrestling so much that even though we had no idea what a lot of the ‘inside stuff’ was called, we could emulate what we saw and after much repetition, make what we saw look passable to the untrained eye. Side note here.– when we both did get in the business in 1978, most of the guys who saw us starting out said that we looked pretty polished for being guys just starting out. We always took much pride in that!”

Weathers and Moretti didn’t have access to a ring — but would later build one — so they improvised.

“We used to go to these tennis courts that were surrounded by a very taunt, very high cyclone fence,” laughed Moretti at the memories, “and we used the fence as ‘ropes’ to spring off of. We also figured that possibly the ring we’d eventually ‘get to work in’ would be hard so we needed to be use to it and not bump shy, so we trained ourselves to just take the bumps on the blacktop in the tennis courts. After a while, you get used to it and it doesn’t hurt anymore.”

Known in his home state as Bob Adonis, as well as Bob McFay and The Champion at various times, the young Weathers was athletic, including the then-popular rolller derby, but was considered too skinny according to the optics of the day. However he exhibited the qualities instilled by that training — take the hard slams and provide lots of action and the people will believe it is real — and took his act to the dying days of the Los Angeles booking office facing the likes of Texas Red (a masked Red Bastien) before coming to Canada and was rechristened Sonny Meyers, or Sonny Myers. (The Tomko rebranding would lead to continued confusion with the original Sonny Myers, a mainstay of the Kansas City area who once held a version of the world title in the late 1940s.)

Records indicate he beat Tomko to become NWA Canadian Heavyweight champion in Cloverdale on December 1, 1984 and formed a rock and roll tag team with promoter Tomko’s son Todd, a.k.a. Rick Davis, before turning villain and ending up in Jonathan “Fuzzy” Sayers’ stable with J.R. Bundy, Dirty Dan Denton, Playboy Doug McColl, Sir Joseph Cagle, Ivan Gorky, and a few others. They all achieved cult notoriety in Canada from the coast-to-coast syndicated telecasts.

Among his laurels were co-holder of the NWA Canadian Tag title with Mike Dupree and shortly thereafter with former foe Tim Patterson, just prior to Tomko breaking away and using the independant UWA sanctioning monicker. In 1985 and ’86 he feuded with Tomko, Gerry Morrow, and Rocky Dellaserra as he traveled the province. His last match on that run appears to have been October 1987, when Tomko made the disastrous decision to emphasize the women’s division. He tried a comeback match around 1997 but around six minutes in, broke his hip trying to relive his high-flying past.

One of the funniest stories involving Sonny and Al Tomko was told by Neil Drummond online a few years ago. “A John Tenta story which also has Red Mahoney in it.”

“Our TV Tapings were taped at BCTV Studios in Burnaby. There were about 4 or 5 dressing rooms in the studio so there was quite a bit of room. I won’t go into the whole story but Red had just returned from a trip to the states (like I said I won’t go into that part) and had some major heat with the boys especially Sonny Myers that night. They started scuffling in one of the TV dressing rooms with Sonny throwing punches. Red grabbed Sonny in a headlock and the two fell backwards and put a hole in the wall in one of the dressing rooms. This was not good as our BCTV tapings were our big promo for our promotion. Anyways, the scuffle ended with a BIG hole in the wall.

“The TV studio was upset with us over the damage to the wall. Al Tomko (like him or not) could be a genius at times. He told the studio that John Tenta leaned back in his chair and fell backwards with his elbow putting that hole into the wall. This got us out of hot water with the studio.

“This was not the end of the story because the TV’s sports announcer at the time, John MacHeachie, went on the 11:30 p.m. sports that night and on the air told the viewing audience what happened in the dressing room with Tenta putting a hold in the wall with his elbow. Incredibly funny !!”

Mike “J.R. Bundy” Phillips remembered Myers as “a classic man. He always treated me with the most respect, he didn’t really treat a lot of people with great respect but he was a great guy to me. In fact, he was at the root of the famous Terry Tomko line when Sonny told him what music he wanted played for his ring entrance, and Terry played his role and said, ‘I control the tapes, brother!'”

“He was like an artist in the ring, one hell of a worker. Al didn’t know what to do with him, he’d turn him heel and back and then heel again,” said Phillips. “Once Al switched to a girls promotion, I took off with Cagle for Nashville, and I never spoke with Sonny again. We’re getting to that age brother … it’s sad.”

An imitation of Sonny was a standard in the repertoire of many of his co-workers, from McColl to Denton to Diamond Timothy Flowers, they’d all recite in Myers’ unique voice him laying out a match punctuated by f-sharps and exclamations: “and I’ll take a biiiig f—in’ back drop Jack! and then …”

Weathers, who lived in Cheney, Washington, is survived by his wife, Cheryl.

The many stories of that ‘f—in’ madman’ Sonny Meyers