The Streak: Undertaker stomps a Snake

The result: Win over Jake “The Snake” Roberts; WrestleMania record, 2-0 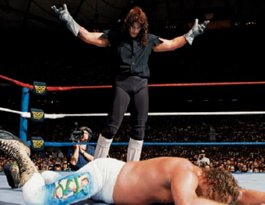 The Undertaker seeks powers from above while facing Jake “The Snake” Roberts.

Although the WrestleMania 8 card may have been changed, Jake “The Snake” Roberts’ facial expression always remained the same. But he may have met his match with The Undertaker.

Roberts was originally penciled in to square off against Randy “Macho Man” Savage, but as quickly as plans were made, plans went awry. He made quite the smooth transition though from one match to another, and both Roberts and Taker were able to work it out.

Roberts was well known for his soft-spoken, yet effective promos, in which he would often quote Bible verses.

He is the son of the late Grizzly Smith and the half-brother of both Sam Houston and former WWF Women’s Champion Rockin’ Robin.

Roberts was also a member of the original Legion of Doom in Georgia Championship Wrestling.

During his WWF days, he hosted a talk show segment called the Snake Pit, which never really took off, but he had classic rivalries with some of the WWF’s top stars such as Ricky Steamboat, Ted “The Million Dollar Man” DiBiase, Rick Rude, Andre the Giant and Randy Savage; all of which were very personal and therefore, much more exciting.

Most fans would associate him with his pet python Damien, who also played a significant role in those promos, coiling around Roberts’ neck as he spoke; Damien was often used to intimidate Roberts’ opponents. But Roberts always proved that the snake in the ring was just as cold as the snake in the bag.

Roberts later introduced a new snake (Lucifer), which was banned from ringside by WWF President Jack Tunney during the WrestleMania 8 encounter with The Undertaker, due to the graphic event that took place the previous year, where the king cobra sunk its teeth into the arm of Randy Savage, as Roberts looked on.

Had the snake been present for the WrestleMania 8 match, it might have been a different outcome, but nobody can say for sure.

Roberts tried everything in the match, including his signature DDT, but was unable to put the phenom away. He then made one mistake when he took his eye off the ball for a split second, and it led to him being Tombstoned on the concrete floor, moving The Undertaker up to 2-0.