Maryse happy to be moving on

When Maryse Ouellet went to the Bell Center in Montreal to watch a wrestling event for the first time in 2003, she instantly fell in love with professional wrestling.

She as in awe of Jeff Hardy; he captivated her attention and was the reason she started to watch wrestling more often. She even began hosting parties to watch pay-per-views at her house. 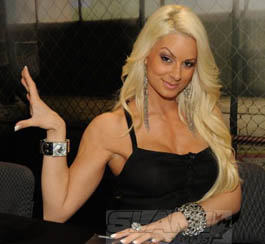 Maryse at WWE Fan Axxess at WrestleMania 27 in Atlanta. Photo by Mike Mastrandrea

“I just loved the way all those people would come out onto the stage and get in the ring,” Maryse told SLAM! Wrestling. “I loved the way they performed in front a live crowd.

“I told all my friends that one day I would become a Diva.”

Having applied for the WWE Diva Search in the summer of 2006, Maryse Ouellet’s dream of becoming a diva was at first a rocky road, as she was not able to speak more than 10 words in English.

“I flew to L.A. for three days. I will never forget my experience. I was so nervous; they made me do four auditions before choosing me for the TV show. I remember The Miz being one of the Diva search judges and he asked me to cut a promo on stage in front of everybody.

“He saw I couldn’t speak the language, and then asked me to cut a promo in French. To this day, they say I had by far the best promo of all the 10,000 girls that tried out and that if I could have cut a promo in English the way I did in French, it would be absolutely amazing.”

Maryse was eliminated in only the second round of the Diva search competition. However, WWE saw that she was very charismatic and felt she could become a big star. She was offered a contract and started training at WWE’s then-developmental territory Ohio Valley Wrestling.

It wasn’t long before Maryse debuted on the main WWE roster with a snobby heel persona and in the process became one of the fastest rising stars, claiming her first Divas Championship in December 2008.

Maryse enjoyed playing her character and says winning the Divas Championship is one of the most memorable moments of her career.

“I was so happy winning that title. I will never forget that moment I won the belt. As it was a big accomplishment for me.

“After only six months of competing in the women’s division, I was the champion. I was the first Diva to have won the championship twice and I hold the longest reign with 216 days, so I’m proud of that.

“The persona I played was 100% my creation. I told WWE Creative that I wanted to be a heel. I was always a babyface in developmental, but I’m a great actress.

“I can make you believe whatever I want you to believe, that’s what I told them when pitching the character, I loved my heel persona.”

It was just last year that “The French Canadian beauty” was seen managing Ted DiBiase Jr., while she was open to the idea of being a valet, Maryse realizes that plans can change at the drop of a hat in WWE.

“I liked the idea when they pitched it to me. I’m always open to new ideas; however we’re not in an era of managers. Like 10 years ago, things have changed a lot; we were given little so we tried to do our best with what they give us. 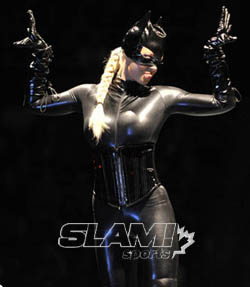 Maryse all dressed up for a Halloween in Montreal in October 2010. Photo by Minas Panagiotakis, www.photography514.com

“You never really know with the WWE. Everything can change, and change the very last minute, I wish they would have given us [herself and Dibiase] more. I believe we could have made it to WrestleMania that year.”

While the two were together as a partnership for over six months, WWE didn’t do much with them and subsequently the relationship ended in early 2011. It was on October 28th whilst recovering from surgery for an abdominal hernia that Maryse received her release from WWE.

When asked about leaving WWE, Maryse was extremely happy and looking forward to the future stating that she has been looking to leave the wrestling business for a while.

“I just want better and bigger and I want to be performing on the big screen, I am working on a big project called House Of Maryse, which will be launching in summer 2012. It will be my clothing and jewelery selection and will be available in more than 500 stores in the U.S. and online at www.houseofmaryse.com.”

“I knew in my heart that I wanted to leave WWE for a long time. I’m a business woman. I need to build and grow and I didn’t have any interest in the WWE anymore. I was like, next!

“My manager was happy when he heard of my release. He said to me, ‘Now we can start working on the serious stuff.’ I’m ready for a new chapter in my life. I have been with the WWE for six fantastic years, but now I want to do more.

“I would go back to WWE, for a million dollars and a main event match at Wrestlemania. But, no TNA.”