Trish Stratus may be retired from wrestling, but that doesn’t mean she’s at home resting. On the contrary, the seven-time WWE Women’s Champion is nearly as busy as ever. Her most recent venture is the launch of her new Stratusphere Yoga DVD, the launch party for which was held this past Saturday at her Stratusphere Yoga studio.

The DVD, which is available nationwide at retail stores like Sears, GNC Nutrition stores, London Drugs, the Stratusphere studio, or online at Stratusphere’s website, is intended for everyone from yoga beginners to experts. 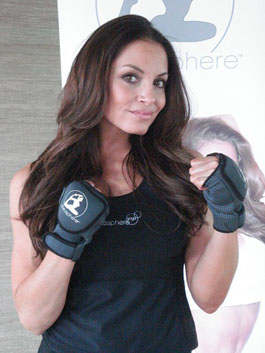 Trish Stratus at Saturday’s launch of her new DVD. Photos by Bob Kapur.

“It’s so versatile, because yoga is your own practice,” she explained during an exclusive interview with SLAM! Wrestling. “These are moves that you can adapt at your own level. You never have to do the full extension, you don’t have to do all the moves in a sequence. You just do what your body lets you do. The more you listen to your body, you’ll find that one day you’re doing a certain amount, and the next day you’re doing more. When you start to have the body awareness and your breathing gets tapped into, that’s when you can really progress your practice. That’s the cool thing about yoga, it’s an ever-changing practice.”

The DVD is a natural extension to the Stratusphere brand, and a great way, she said, to help spread the message to people who don’t have access to her studio.

“We’ve been open for nearly four years now. This is the headquarters, this is my home. I’m asked all the time to open other studios by people outside the greater Toronto area, but honestly I don’t know if franchising is the answer. I think that I do reach so many people in other ways, through doing lots of appearances and meeting people at speaking events, that I can touch peoples’ lives in that way. I think maybe that’s the best way to spread the message. I’m not sure. But now, people can do Stratusphere Yoga at home with the DVD, so hopefully that will help.”

For Stratus, the ability to see people transform their lives through yoga, as she did — yoga was instrumental in her recovery from a herniated disc in 2005 without having to undergo surgery — was a prime motivator behind creating the DVD, and she’s proud to be able to help people achieve their goals by using her tools.

“It’s quite exciting,” she beamed. “We see people transform, and not just physically. Of course, you see people losing weight and getting more fit. But there’s also a shift in peoples’ way of doing life. It’s really cool to watch peoples’ approach to life change. My students and instructors had so much to do with the video. If you think about it, the past three years have been a testing ground to watch people, to get feedback on what works for people. I had the opportunity to create unique programs, and that’s how I came about doing this one.”

It’s similar to how she has been able to help the players of the Toronto Maple Leafs and Toronto Argonauts, and even the prospects on WWE’s reality show Tough Enough where she was a coach.

“I warned everyone,” she laughed, “and told them that, ‘Just so you know, what made me a better performer was my yoga, so I’m going to be bringing yoga to the show.’ The kids loved it. It was neat to see a bunch of kids who wanted to be fighters embracing the integration of yoga into it. When I told them how it helped me as a performer and as an athlete, it really opened their eyes to it — and a lot of them are still doing it.”

She welcomes the chance to do another season, if the opportunity presented itself. At this point, there have only been discussions about doing another one, but with the new WWE Network debuting next year, she is hopeful that it will return, and she with it.

“Being a coach on Tough Enough was a perfect role for me to come back in. It fit perfectly with my schedule, too — we were out filming in California for about two months. It was perfect and to parlay some of the knowledge and experience that I’d gained over the years and help these young kids who are pursuing their dreams, it was really cool.”

Stratus, herself, got to pursue a dream recently, that of starring in a movie. The film, entitled Bounty Hungers (a change from the original name of Bail Enforcers) is planned for wide release in February.

“It was amazing,” she said about the experience. “I really enjoyed it. I was able to do my own fight scenes and learn a new fighting art, which really appealed to me to accept the role.” 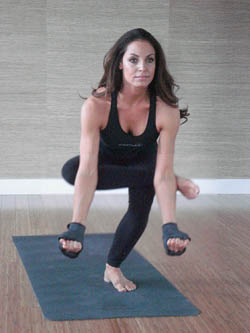 She did admit that the filming experience did take some getting used to, though, especially at the beginning. Particularly the lack of immediate feedback that a wrestling crowd provides.

“At first, I would think, ‘Hey, what’s going on? I did good, and nobody’s cheering.’ But then you get the wonderful moment of sitting in a theatre and seeing yourself on the big screen, and everyone starts cheering, that’s really cool. And to see myself fighting with sound effects — I’ve seen myself fight for ten years — but with the addition of sound effects, wow that takes it to a whole new level.”

She’s hopeful that her fans will support her in that initiative, just as they’ve done for all of her others.”

“My fans have been so amazingly supportive. I realize this when I come here to my launch party and it’s full of people and support. I’ve been out of wrestling for several years now, so to see that they still come to support me, I really appreciate that. And even on Twitter, I see people saying that they did their Stratusphere Living workout, so it’s neat to see that you’re spreading a message, and it’s sticking, and everyone is going to live healthier lifestyles. Every single venture that I’ve done, they’ve been there with me, and that means so much to me.”