Dick Huffman’s name comes up in Angelo Mosca’s new book, as they were both a part of the same 1987 induction class in the Canadian Football Hall of Fame. But “King Kong” makes no mention of “The Bull’s” wrestling career. And, given that Huffman’s Winnipeg Blue Bombers play in the Grey Cup Sunday, it’s time to revisit him. 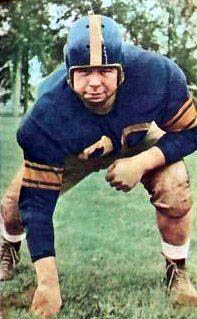 Huffman actually retired from the CFL the year before Mosca started, so he can be forgiven for the oversight in his great book.

On and off the field, Huffman, who played for the Winnipeg Blue Bombers and Calgary Stampeders, was one of the most important players in CFL history.

On the field, the 260-pound, six-foot-2-1/2-inch tackle played offence and defense. His CFL Hall of Fame bio reports that he “was a splendid two-way tackle who was known for his tremendous strength and agility. In his final season Huffman was selected to the all-star team as both an offensive and defensive tackle. Sports reports suggested that “enemy quarterbacks simply ran their plays away from Dick Huffman.”

“He was one of the outstanding tackles of the Western League,” said Al Oeming, the former Edmonton wrestling promoter from 1948-1959. “The one guy you could always find in the opposing side’s backfield was Huffman. He could break through any line. Big and strong, but very nice, very meek, very mild actually.”

Huffman was born March 27, 1923 in Charleston, West Virginia. At the University of Tennessee in 1942, he played right tackle, but then served with the U.S. Marines from 1943 to 1947. Back at Tennessee for the 1946 season, he was an All-American as the Volunteers won the SEC Championship with a 9-2 record.

In the 1945 draft, Huffman was chosen by Cleveland Browns, and then traded to the Los Angeles Rams, where he played from 1947-1950

In 1951, Huffman jumped from the National Football League’s Los Angeles Rams to the Bombers. It was a stunning move for such a promising youngster, who had been the Los Angeles Times Player of the Year in 1949, and played on the Rams team that lost the NFL championship to Cleveland Browns in 1950. 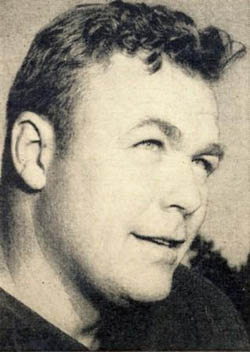 In May 1987, Scott Taylor of the Winnipeg Free Press sought out Huffman upon the announcement of his CFL Hall of Fame induction. He queried The Bull over why he switched leagues.

“I got a call from George Trafton, the head coach there up in Winnipeg,” Huffman said. “George had been my line coach with the Rams, so when he found out I was having trouble with the option year of my contract in L.A. he called. I said I’d gladly go play for him.”

The Rams, led by President Dan Reeves, took the Blue Bombers of the Western Canada Conference and Huffman to court to prevent him from playing up north. Huffman was forced to sit out half of the 1951 season before the suit was resolved; he ended up playing seven games. The Rams coach, Joe Stydahar, actually stood up in the Charleston, W.Va., court and, under oath, said he considered Huffman to be the finest lineman in the game.

“It was the first time the option year of a contract had come into anything,” Huffman said in 1985, just before the Bombers inducted him into its Blue Bombers’ Hall of Fame. “Nobody knew what was in the fine print of the contract.”

Stydahar believed that Huffman would stay in L.A. “Huffman can make more money here playing football and wrestling than any other place in the world. Johnny Doyle, the head man of the grappling game on the Pacific Coast, is ready to do a lot of business with Dick and I think the picture is a little different to him than it was when he visited Winnipeg last weekend,” the Rams coach said.

“He’s our property and I think he will see the light and return with us without any court proceedings,” Stydahar said at another point. “I’m looking forward to a visit from Dick in the near future and I believe he will renew his contract with us.”

The Rams traded his rights to the San Francisco 49ers, and the Niners offered him the same money as the Bombers, but couldn’t match the extra dough that Canada Packers promised Huffman outside of his contract.

When he finally got out onto the CFL field, Huffman proved his old coach right. His speed and strength were legendary.

“One game I saw him pick up two guys, one in his left hand and one in his right, and throw them aside,” Bud Korchak, a teammate, told Dave Supleve of the Free Press. “He was the greatest lineman I ever saw.” 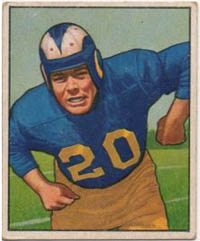 A 1950 Bowman #53 Dick Huffman football card, when he was with the Los Angeles Rams.

“He could cover sideline to sideline,” said Ed Kotowich, another teammate. “He was as quick as a halfback. He could run down a lot of backs in 10 or 20 yards. I don’t know if the guy ever got mean on a football field. If he had the temper of a Buddy Tinsley he might have ripped people apart. I always had the impression that if Dick was pushed he could have been twice as good as he was. He used to operate at his own speed.”

The Bombers traded Huffman to the Stampeders before the 1956 season, in exchange for placekicker Tom Miner. Huffman played two more seasons, leaving pro football after 11 seasons, but had already started wrestling professionally in late 1955.

“I thought he could do well,” said Oeming of Huffman’s prospects as a wrestler. “He was a powerful hulk of a man, and well-known, because he was a well-feared linesman.”

“In deciding on wrestling as a future career it is to be expected that Huffman will come under the teaching guidance of Whipper Watson, who spent several months preparing Gil Mains and Doug Hepburn for the ring before they made their debuts,” wrote Globe & Mail sports editor Jim Vipond, acknowledging that Huffman had already wrestled professionally a little in the early 1950s in California.

Tunney credited another Toronto institution for Huffman’s progress. “He’s been working out with Pat Flanagan, one of the best fellows in the business. That has meant a lot for Huffman.”

So while his actual debut was in Los Angeles on March 6, 1951, Huffman returned to the squared circle in Toronto in February 1956. He proceeded to travel the Canadian circuit, hitting the towns especially where football mattered.

Before a June 1956 bout in Saskatoon, he called out Hard-Boiled Haggerty for past transgressions. “If you want to know who was the dirtiest tackle I ever played against in football, just look in the other dressing room. That Haggerty was with Green Bay Packers when I was breaking into the U.S. pro league and he played it rough. He knocked out three of my teeth in our first meeting. Maybe I’ll get a crack at him in the wrestling ring some day.”

Sports editors found his dual line of work appealing to write about, even if he never really took off with fans and was mainly used in opening matches.

“The secret behind the big man’s amazing agility is that he works at conditioning the year round. In the off-season he’s a pro wrestler and big drawing card in Western Canada rings,” profiled Andy O’Brien in the Ottawa Citizen‘s Weekend section.

He retired from football officially in February 1958, though the Sarnia Golden Bears tried to get him to be a player/coach, but he told Regina promoter George Jacobs that “he intended to remain in the mat game on a full-time scale.”

Records of his matches after football, however, are few and far between.

After wrestling and football, Huffman retired to West Virginia.

“Didn’t do a damn thing for three years, just went hunting and fishing,” said Huffman in 1987. “Then I opened a few beer joints, a gas station and a restaurant.” He was also a well-known unofficial policeman around Charleston, keeping things under control on weekends when the party crowd came to town.

During his last few years, Huffman suffered from diabetes, and had his big toe and a segment of his right foot amputated. He died on September 13, 1992 at the age of 69.