Being a TNA Knockout means everything to Gail Kim

It’s been a strange couple of months for current TNA Knockouts Champion Gail Kim. Back in August the Canadian-born grappler controversially went against instructions and eliminated herself from the Divas Battle Royal match on the August 1st episode of Monday Night Raw. A few days later Kim announced on Twitter that she had quit WWE, however, she was not permitted to leave. 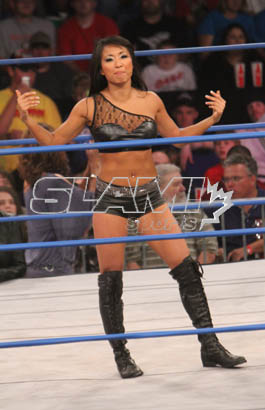 The confidence of Gail Kim has returned in TNA. Photo by George Tahinos.

What followed was a stunning standoff between WWE and their former Women’s Champion, which saw her forced to sit out the remainder of her contract. Kim’s decision to eliminate herself caused quite a bit of controversy, with some figures in the wrestling world who called her actions unprofessional, although Kim stands by the decision she made.

“I don’t regret what I did at all. It was a respect thing,” Kim told SLAM! Wrestling, when explaining her decision to eject herself from the Battle Royal. “I was told to get eliminated as soon as possible, so that’s what I did. I saw my decision as a case of either continuing to take their lack of respect or doing something about it.

“Nobody knows what I went through in terms of disrespect during my time there, but that move wasn’t just about me it was a culmination of all the disrespect I felt that all the other women and the women’s division as a whole had received too, I was taking a stand.

“While a lot of fans watching Raw noticed what I did, nobody from WWE noticed, that just shows how much they didn’t care. I went up to Johnny [John Laurinaitis] after and spoke about the Battle Royal and his reaction towards the match was, ‘Yeah, I heard it was pretty shit.’ I was amazed and I then told him how I eliminated myself and he just laughed.

“How can fans take the division seriously if the people working for the company aren’t? If it had been one of the men who had eliminated themselves they would have been punished, but because it was the women nobody cared, not even after I had told them.” 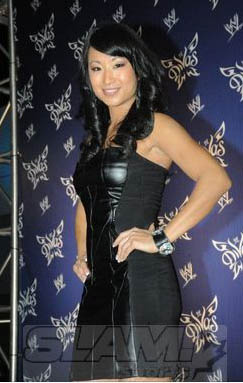 Gail Kim strikes a pose at WWE Axxess at WrestleMania 27 in Atlanta. Photo by Mike Mastrandrea

The decision to eliminate herself from the Battle Royal would be her last appearance on WWE TV, but while Kim wanted to leave the company, WWE refused to let her. Kim saw WWE’s decision to make her wait out the last few months of her contract as a control tactic.

“WWE are notoriously known for being controlling when it comes to your career, that night of the Battle Royal I went to Johnny and told him I quit, I said I don’t want your money; I just want to be free. He told me that it shouldn’t be a problem, but of course it was.

“They didn’t want me to work elsewhere, at this time I told him, ‘What does it matter if I leave or not? You’re not using me, it’s not like I’m valuable to you just let me go,’ but there was no budging.”

It was this lack of respect from WWE which Kim found disheartening during her time there, especially considering that while a member of WWE’s rivals TNA, Kim was a pioneer in helping to build their growing Knockouts women’s division, which has since gained a solid reputation.

After sitting at home for over three months waiting out the remainder of her contract, Kim finally made her long-awaited return to TNA on the October 20th edition of Impact Wrestling, when she created shockwaves by aligning herself with Madison Rayne and Karen Jarrett. 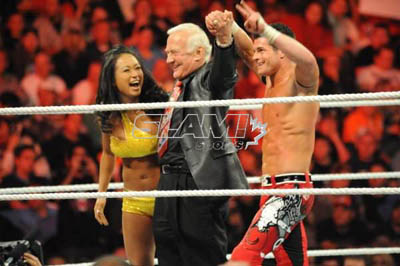 This alliance would mark the first time in over six years that Kim has been a heel, having spent most of her professional career as a babyface. It is a switch that she welcomes with open arms.

“The decision for me to become a heel I really liked, I felt it was a nice progression to do that again. I love what I’m doing now, I love working with Karen and Madison. They are very talented, I think Karen is on another level in terms of being a heel, with someone that beautiful it’s usually very hard for them to get heat but she does it well.

“There are so many more talented girls in the division now, the division is stronger, plus the fact that there are more women here now makes it a lot better.”

Kim couldn’t wait to start back with TNA and reunite with old friends like Traci Brooks and Christy Hemme, two women which also aided in the growth of the Knockouts division since its inception.

“I’m just so excited to be back in the company, I can’t speak for anybody in particular but the feeling I got when I came back was that there were no hard feelings about my previous decision to leave. Being back here feels like time has never passed.

“I think everyone kind of expected me to return. I said in my last interview when I was leaving that I would probably be back, everyone has been real welcoming, it’s like being a part of a family here at TNA. It’s great to see the growth that this company has made since I’ve been gone, it’s nice to see the direction its going and where they want to be heading.

“There are areas they have improved upon like the fact that they’re starting to tour more now which is something they weren’t doing as much back when I was here before, they have come on in terms of production and the overall talent here is much better now.

“There’s such a great group of women wrestlers now as well, they’ve all got some character development and all have their own roles within the division, which is good to see.

“I’m just so happy to be here and to now be a part of a company once again that actually cares about wrestling.”