Mark “Bison” Smith, a regular for Japan’s NOAH promotion and known in North American for his 2009 run in Ring of Honor, died Tuesday of a heart attack in San Juan, Puerto Rico. He was 38 years old.

Growing up in Denver, Colorado, he got into weightlifting at age 13, which helped with his amateur wrestling and football. 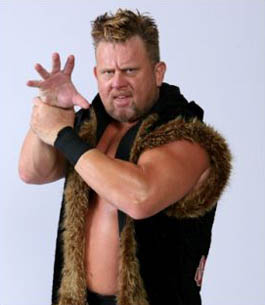 “I worked out at Gold’s Gym. I loved lifting weights more than I did playing football or amateur wrestling. Some kids played video games some rode dirt bikes but I loved to hang out at Gold’s Gym,” Smith said in an interview with Afro Squad Army. At the gym, he noticed some wrestlers and began to consider that as a career.

An offensive lineman on a University of Colorado football squad, Smith met Leon White — Vader — who had played for the team in the 1970s and rekindled his interest in pro wrestling.

After moving furniture for a few years after his senior year at university, Smith moved to California and hooked up with the All Pro Wrestling promotion run by Roland Alexander, with trainers Donovan Morgan and Mike Modest. Though he debuted in 1998, it wasn’t until 2001, when he got to Japan in July that he began to get noticed. Puerto Rico followed thereafter.

With his hair cut into a wide Mohawk and his 6-foot-3, 280-pound hulking frame, Smith won titles in the IWA in Puerto Rico and the Global Honored Crowned tag belts in NOAH on two occasions (with Akitoshi Saito in 2008, and Keith Walker in 2010).

In North America, his most notable run came in Ring of Honor, where he a member of Prince Nana’s group, The Embassy, and feuded with Bryan Danielson (now Daniel Bryan in WWE) through 2009.

Montreal’s El Generico told getting to know Smith at a Ring of Honor show, and subsequent trip in the car to New York City. “He also told us about how being such a big guy, young hotheaded guys would constantly try to step up to him at bars to prove themselves. Despite the fact that he was so large and intimidating, and could probably pulverize them with little effort, he was not confrontational at all and would often just reply with a genuine and bewildered, ‘Hey man, what’s your problem?’ Those words really made me laugh,” he wrote here.

“Over the last 5 years he’d become like a brother. He was a big scary lookin guy w/ a heart of gold,” wrote Chris Hero on Twitter.