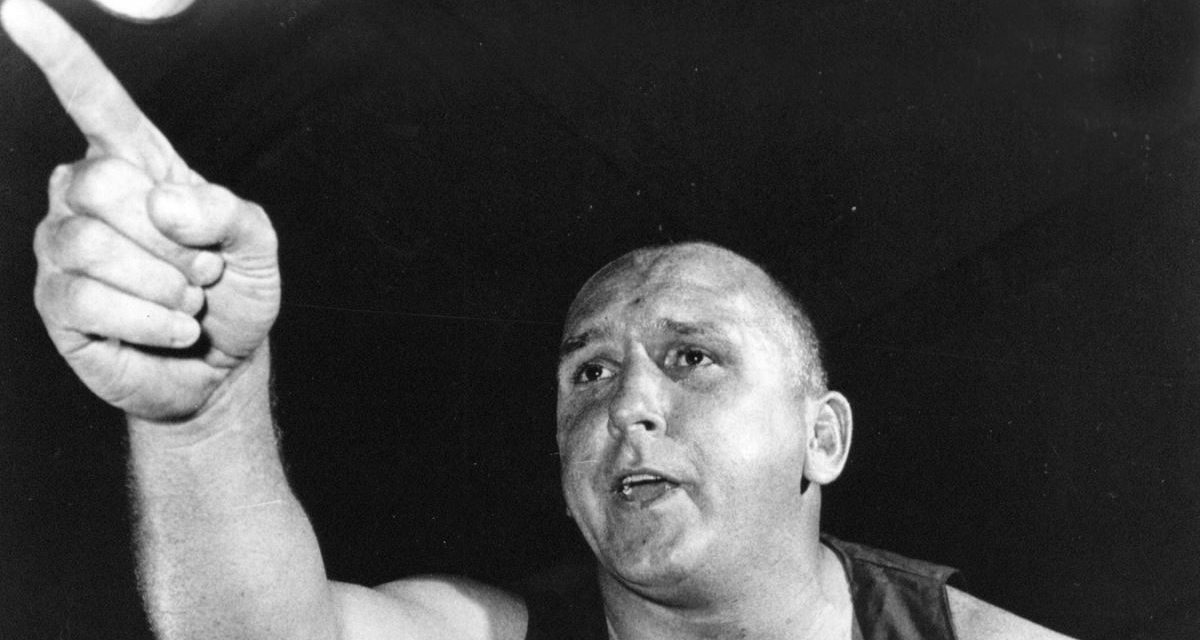 Killer Karl Kox, who died November 10, 2011, was a funny son-of-a-gun, but fans would never have known that given his wild, violent personality in the ring. When called upon his 80th birthday in May, he shrugged off the best wishes. “I don’t need any more!” KKK yelled. “I’m not drinking any more, so what else are you going to do on your birthday besides drink?” 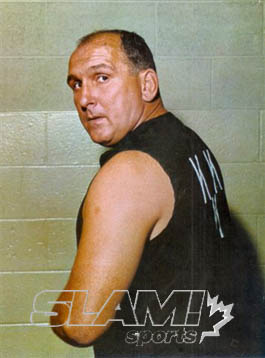 He knew his health was going, but wasn’t fatalistic about things.

At that point, he mentioned that his legs were getting bad. “I’m starting to walk like Harley Race, hunched up like a monkey on a football,” he explained.

Kox, whose real name was Herb Gerwig, suffered a massive heart attack back on October 22nd, then had a stroke a few days later.

“My dad didn’t want a funeral, but we might have some sort of memorial for him within a few weeks. Once that is decided, I will let everyone know,” said his son, Cody Gerwig, on Facebook.

But knowing KKK, he wouldn’t want anyone to dwell on the negatives, like dying and all.

He was all about living, and he loved to tell tall tales about ribs on the road.

There was the time Johnny Valentine put firecrackers in somebody’s pocket, and lit them. “The guy had passed out on the bench sleeping,” Kox shared. “Goddamn, the guy jumped up, smoking like a barbecued beef.”

And Kox was never hesitant to speak his mind, or worse, as happened to Bill Watts.

“[Dick] Murdoch and I drew, like, 43,000 people to the SuperDome in New Orleans, and I hate to tell you what he gave me for a payoff,” KKK said of Watts, the promoter for the Mid-South territory. “He took me up to his house, and showed me his brand new house. I walked out there to the diving board and pissed in his pool. ‘What are you doing that for?’ ‘I built this damn pool!'”

Did Watts know about it?

“Sure he saw me do it! I nearly fell in I laughed so hard.”

The late Billy Red Lyons was on the receiving end of many a fist from Killer Karl Kox in the ring, but expressed his appreciation for him. “He was a good guy. He couldn’t have been a babyface if he wanted to. He was funny, just a great guy,” Lyons said. “He’d do something in the ring, and you’d just laugh at it because he was so funny.”

The Destroyer (Dick Beyer) traveled with him in Japan and remembered how Kox played games in lounges with a glass marble that looked like an eye. “All of a sudden, he’d take this marble and he’d drop it into his beer. Then he’d close his eye up tight and he’d call the waitress over. He says, ‘My eye!’ He looked up and she looked down at the beer and they’d pick up the beer, pour it out, and give him the glass eye back and then he’d make believe he was putting the eye back by covering it up. We did this every night, in every bar we went into.”

Kox attended the 2010 Cauliflower Alley Club reunion in Las Vegas, and Terry Funk shared a story about him at the banquet. 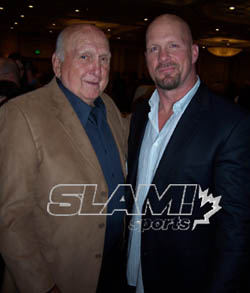 One of Karl Kox’s tricks was he’d be riding in a van with Murdoch and see a hitchhiker on the side of the ring, a little scrawny guy, began Funk. “He’d pull on the side of the road, pull up past him, stop. Karl Kox would go ahead and he’d go out there and he’d make a kung fu fighter out of anybody. He’d get out of that truck, he’d throw open the doors, go back there and look at the guy and say, ‘I’m going to kick your ass. I’m going to beat the hell out of you.’ And then he’d go ahead and get closer and closer and closer to the guy and that little 140-pounder would be there and here comes big Kox getting and closer and closer. And all of a sudden Kox would stop: ‘Hey, you don’t know karate, do ya?’ And the guy’d go, ‘Yeah, hiyah, hah, yah, eeyah!’ and Kox would turn around go ahead and jump back into the van and off we’d go.”

It’s a funny story, sure, but it’s the opposite of Killer Karl Kox in the ring.

When he was at his peak in the 1960s and 1970s, nobody, but nobody, messed around with Karl Kox. A lot of villains would try to get a rise of out a crowd, then tone down things just a tad to keep fans from rioting. Not Kox. “Nah, I toned it up. It’s just the way I was,” he said.

“There was nobody tougher than Killer Karl Kox,” marveled Don “Lawman” Slatton in The Pro Wrestling Hall of Fame: The Heels, who promoted Abilene, Texas, and wrestled him regularly. “The son of a gun could go. To get a crowd roused up, there was nobody in his class. He just looked like he didn’t like you. He was something else.”

Herb Gerwig was born in 1931 in Baltimore, and his father worked at the paper for 52 years. He attended Forest Park High School. From there, at age 19, it was on to the Marine Corps during the Korean War, something he rarely talked about said former World Class announcer Bill Mercer, one of his closest friends.

“Karl was in the group of Marines that was caught up at the Chosin Reservoir and fought their way out. He’s never told anybody what happened,” said Mercer, who had KKK on camera years later for a documentary about Korea. “We were talking about getting his reaction to that. At one point, he just had to stop and quit because he was choked up so bad. To see a big, tough wrestler like that. But he did tell us, ‘I just got tired of picking frozen bodies up and putting them on the front of the jeep.’ He had it tough.” 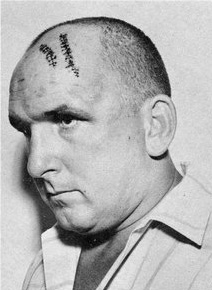 KKK shows off some scars.

After the war, Gerwig went to Cleveland for a construction job, and he moonlighted as a high-level softball player. An old wrestler named Gentleman Fred Bozak found him and tossed him into the ring at 23. “They threw me in with some old guy I didn’t know. He bent me like a pretzel.” As turned out, he had just met Ruffy Silverstein, a Hall of Fame amateur and one of the greats of his day. But during his apprenticeship, Gerwig also watched and learned from wrestlers like the Gallagher Brothers, who mixed violence and comedy in their matches, a formula he’d use wisely.

Gerwig wrestled for six years in places like Buffalo, Pittsburgh, and Cleveland, before The Sheik hooked him up with Omaha, Neb., promoter Joe Dusek in 1961. There, Dusek switched his name to Killer Carl Cox. “I didn’t have the background and the knowledge to be a babyface. I played semi-pro football and ice hockey as a heel. It was easy for me. It just came natural.” When he headed to the Amarillo, Texas, territory, he switched to Killer Karl Kox — KKK — and the racial overtone was none too subtle.

“He had the greatest gimmick ever. KKK — he didn’t have to say a word,” Ernie Ladd said once.

Kox earned a lot of his infamy overseas, with nine trips to Japan and five to Australia.

The promoter in Australia, Jim Barnett, called him and Kox agreed to the deal. “So he put out the publicity that I’d be there on a certain date on TV in Mebourne and Sydney and he got so many calls about what was going to happen to me if I came over there, he eventually called me, I was living in Amarillo Texas at the time. ‘Karl, my boy, I think you’d better cancel out because you have so many threats on your life that I think it wouldn’t be worth your while.’ I said, ‘Hell no I’m coming anyhow.’ We drew a helluva lot of money.”

His biggest runs in North America were in Texas, Oklahoma and Florida, though you’d be hard-pressed to find a territory he didn’t work, even just for a while. It was in Florida where he dabbled on the side of good.

“He was a helluva babyface too. He managed me for a while when I did the Marine thing and all that. Even then, he had the psychology enough to be a good babyface as well as a good heel,” said Jimmy Garvin.

Jack Brisco raved about KKK in his autobiography. “Killer Karl Kox was likely the best heel I had ever seen. If you want to know how Killer worked in the ring, just take a look at Stone Cold Steve Austin. The attitude, the movements in the ring — seeing Steve is like traveling back to my early days in Texas,” wrote Brisco.

It was KKK that popularized the inverted suplex. “I called it the brain buster. A lot of places tried to outlaw it and everything, but the fans, jeez, ‘You’re going to kill somebody with that, you’re going to break somebody’s neck!’ Little did they know that I knew what I was doing.”

After he quit the ring, Kox put his talents to use keeping an eye on jail prisoners for the sheriff’s department in Dallas. “I used to tell them, ‘You know why I’m wearing white and you’re wearing blue? Because they haven’t caught me yet.’ Oh, they liked that.”