The Honky Tonk Man, with his long sideburns and his hair slicked back, was one of the biggest and most recognizable stars of the WWF back in the 1980s. Over recent years the greatest Intercontinental Champion of all time has also become known for his shoot interviews. Most likely this is the reason why he returned to Kayfabe Commentaries to record another YouShoot.

Honky’s first YouShoot release four years prior was quite interesting, with no subject left uncovered and therefore it was interesting coming into this release, whether the sequel would match the high expectations set by the first. 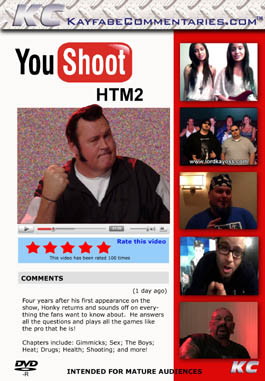 It doesn’t disappoint. This installment is very entertaining. Kayfabe Commentaries owner Sean Oliver and his team have found a lovely niche with this series, which in essence is an up-to-date version of a traditional Q&A session. Oliver and his team have also discovered a very unique way of getting their subjects to express their feelings and stories on individuals by introducing games such as the “Mugshot game” and “What’s in the bag?”

To be honest though, I did find this title quite long, at 150 minutes it can quite a little bit tedious, but that’s where the games that Oliver plays with his interviews come in; they give a sense of relief from the standard Q&A scenario which even though has been jazzed up by the added bonus of technology, can still become a little wearing in places.

Honky doesn’t hold back on any question that was posed by fans, constantly giving honest and open answers, it has to be said however that Honky dials down the verbal venom showed in his first YouShoot entry — which it has to be said is a little bit of a shame.

The great thing about this sequel is that it touches on subjects that the first release didn’t. There seems to be a lot that Honky has an opinion on, and it’s nice that he got another chance to express his opinions.

Honky also put over a few people he worked with whilst on the other hand, slating a few others as well. The really interesting part, though, was the question put to him about putting younger talent over on the independent circuit. His continued refusal to do this, saying he doesn’t want to damage his career, really speaks volumes about his opinions. When he talks about protecting his career and image, he comes across as slightly insecure, and someone who forgets about people who put him over and helped make him during the formative years of his career.

Regardless of this, Honky does come across as a likeable and personable chap most of the time. The one thing that is attractive about the YouShoot series, is because questions are posed by the fans, it gives the titles a real sense that you can’t miss one entry and that you never quite know what is going to happen next. This is something that’s very rarely seen in wrestling video titles.

Overall, this is a really good release, and it’s nice to see Kayfabe Commentaries going back to doing what they do best after the disappointing wrestling’s Most Controversial Moment release recently. This is the sort of thing that Oliver and his crew should continue to do, thumbs up from me.