Gail Kim is no stranger to championship matches. The former TNA Knockout and WWE Women’s Champion has seemingly done it all in the top two promotions in North America, recently adding the TNA Knockouts Tag Team Championships to her list of accomplishments. 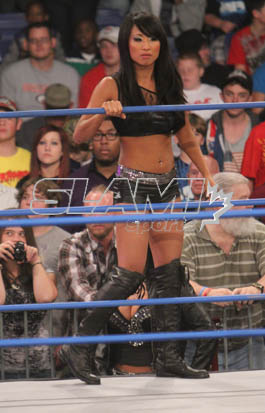 This Sunday at TNA Turning Point, Kim steps into the ring for her first pay-per-view outing since re-joining the group in October, against current TNA Knockout Champion Velvet Sky for a title which Kim considers the most important belt she has ever won.

“Myself and every Knockout in the company at the beginning worked so hard to build up a credible women’s division in TNA so finally holding the title meant so much to me.

“Winning the Knockouts Championship I can say is a moment I will always remember for the rest of my life and I would like to relive that experience by winning the title again this Sunday, knowing I have gained more experience and have learnt so much more.”

Making her re-debut with the company on the October 20th edition of Impact Wrestling, Kim brutally attacked Sky, thus aligning herself with Madison Rayne and Karen Jarrett. Since then the three women along with their lackey Traci Brooks have seemingly dominated the Knockouts division with Rayne and Kim gaining the tag team titles on November 3rd’s edition of Impact Wrestling. With Rayne and the vice-president of the Knockouts division by her side, Kim feels confident of once again claiming the Knockouts Championship but realizes that Velvet Sky has improved in the time she has been away.

“Velvet Sky and I haven’t faced in over three years; she has come on leaps and bounds, so I’m interested to see what skills she now possesses, but I am very confident in the ring and very confident heading into Turning Point. She has improved a lot since I’ve been gone, but I’ve improved too.

“Well done to her for finally winning the Knockouts Championship, but she did do that while I was gone. Now she has real competition to beat. With Karen and Madison in my corner of course I am confident — but I would be confident and ready for this match anyway, having these two women back me up are just added bonuses.

“The three of us are a dominant force there’s no doubt about that. Having Karen on our side is a massive plus, she’s already got me a Knockouts title match and helped me and Rayne win the tag titles so it’s already showing that our group is working.” 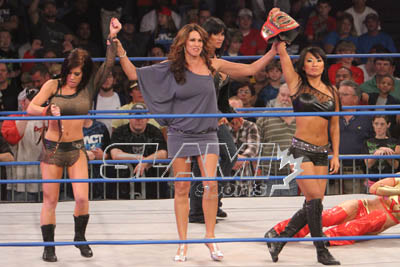 Winning the Knockouts tag team championships is something that Kim is extremely proud of and she believes it shows how much the division has grown and how much TNA as a company value women wrestling compared to other promotions.

“Having tag titles within this division shows that TNA take us more seriously than others. We have enough women in the division to make it work and it’s a great advertisement for women’s wrestling as a whole. I definitely think myself and Rayne can hold our titles for a long time, she is a very talented girl and I enjoy teaming with her.

“It’s an honour for me to be holding these belts, I’ve never held them before and I want to explore more in the tag team division and I think me and Rayne can light the tag team scene up.

“There are so many different combinations of girls that we can go up against that it’s really exciting, there’s so many good matches we could have.”

Before leaving TNA in 2008, Kim was a true pioneer of the Knockouts division, her matches with Kia Stevens (Awesome Kong) were truly groundbreaking and while her time in WWE was less than enjoyable, Kim looks forward to meeting new challenges, tearing the house down in TNA’s Knockouts division and she believes this starts on Sunday against Sky.

“Fans are going to see a great wrestling match at Turning Point. She may have more moves in her arsenal since the last time I met her, but I’m very confident in my abilities and I think I’m quicker and smarter than her and that I will prevail.

“I know that she’s learnt a lot and that we’ll have a great match and show the fans something special. I have no doubt they’re going to witness one step closer the dominance of myself, Karen and Madison in the Knockouts division.

“We’ve already got the tag titles in our possession and there’s only one more belt to go and that’s Velvet Sky’s Knockouts title which is coming home to me on Sunday.”