Daniels’ chemistry with Styles will shine at Bound For Glory

In wrestling, it is not uncommon to find that a wrestler’s career is not defined by his or her own abilities, but by the feud, often longstanding, with another performer. Indeed, finding that signature feud and carrying it out over the course of a long career can make a wrestler a legend in the business.

Take, as a case study, Christopher Daniels. “The Fallen Angel” has long been regarded as one of the best technical wrestlers in the industry in a career that has included memorable runs in Ring of Honor and TNA. 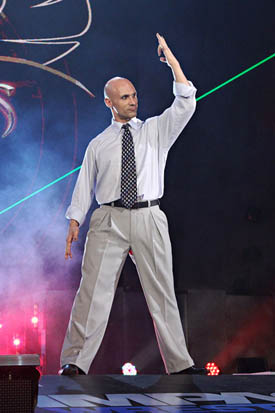 This Sunday at Bound for Glory, Daniels has once again found one of his favourite dance partners in A.J. Styles, as they face off in an “I Quit” Match. The two have had memorable bouts that have dotted the landscape of pro wrestling, including a recent series of bouts that have served to remind fans just how good their in-ring chemistry is.

Even Daniels himself looks back favourably on this feud, reflecting on the battles they, and another RoH’er turned TNA star have had.

“I absolutely think that AJ will be the opponent I’m most associated with, along with Samoa Joe,” Daniels told SLAM! Wrestling. “The history between the three of us will probably always be the feud most often credited with putting TNA on the map. I think the thing that makes the matches between AJ and I special (along with Joe, of course) is just the drive to make every match different and special in some way, shape or form.”

As noted, Daniels and AJ have recently found themselves embroiled in a new series of matches that have run over the last couple TNA PPVs and on Impact broadcasts. Now, they face off on TNA’s grandest stage.

Daniels sees Bound For Glory as an opportunity to raise the intensity in the new run with AJ. “I always look at our pay-per-views as an opportunity to perform at a higher level, and with Bound For Glory being our signature yearly event, there’s more pressure to excel than most other pay-per-views,” Daniels said. “However, working with AJ at this point in my career is a special opportunity for the both of us to add to the history we’ve already created with our long-running rivalry.” 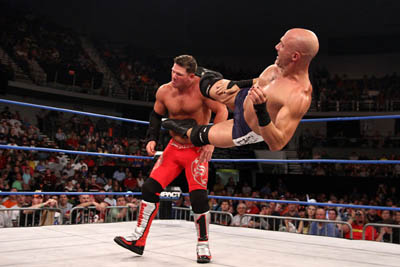 Christopher Daniels battling with — who else? — AJ Styles.

The bout, however, doesn’t take place where so many other TNA matches between the two have been staged, i.e. the Impact Zone in Florida. This time, however, they are headed to Philadelphia, known not only as a wrestling hotbed, but for having one of the most dedicated, if vicious fanbases.

Of course, Philly is well remembered for being the home base for ECW, while Ring of Honor, where AJ and Daniels both grew into the stars they are today, also has deep roots in the Northeastern U.S. region. Some fans have, thus, defined the city as being “ECW country” or “RoH country”; Daniels, however, doesn’t quite see it that way.

“I don’t look at the Philly crowd to be more of an ECW or an RoH crowd, simply because they’re a wrestling crowd, first and foremost, which is why those companies had such success in the market,” he explained.