Jacques Rougeau, Jr. has been busy setting up shows for his promotion and working on a co-autobiography with his father, Jacques Rougeau, Sr. What he has not been planning is a return to action in the ring. 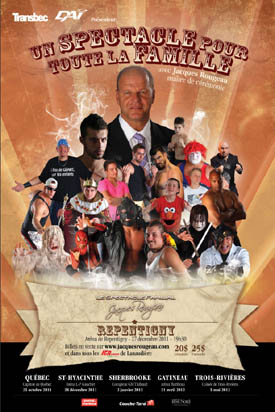 A poster for the upcoming show in Repentigny on December 27, 2011.

On his upcoming six shows under the Le Spectacle Familial Jacques Rougeau banner, Rougeau will be acting as the master of ceremonies, introducing his wrestlers.

He swears that his retirement from the ring is permanent, though, given that the fourth generation of Rougeaus — Jean-Jacques, 21 years old, Cédric (18) and Émile (11) — will be working on the show, he will admit that there “may be a small little interference” in one of his kids’ matches.

“I’m not planning any return. I’m just going to give a pop to the people that are there,” Rougeau told SLAM! Wrestling.

Rougeau is excited to have a big sponsor behind him, Transbec, and six upcoming shows booked, mostly in new markets for his promotion, populated primarily by students from his wrestling school.

“I’m so busy it’s not funny. I’m doing conferences in schools. I’m just preparing my shows; it’s so big this year. I’ve got so many new things, new promotion, like the big signs by the highways, the billboards,” he said.

The next show is October 25 in Quebec City, followed by his traditional holiday galas, Repentigny on December 27, St-Hyacinthe on December 28, and Sherbrooke January 2, 2012. In the spring, it’s Gatineau on April 21 and Trois-Rivières on May 5.

“It’s really taking a bigger step this year,” said Rougeau, explaining that the mayor in each city has already promised to be involved in the family-friendly shows.

“I even talk about the nude beaches in Australia when I went with the WWF — my first trip, I end up on a nude beach! And the stupid things we did, me and Raymond,” Rougeau chuckled. “It’s more a big on me in wrestling, what I’ve seen, accomplished and done, what I’m going, and my father, what he’s seen, what he did and what he accomplished. I’m the author of the book, I’m even writing my father’s side.” 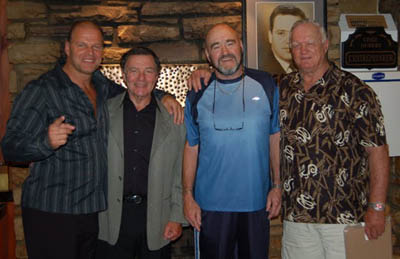 The brother of Quebec wrestling legend Johnny Rougeau, Jacques Rougeau, Sr. had a stellar career in his own right, and saw three of his sons, Raymond, Jacques and Armand, become professional wrestlers, and his daughter, Joanne, become the WWF promoter in Quebec for a spell.

“My dad’s talking about the years from the ’50s up to 1975. I’m taking 1975 up until now. It’s going to be a fun book, but it’s not really on wrestling, it’s about what we lived — what I lived and what my dad lived. It’s an opinion seen from us,” said Jacques Jr. The book is almost done, he confirmed, and he is hoping it might even see bookshelves by Christmas, in French and then in English.

“Of course, I’ll be talking about my story with the Bulldogs (The Dynamite Kid and Davey Boy Smith), but that’s normal, and a couple of encounters I had with Ludvig Borga, and a couple of guys down the road, the Steiners in Europe, and Shawn Michaels in Europe. Shit happens. I’m trying to show the people, ‘Hey, it’s not that fun on the road.’ It can be fun, but not that fun; the traveling, the life we had, it’s not as glamorous as it seems on the outside, and that the WWF was a jungle. There were different characters, different attitudes, you had to deal with that and you always had to be at the top of your game to try and stay respected, and respect everybody. I’m showing them the real side of how I dealt through my career, how it was.”