You won’t be seeing Tara around Philadelphia this weekend for Bound For Glory. The TNA Knockout and half of the women’s championship tag team won’t be at the Fan Fest or at the pay-per-view itself.

She wishes it were otherwise. 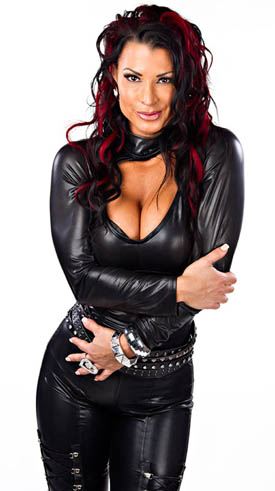 “It’s the biggest event of the year, and I’ll be honest, I’m not used to not being a participant or at least at Fan Fest. But it is going to be a good show and I wish I was on the card,” Tara (Lisa Marie Varon) admitted to SLAM! Wrestling Thursday. “I know I’m disappointing a lot of fans who are not getting their Tara fix.”

The featured women’s bout is a Four-Way match for the TNA Women’s Knockout Championship, with the champion, Winter, defending against Velvet Sky, Mickie James and Madison Rayne. Tara hemmed and hawed when pressed to pick a winner, before settling on Velvet Sky or Mickie James. “I’m hoping they’re prepping the person who wins to face me!”

Tara won the Knockouts tag titles with Brooke Tessmacher (Brooke Adams) at the taping of the July 21 edition of Impact Wrestling, an interesting pairing of veteran and rookie.

“She is green,” confessed Tara. “I get along with her and we became really good friends. I think they saw that and said, ‘We want to use her more on TV. What better way than to team her with somebody who can teach her a little bit.’ I think it backfired on them, because we’re both a little crazy. When there are people talking to us, it’s hard for us to not goof off and be loud. I think we both have good chemistry with each other. We’re good friends, so it’s nice to work with somebody you like.” 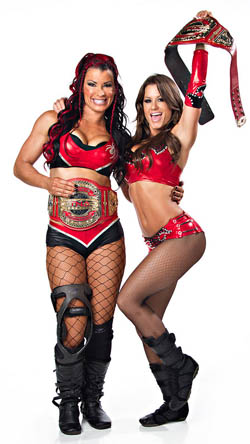 Tessmacher isn’t on the Bound For Glory card either. “I think they’re deep down afraid to face Brooke and I, because we have some stuff up our sleeve,” joked Tara.

Behind the scenes, TNA Impact Wrestling has seen Bruce Prichard assume more power in recent days, something Tara only just found out. “I just read it on the stooge sites,” she said.

“I know him very well. I get along with both Vince Russo and Bruce. I’ll be honest, it doesn’t really matter. I just hope Bruce uses me more. I’ve worked in the last couple of months twice on TV,” said Tara. “I hope Brooke Tessmacher and myself, we’re tag champs, we won these to defend them, not to be jewelry, not like our earrings, you know what I mean? Not to look good, we want to defend them and wrestle. We thought it would get us more wrestling opportunities. I’m hoping that Bruce considers that.”