Roode looking to make most of big opportunity

For years, Bobby Roode has plied his trade inside the TNA ring as a tag team wrestler. Now, when he faces Kurt Angle on Sunday for the TNA World Heavyweight Championship at Bound For Glory, he’ll get the chance to prove himself as more than just a “tag team guy.”

“I think people have just seen me as a tag team guy basically for my entire career and I’ve proven myself there with Beer Money and Team Canada, so this is my opportunity now to show the wrestling world what I’m made of as a singles competitor,” Roode told SLAM! Wrestling last week. 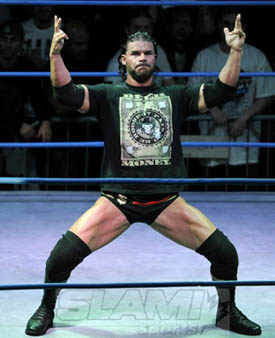 “I always knew I had it in me. Whenever I was given the opportunity to wrestle singles, I’ve always gone out there and, I believe, had good matches and I think I could have good matches with anybody, whether it be an X Division guy, a heavyweight guy or whatever it may be. They’re giving me the ball. They’re putting the attention on me, so it’s my job right now to take that ball and run with it and that’s what I’m planning on doing.”

Roode’s journey through TNA has been an interesting one. He started out as part of Scott D’Amore’s “Team Canada” stable in 2004, twice winning the NWA World Tag Team Championship with Eric Young. After the stable was disbanded, Roode went on to become Robert Roode and was given a singles run. However, that didn’t work out and Roode was paired with another wrestler in the same position he was: James Storm.

When TNA paired Roode and Storm together, they were given the seemingly standard reason why two wrestlers are paired together: Creative has nothing for you.

“They gave us a bit of a slap in the face when they put us together because basically their excuse was they didn’t have anything for us creatively,” Roode said. “The tag team thing was to last a month, maybe two months, and we just said, ‘Screw it, let’s make this the best thing we can make it’ and we did that. Here we are, four years later as one of the greatest tag teams in the history of the industry and we take great pride in that.”

Many could’ve taken a bad attitude after being taken from singles action and put into a seemingly makeshift tag team. Not Roode. As Beer Money, Storm and Roode have combined to capture the TNA World Tag Team Championship four times and had some of the best tag team matches in company history in a series with the Motor City Machine Guns last year.

“I don’t think I would’ve approached it any other way,” he said. “They gave us something and we could’ve either let it fizzle away and go through the motions, or we could’ve turned it into something great. James and I had a great work ethic, we were both hungry and we were a little pissed off and we wanted to prove them wrong and we did that.”

His tag team success allowed Roode to be part of the company’s Bound For Glory Series, in which the winner would receive a shot at the World Heavyweight Championship at Bound For Glory. Roode came out on top of the three-month long series after defeating both Gunner and Bully Ray at No Surrender last month.

“I think now, I think I’ve proven myself,” Roode said. “I think the powers-that-be, you could say, have seen something in me, and have given me the chance to go out there and kind of do my own thing and be my own person and have matches, give me time to have matches and kind of evolve that way. I’m not going to let them do what they did last time. When they give me the ball, I’m going to run with it.”

Roode is brimming with confidence not only from his recent successes, but because people in the company are getting behind him. On the Sept. 29 edition of Impact Wrestling, Roode was called to the ring by Sting, who talked him up and told him his time is now.

“That was definitely something special, the things he said to me,” Roode said. “I didn’t know what he was going to say to me. I had no idea what he was going to say or do. This has been a hell of a ride the last five weeks. Everybody’s pulling for me. I have family and friends, the entire city where I live, is pulling for me, and it’s just a huge buzz.”

There buzz is huge, especially considering Roode has gone from a wrestler that creative had nothing for to challenging for the company’s top prize on the biggest show of the year. Not only that, but his match is scheduled to main event a show that also features two wrestlers he admired growing up: Hulk Hogan and Sting.

“It’s amazing,” Roode said. “If you think of where I came from, being such a huge Hulk Hogan fan as a child and then headlining a show on pay-per-view with those two guys on it, is something special. It’s one of those things where you look at your career, where you’ve been, where you’ve come through and this is just such a huge night overall.”