Edge goes old-school: judging essay contest like the one that started his career

Twenty years ago, Adam Copeland, better known to wrestling fans as Edge, took his first step towards becoming a legend. By winning a newspaper contest, Edge won free training from a local wrestling school, which started him down the path to greatness. Now, Edge is partnering with Toronto’s Squared Circle Training to offer someone else a similar opportunity.

Edge is going to pick the winner of the “Edge-ucational Scholarship”, a contest being held by Squared Circle Training in honour of its 10th anniversary. To enter, aspiring wrestlers need to send an e-mail essay explaining why they have what it takes to become a professional wrestler. From all of the entries, which must be e-mailed to Squared Circle by August 31st, the ten best will be sent to Edge who will select the winner, and personally award them the prize at a special event to be held in September.

As Edge explained to SLAM! Wrestling in an exclusive interview, proper training is essential for anyone who hopes to have a successful career in the business. 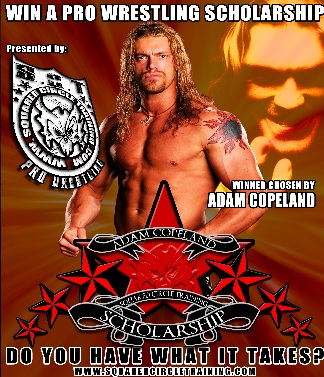 “If you truly believe that wrestling is the career you want to follow, then, like any other career, choosing the right school is paramount. (You need to have) the fundamentals. You need to know how to lock up, grab a headlock, switch to a hammerlock. And you’d be surprised the amount of footwork that involves, let alone what your upper body has to do. It gets complicated, and can be mind scrambling. A school and the teachers need to know the basics and have the patience to teach them.”

To that point, he believes that the trainers at SCT, including his friend, head trainer Rob (El Fuego) Etchevarria, have got the necessary know-how, the experience, and the credibility to teach not only the in-ring basics, but can also provide valuable lessons about the other aspects of life as a pro wrestler.

” The great thing about Squared Circle is that Rob was there with me every step of the way and encountered all of the tough stuff you run into at the beginning. (When I was training), I was young and hungry. Thankfully, my trainers Ron Hutchison and Sweet Daddy Siki knew I wasn`t ready for it. They also knew that their name was attached to me — if I went out and shit the bed, it would have looked bad on their training. I was taught patience. I was taught what to expect about wrestling… and starving. They told me the trials I’d encounter, and they were right! That`s what good training can provide.

Of course, there are other things that the winner must realize, he warns. While the training might provide many of the building blocks, there is no substitute for life experience. In picking a winner, Edge is going to be looking for someone in whom he sees the potential to make this a life’s work, as it was for him. That includes the ability to learn and grow both as a wrestler and as a person.

“The school gives you the foundation, what you put around it is up to you. And let’s face it, that’s just called becoming an adult, but it all factors in. Get a good accountant, good financial advisor, if you can’t pay for (something in) cash, don’t buy it. These were all things I discovered, but really can’t be told in a wrestling school.”

Beyond that, Edge has some tips for what else he will be looking for in the winner.

“I don’t expect you to know how to wrestle,” he said. “You shouldn’t know how, you’re not expected to. If you’re already trying to wrestle, Rob will just have to re-teach you the proper way anyway. I guess what it boils down to is passion and charisma without cockiness. I really want to see (who) the person (is. I’m looking for someone who (has) passion and who wants it for the right reasons.”

No doubt he’ll be looking to see someone who expressed the same level of passion as he did in his essay, all those years ago. A level of passion that he says would have driven him to wrestle, even if he had not have won the contest.

” I would have earned my way into Sully’s Gym eventually. It just would have taken longer to scrounge the money together. But I loved it, so money was not going to stop me — it would just have been a slight bend in the road.”

Which shouldn’t be misinterpreted as meaning that winning wasn’t a life-changer.

” Starting when I did because of the contest put me on a fast track to WWE. I was able to start training at 17, was signed by the time I was 23, and I was considered a veteran by the time I was 27. That’s rare nowadays. It definitely sped along my process, and I’ll always be thankful to Ron, Siki, the Toronto Star , and hell even Norm DeCosta (the Star columnist that ran the contest) for that! ”

And he’s happy to help someone else get the same opportunity through his involvement in the contest. Now, a few months into his retirement from in-ring action, Edge is looking at other ways to contribute to the business, and feels that this is a good fit in that regard. Is that something he would consider doing full time, perhaps within WWE`s developmental system?

“I think helping groom talent would be fun. But,” he considered, “I don’t know how great I would be about it at the beginner level. Rob has that skill. Lance Storm (who runs a training school in Calgary) has that skill. It’s an amazing skill, but I don’t know if I have it. (What I might be able to do is) look at someone’s intangibles and possibly make them better. So, I might be able to sit a kid down who’s been working 5 years, and say ‘if you implemented this idea, with your style, it will help kick the door open to a new level.’ ”

In terms of advice for the winner of the Edge-ucational Scholarship, he offers this last piece of advice: be yourself.

“Don’t try to emulate my career. Do your own thing. If you truly want to carve out a niche, you’ve got to figure out how to do it your way. Take advice? Of course. I took pointers from some of the best ever. But I had to take that advice and those ideas and make it my own. I looked up to the style of Bret Hart and Shawn Michaels, but there was already a Bret and Shawn, and nobody was going to do them better than them — so I had to make my own path.”

Of course, that path had to be forged one step at a time. Winning the competition, like Edge did all those years ago, is the first. And the second?

“Looking at getting (your) next booking. In the beginning, that should be the main priority after proper training.”