Going into professional wrestling at 5’6″ and 175 pounds, Buddy Wayne didn’t bother to set any goals for himself; it was all about getting to the next step. More than 25 years later, Wayne has traveled the continent, worked for the biggest promotions in North America, runs his own wrestling school, and has enjoyed every minute of the journey. 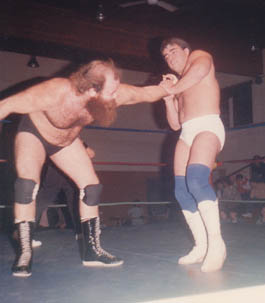 “I just wanted to survive training and when I did and got my first match, I then hoped for a second one,” Wayne told SLAM! Wrestling. “There were no contracts or developmental groups. After the first TV I did for Al Tomko [and All-Star Wrestling in B.C.] I thought if it ended right then it was more than I could have asked for. As time went on I just wanted to get better and see where this could go.

“I knew my spot in wrestling. I knew that if they asked you back, you had done a good job.”

Wayne, 44, grew up in Washington State, where he had access to two hours of weekly wrestling: All-Star and Don Owen’s Pacific Northwest Wrestling, based out of Portland. When visiting family in Texas, he got a glimpse of all the territories the south had to offer and he was bitten by the wrestling bug.

“I look back and realize how lucky I was,” said Wayne. “I broke in right after WrestleMania I, as the WWF was starting to take over. I was 17 and thought it was going to be great for everyone. I had no clue how the business really worked and five years later, the territories were gone.”

After only three matches, Wayne (real name Steve Finley) was contacted by Tomko to work for All-Star. Before he was able to crack the wrestling roster, Wayne paid his dues as a referee and ring crew member, training with All-Star’s veterans before shows, whenever they’d give in to his begging to be taught.

“I learned from some of the best,” said Wayne. “Oly Olsen, who took me to Oregon with Scott Ferris and Richie Magnett, to train, was a training and diet genius. Richie Magnett took me under his wing from day one and got me going in the right direction in this business and life. He’s still my best friend to this day. Traveling with and learning from Buddy Rose, who I idolized for years before breaking in, and Ed Wiskoski [was a highlight]. Working with Harley Race and Dynamite Kid in the summer of ’89 and meeting Rip Rogers in 1988.

“After every show for four months, Rip would break down every match explaining what was right or wrong. He’d not only show me what type of comeback to make in every situation or different ways of selling, but how much money I should be putting away each week. He got me my first WCW TV taping, which led to two of my best years in wrestling.”

One particular day of impromptu training stands out for Wayne. Following a week of travelling throughout B.C., the crew had the ring set up at a middle school and time to kill before an evening of matches.

“I pleaded with Ed Moretti, Sonny Myers and Tim Flowers to get in the ring,” said Wayne. “Ed talked them into it and they took arm drags and worked holds with me. It was 25 years ago but I remember it like it was yesterday. That camaraderie was what made this business so great to be in. We knew we were part of something special.”

After a few years with All-Star, Wayne worked for Emile Dupre in the Maritimes and also plied his craft for CMLL in Mexico. Then, while working for various North American promotions, came some chances to expand his profile. 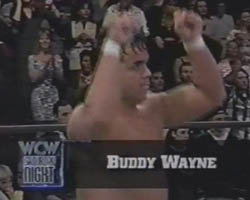 Wayne earned a reputation as a good enhancement talent, putting his body on the line to make his opponent’s moves look devastating and make them a dominant force.

“I’m thankful people see it for what it was,” he said. “I never cared about wins or losses, just being in the game. I not only made great money for wrestling at the time, but worked with some greats I would have never had a chance to work with.”

When Wayne first brought up his opportunity to work a WWF TV taping in 1991 with his colleagues in Portland, it wasn’t received very well.

“I told the guys what I was doing and Al Madril said, ‘Why would you go and do jobs on national TV?’ I thought, ‘How could it hurt?'” said Wayne. “Any exposure was good and there was nowhere to go. When I came back to Portland the following Saturday night and the WWF TV had aired, not one fan said they’d seen me lose but that they’d seen me on WWF TV. 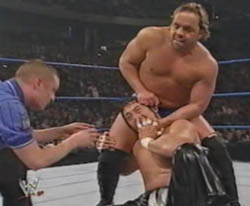 Buddy Wayne takes on Tajiri in the WWE.

“In 1996, the WWF did Raw here and they asked for 12 guys. All the guys that thought it was a bad idea in ’91 now all wanted to work the shows. The WWF flew us to the TVs, paid for your room and rental car and fed us for free all day at the tapings. Plus you worked with guys at the top of the game. It doesn’t get any more professional.”

Today, Wayne runs a wrestling school out of Everett, Wash., which he likes to dub Ohio Valley West. He worked his last match in October 2008, but is in the ring with his students four to five times every week.

“I love [training] more than actually working shows,” said Wayne. “It’s challenging because I want them to improve and love this sport the way I do. I believe that learning is full-time. They each give me two days a week here in the ring, but between the gym and watching matches, it’s really seven days a week.”

Despite the current nature of the big-time wrestling business, Wayne feels he still has a lot to offer for aspiring ring warriors. 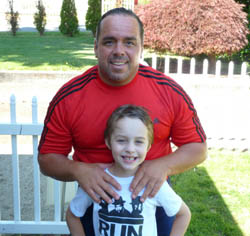 Buddy Wayne and his son in a recent photo.

“They have writers who write interviews for the guys and agents who lay out matches, but you still have to know how to wrestle,” he said. “I want each guy that comes through here to succeed and will do all I can to get them where they want to be.”

Through it all, Wayne is grateful to those that aided him in his journey, in and out of the ring.

“I want to thank all the guys who helped me along the way, that I never got to thank and tell them what a big part of my life they were, and still are; Joe Cagle, Gerry Morrow, Ron Starr, Leo Burke, and the All-Star crew, who taught me to walk in this business when I couldn’t on my own,” he said. “I was so happy to be any part of this business.”