For most of the day, a letter that Buddy Wayne wrote to me in 1989 has been sitting on my desk, while I wondered what, exactly, to write about him, following his sudden death from a heart attack at his wrestling school on Saturday afternoon, at the age of 50. 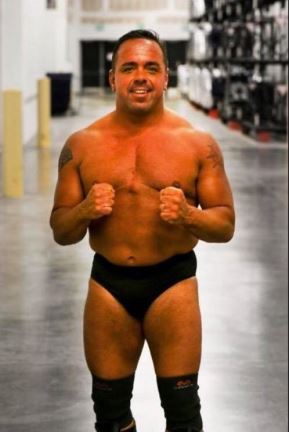 I’d collected some thoughts from the online world, but it wasn’t until I got a phone call from Diamond Timothy Flowers that I was spurred into action.

Buddy was one of the good ones, said Flowers.

“He was a good guy. I don’t think anybody’s going to be saying anything bad about him, because I don’t think there is any,” said Flowers, who had known Wayne — real name Steve Finley — for 30 years, having been up and down the road.

I’ll agree with Flowers — Buddy was a keeper, and we kept in touch, off and on, all these years.

I first met him in 1989, when he was on tour for Emile Dupre in the Canadian Maritimes, working as Wayne Gillis. I was only 18 years old, and was putting out my monthly Canadian Wrestling Report newsletter. During that show in Bridgewater, Nova Scotia, Buddy gave me a little bit of his time, and I profiled him in the next issue. (I’ve reproduced it below for you to read too.)

The handwritten letter from him, dated September 23, 1989, offered up a thank you for the newsletter that I sent him, and an appreciation for all the “well written” work throughout. He was optimistic about the wrestling business: “I’ve been working for a new organization here headed by Rocky Della Serra. He took over Tomko’s promotion, without TV & has started running 2-3 times a week in southern B.C. Things are doing a lot better now that there’s a lot of new ieas. Talked with Calgary & may be headed there this winter.”

While he worked many places after debuting in 1985, under a number of names (Wayne Gillis, Steve Finley, King Cobra in Mexico, Atomic Kid, and others), Wayne is most associated with the Pacific Northwest.

Much of his actual career is detailed in a 2011 interview with SLAM! Wrestling’s Dan Wilson — Buddy Wayne grateful for his career — and even the headline suits in retrospect. Buddy was not a braggart. He knew he was good, but didn’t have to brag about it. If he had another six inches in height, the whole wrestling community probably would be in mourning now, and not just his many friends in Oregon, Washington and British Columbia. Many of them to took social media to share their memories of Buddy Wayne:

Rocky Della Serra: “I think you had one of your first matches as my tag partner on All Star wrestling you were barefoot & I could see you were a natural worker. take care Buddy. Life is short. Sorry you left us so soon.”

Michelle Starr (Mark Vellios): “I will always cherish the memories of running up and down the highways with you. The countless times I got to work with you were always a pleasure and a night off. I learned so much from you about this business. You had awesome talent and great mind for the business. I just received an email from you Friday morning and responded this morning. I hope you were able to read it. Good bye my friend. RIP Buddy Wayne.” 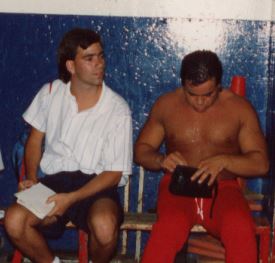 Mauro Ranallo: “His career started around the same time as mine. We were teenagers on All Star Wrestling out of Vancouver BC. He always made me laugh.”

Jonathan Sayers: “I am writing this and there is not a hint of shame that my eyes are tear stained. After hearing the loss of Buddy Wayne I completely broke down. To me he was a friend, going all the way back to the 80s I don’t think I can put into words how important Buddy was to us as individuals and the industry we love called wrestling. I feel far to broken to try and explain how important he was I think I’m going to stop trying to tell you what you all know. I don’t want to talk about the great matches he had, just going to sit quietly and let my emotions take me where they may. Until we meet again Buddy, I love you brother.”

Ben Nelson: “I’m shocked and deeply saddened by the sudden death of Buddy Wayne, a legend of wrestling in the Pacific Northwest. Buddy was a consummate professional in the ring and a true gentleman outside of the ring. There was not a single bad thing to say about Buddy; he was always warm, always kind, and always a bright spot on the local wrestling shows.”

Mike Rodgers: “So saddened by this news. He was such a good worker and a even better person. When I had a chance to ref his matches I had the unique perspective of just how good he was. He would always be ribbing, he would look at me and silently mouth something to me across the ring. I would circle around to him and he wouldn’t have anything to say. He would take copies of my bulletin Ring Around The NW and use them as foriegn objects in the ring just to get a pop from me. Thoughts go out to his friends and family.” 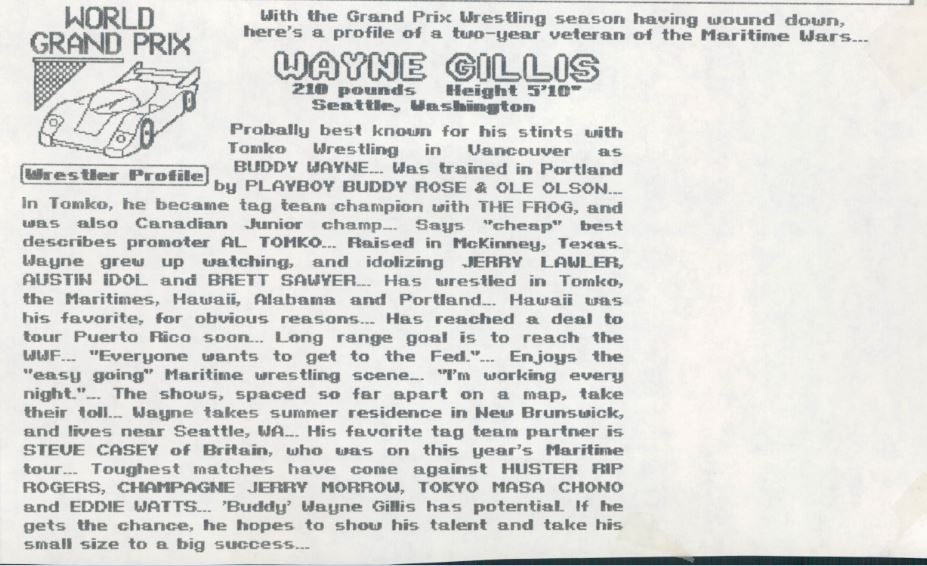 Buddy and his wife Shayna Edwards had one son, but a large family in professional wrestling. Edwards, for one, grew up a part of the Giovannetti family, with Moondog Ed Moretti essentially her uncle.

There was always a lot of pride in his students too, so let’s consider them family too. It couldn’t have been easy on Saturday, June 17th to see your trainer and friend suffer a heart attack — Buddy had had open heart surgery in 2009 — at the training facility.

Flowers, who promotes a few shows a year, praised the kind of wrestlers that Wayne graduated from the Buddy Wayne School of Wrestling. “That’s a blessing having those guys on the shows now because they actually know what’s what, not these freakin’ stiff-ass bastards who get in there and just think they’re going to beat everybody up. He trained everyone of them right and they respected him, and that’s why I started booking all these guys.”

So Wayne’s legacy lives on, unfortunately without him.

Rest in peace, Buddy. Thanks for being one of those good guys that kept in touch.