As with the October 2010 RAW taping, Calgary’s Bret “Hitman” Hart made an appearance, this time on camera. Tyson Kidd, also from Calgary wrestled but unfortunately Natalya, also on the Smackdown brand, did not.

After a dark match in which Wade Barrett defeated developmental wrestler Bo Rotunda the cameras rolled on WWE NXT. After a confrontation between Darren Young and Matt Striker, Kidd returned home to a loud ovation. He and Trent Barreta set the bar high for the evening with an excellent back and fourth match. Kidd was distracted by music playing long enough for Barreta to hit the tornado DDT for the win. In the other NXT match Maxine pinned AJ, who was also distracted this time by Derrick Batemen shoving Hornswaggle to the ground.

Superstars saw Brodius Clay – who looks like a monster in person – destroying a local wrestler and Justin Gabriel pinning JTG with the 450.

As the Smackdown cameras rolled, Bret Hart received a hero’s welcome. Basking in the cheers, he announced that Teddy Long was unavailable and Triple-H had made him the General Manager for one night. He announced Mark Henry vs. Randy Orton at next Tuesday’s live Smackdown, but Christian interrupted and demanded to use his rematch clause. Bret complied, making it a steel cage match to end Christian’s excuses. This of course made Mark Henry unhappy, and he attempted to intimidate Hart but Sheamus ran him off.

Being pre-taped instead of live lead to a few re-shoots, as Henry returned to the ring and told Sheamus he couldn’t do it again, which the Irishman did.

Christian returned to the ring to face Daniel Bryan in another fantastic match, which Christian won with the killswitch. The next bout was a trainwreck as Sin Cara faced Heath Slater. The two did not seem to mesh well with a few noticeable mistakes. After scoring the win, Cara rolled Slater back into the ring and pinned him a second time. Later in the taping they re-did the entire match.

In another great match Randy Orton defeated Ted Dibiase, who had Cody Rhodes in his corner. It is worth checking out Friday’s broadcast for this match and the Christian/Bryan match. Jinder Mahal, who started his career in Alberta as “Tiger” Raj Singh also returned home, managing The Great Khali. Like Kidd before, Mahal’s hometown advantage was for naught as Khali tapped out to Ezekiel Jackson’s torture rack. It was an impressive display of power seeing Jackson heft Khali up. 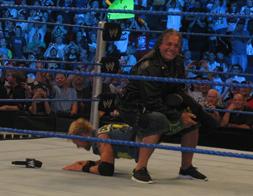 The advertised main event of Sheamus and Mark Henry continued their streak of solid big men matches. Henry cleared the broadcast table only to be sent flying be a brogue kick over the table. Sheamus made them 1-1 with a countout win, but Henry got the last laugh, standing over Sheamus as the credits rolled after the world’s strongest slam onto the ring steps.

Another huge welcome was given to Triple-H who came out to announce the main event – Randy Orton vs. Christian in a street fight with Bret Hart as guest referee. By guest referee, he meant Bret sat in a chair at ringside. And by street fight, he meant they hit each other with canes. Christian refused to wrestle, tearing apart Calgary and saying we didn’t deserve the match and he already had his title shot for Tuesday. Triple-H threw him into the ring and the two had a great match to cap off the night. Christian tried to bring a chair into the ring, but Hart stopped him… despite it being a street fight… and Orton came back with the ropes-DDT and RKO. Christian complained about Hart costing him the match, and paid for it when trapped in the sharpshooter.

Calgary has had to feast on scraps tossed by the WWE for years. The last house show in the city was in 2004, and since then they have had to be satisfied with a TV taping once a year or so. Alberta’s last pay per view was 2004’s Backlash in Edmonton and Calgary’s last pay per view was 14 years ago. With it’s rich wrestling history, long time ties to WWE, and a passionate crowd hopefully WWE takes notice and starts coming through more often.

Jason Clevett is from Calgary, Alberta