Matt and Nick Jackson, otherwise known as The Young Bucks and Generation Me, have blasted TNA Impact Wrestling’s renewed interest in the X-Division, believing the push not to be genuine.

The pair, who were released from the Nashville-based promotion just last month, spoke their minds to SLAM! Wrestling. 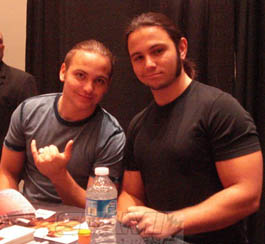 Nick and Matt Jackson at a TNA Lockdown Fan Interaction in April 2011. Photo by Bob Kapur

“Personally we think it would help the product if they did push the X division because they are the best wrestlers in the company,” said Matt.

“Unfortunately, we don’t think they will be genuine in their push, simply, because they have too much talent that they have to book.”

It is also their belief that within Impact Wrestling that there are a lot of organizational issues with the right hand not always knowing what the left is doing. The brothers use the example of their recent short feud.

“I don’t think everyone’s on the same page,” Matt explained. “I know that a lot of guys don’t know where to go when they have a question about something, because nobody knows who’s exactly in charge of what.

“Maybe there are just too many chefs in the kitchen?

“One week we were running with Tara and the next we’re not. One week Nick and I have heat with each other, and the next we’re in a stable together. Towards the end, people in the office didn’t know if we were heels or faces, so we flip-flopped. We knew then, we had to get out.”

It was actually The Bucks who asked for their release from Impact Wrestling and, while they believe they could have done more in the company, they have no regrets in leaving.

“We asked for our release because we were not being used enough to budget money for our families,” said Nick. “We simply weren’t making enough money. We asked for help and they didn’t really want to do anything for us. So, it obviously wasn’t going to work out.”

“We knew we were going to quit for a while,” Matt added. “The writing was on the wall. Overcrowded locker rooms, we hadn’t been seen on TV regularly in months, and no continuity with our characters led us to wanting out.

“I’m sure they could have done more with us, but I’m also not going to stick the blame completely on them. I’m sure there are things that we could have done differently too. All in all, we are proud of our run there and feel like we did have the capability to show what we could do, at least a couple of times.

“We could of ‘played the game’ a bit more. In professional wrestling, you need to do this to survive. We may have been a little too passive and let things happen to our characters that probably shouldn’t have. Maybe we could have been a little more protective? You live and learn.”

While their time in Impact Wrestling may not have been a fairy tale stay, the duo realize that being with the company has aided them in some ways. 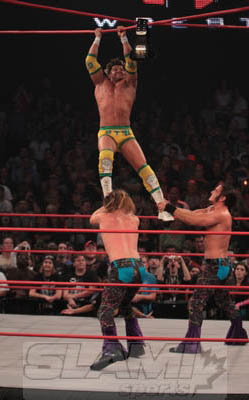 “We have a lot of information attained from being there that we will take with us forever,” explained Matt. “We learned how to work the cameras, working for a writer, keeping a time, selling and telling a story amongst many other things.

“One thing, though, from my time with them that I would have never guessed was, how unorganized the ‘big leagues’ were.”

The Bucks seem to have many opportunities and avenues that they could explore. A recent try-out with WWE could be the start of something big for the team, but they are keeping their options open and their cards decisively close to their chest.

“We’re still so young, experienced and well-travelled; there are a lot of different opportunities for us. I don’t even think we know exactly what’s next; we’re kind of just doing our own thing and seeing where it takes us.

“People have asked us about the possibility of going to WWE or back to Japan, or Ring of Honor. Truthfully, all those sound appealing to us in one way or another.

“I guess, only time will tell where we end up, but either way, you’re going to be hearing and seeing a lot from us.”