It came down to size for Louie Tillet. At 5-foot-9, that mattered more than whether he was portraying a good guy or a bad guy.

“In some towns, I was a babyface. I was one of the few that could really do that because of my size; that’s what I played on,” he told SLAM! Wrestling. “I had to work a lot harder as a heel because I was smaller than almost everybody. So it was harder for me to get heat. I did get it, but I worked really hard. As a babyface, I just had to go out there and sell. That was it.” 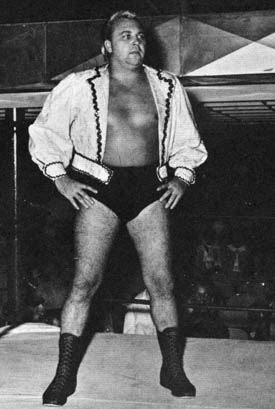 Right from the get-go in Montreal, when he met Mad Dog Vachon, Tillet was aware of his limitations size-wise, so he wisely listened and learned his craft, and within only a few years of his career, became one of the most respected behind-the-scenes minds in the sport.

Rene Goulet was another struggling worker in Quebec, his first road trip was with Tillet to West Virginia.

“I used to train with Louie Tillet before I was in the business. He was just a small, little guy, but we both loved the business, and that’s how he got in there,” said Goulet. The stint in Charleston, West Virginia, which only lasted a couple of weeks, was “horrible. I don’t know if you could make $75 in a week.”

Tillet did his research before committing to his first territory.

“I had to go to a territory where they used smaller guys. I was in Texas for a good while, but then they started going with the big guys. Morris Siegel, who used to own the territory, liked what I was doing and gave me a good push for my size — he didn’t look at my size, he looked at my talent. I did well there,” understated Tillet.

The booker in Texas, Leo Garibaldi, took a real liking to the French Canadian, who never quite gave the impression on his interviews that he had a decent handle on the English language.

“Louie Tillet was my biggest star in Texas,” the late Garibaldi recalled in 2006. “I gave him some shit to do and say when he was on TV. That was the biggest thing then, what you say on TV. You have to say things that will really please the guys or really hate them.”

Garibaldi dismissed size as an issue.

“Small, it doesn’t mean anything in wrestling. There are small guys that can eat you alive. That’s the truth.” 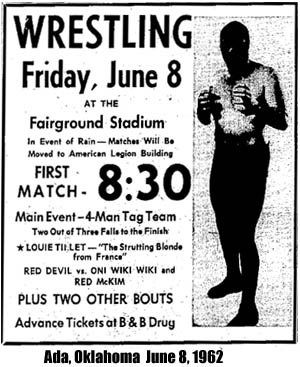 Tillet worked a huge feud with Wild Bull Curry, featuring brass knuckles matches all over Texas. “A lot of people didn’t like to work with him because they said he didn’t sell enough,” Tillet said of Curry. “But he always sold for me real good. I had some great matches with him.”

Historian J Michael Kenyon was a fan of Tillet’s work in Texas. “In the ring, he was always a sneaky kind of villain, pretending to be a good guy until the ref turned his back. Louie had one of the most expressive faces in the game,” said Kenyon, recalling great programs with Danny McShain, Nick Kozak, Billy White Wolf, and Ricki Starr.

In a 1970 article in Wrestling Revue, “The Professional” Doug Gilbert talked about Louie Tillet: “He impresses me as a little man who wants to whip the world and will go to any extreme to do just that.”

In general, Tillet will billed as being from France, and one hyping article promises “the Frenchman who entertains the fans with his own version of ‘The Twist’ during his matches.” Sometimes he was Louie, sometimes the anglicized Louis; always, his opponents and detractors rhymed Tillet with “toilet.”

A fateful decision to go to the Florida territory in 1962 changed Tillet from a front-line performer to a part-time one with backstage responsibilities.

“I decided to go to Tampa,” said Tillet. “They were calling me and they were using smaller guys back then.” 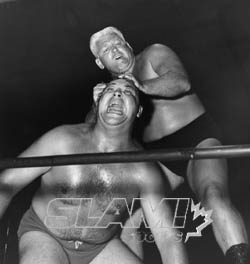 Having already been schooled by Garibaldi, with whom he would later co-book Atlanta, Tillet found new mentors in Florida owners Eddie Graham and Lester Welch.

“Lester Welch was booking with Eddie when I got there. I learned a lot from both of them, and then Lester quit and I replaced him. Lester Welch and Eddie Graham were the guys that, to me, were the big men in wrestling.”

Tillet came into Florida as a wrestler.

“I chose to handle the book. I got there and I wrestled for seven, eight weeks, and I had a talk with Eddie. I realized that there was a lot more money for me to be in the office and quit wrestling. So that’s how it went.”

Initially, Tillet sat in on the booking meetings and would go to all the towns to make sure all the finishes were the way the office wanted them. His responsibility would grow, and he would own points in Tampa and be the sole promoter in Miami Beach.

Retired, living with a view of the 8th hole of a golf course he frequents, he looks back in wonder at his workload.

“Hell, I was working eight days a week,” he said.

With his colleagues now under his booking pen, relationships changed, he admitted.

“It puts you into a real difficult time with the wrestlers. Every time that you put yourself too high, then they hate you. Wrestling and booking, the booker should never work. He should be doing the booking,” opined Tillet.

Nick Kozak, a frequent opponent, dating back to Portland circa 1957, had some thoughts on Tillet as a booker/worker. “Louie was a manipulator,” said Kozak. “It was funny the way he would work his way into the book. I guess he could talk.”

Given his lengthy stint in various locales as a booker, it’s hard to pinpoint all of Tillet’s key moments, but here are a few notable ones:

Yet Tillet found he didn’t always want the stress and workload of booking, and would leave for wrestling vacations in other territories or Japan, to reconnect with the sport he loved. (Yet he never came back to Canada for any extended run.) 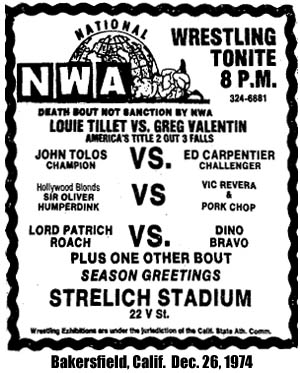 “I had enough of the office behind-the-scenes talent that I was always able to go to a territory and wrestle only three or four nights a week, and work the office with them, change their TV and the way they were doing it, and all that. Then I would take off and go to another territory,” Tillet said. In fact, he once went to Australia for a few weeks for promoter Jim Barnett just to consult on the TV show.

For a time, he paired with Al Costello, of the Fabulous Kangaroos fame, as the Internationals. He dismissed the notion that the Aussie and the Canadian didn’t get along. “A lot of it was made-up stuff from writers, whatever. We didn’t dislike each other. We competed a lot. I think we did like each other,” he said. “At the time, I think it was a good team for us to do that.”

There were times Tillet just wanted to be one of the boys.

“Back in those days, that was fun. We used to get in the cars, B.S.ing. Back in my days, when I was young, when I was in it, wrestling and booking, I loved wrestling, and everything — even the hard and bad — was good to me.”

Notoriously fickle, perhaps the boys loved him for his cooking most of all, and Tillet built a reputation that eventually paid off. 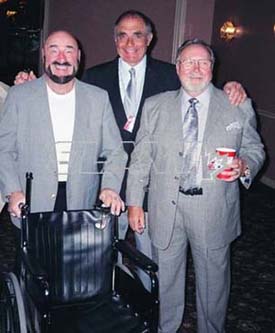 “I was cooking a lot, and the boys used to come and eat with me. Everybody said, ‘Open a restaurant,’ so when I quit wrestling I did. It was too hard work, so what I did was buy them, build them up a little bit, sell them,” he said. Eventually, he went through five restaurants. He had one for a decade, for stability, while his two daughters went to university.

Married to Judy Michaud for 40 years, they traveled as a family for much of his wrestling career, only settling down in North Carolina when their daughters were ready for high school. “This is the greatest place to raise kids,” he said of Highlands. “I didn’t want to raise my kids and think about wrestling.”

“I’ve been lucky. I’m 77 years old now and I play golf every day. The knee has slowed me down a little bit. I’ve been very, very lucky, and I’ve made a good life for myself. I was lucky to marry well, an honest woman, and we’ve been married for 40 years. We’re more friends than husband and wife.”