Tony Cosenza, dead at 93, was pianist/wrestler

Pianist/wrestler is not an oft-advertised connection, yet it was for Tony Cosenza, who died August 17, 2011, at the age of 93.

Consider this 1953 newspaper story from Beckley, WV: “Tony Cosenza, the famous wrestling pianist, will give a 5 minute piano concert during the next wrestling bouts at Memorial Auditorium here next Tuesday, at 8 p.m. 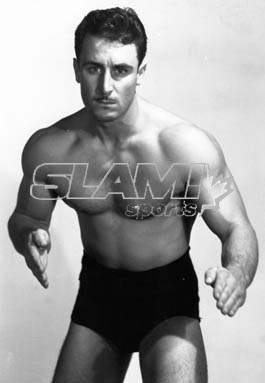 “Many wrestling fans in this area recently saw and heard Cosenza play on a television program, and thought the efforts of the Fayetteville American Legion, will be able to see the accomplished performer in person in this area. Following the concert, Cosenza will team up with Chris Belkas in a tag team battle against Jack ‘The Neck’ Vansky and Ali Pasha, the terrible Turk. This feature will be a best two of three falls, forty-five minute time limit contest.”

Cosenza, born Theodore Cosenza in Italy in 1919. He was in the U.S. Army, starting in the calvary and moving to the infantry.

After World War II, Cosenza debuted in Ridgewood Grove, an arena in Ridgewood, NY. He’d wrestle until his last match in Lancaster, Penn., in 1973, though his career had wound down in the 1960s.

He was always into weightlifting and bodybuilding, winning a few strongman contests, placing fourth in the National weightlifting championship and first in the New York State contest.

“Tony Cosenza, 25-year-old Italian grappler, who is a former weight lifter and the possessor of an amazing physique, with muscles like those of Milo Steinborn,” ballyhoos a 1952 mat preview.

Yet he wasn’t musclebound, as a 1950 Edmonton program addresses:

George (Porky) Jacobs, the Regina promoter, suffers a broken rib while refereeing the weekly wrestling matches here … Jacobs returns to Regina in an upbeat mood, however, singing the praises of newcomer Tony Cosenza … “He is about the fastest man I’ve ever seen in a ring. He’s simply terrific.”

“Iron Crusher” Tom Townsend was a kid selling peanuts and taking wrestlers’ bags into the arena when he first met Cosenza in the early ’50s in New York City. They met again a Vic Tanney’s gym around 1957-58, where Townsend was working. They connected through weightlifting, and Cosenza helped Townsend’s wrestling career progress, after it had been started by Abe Coleman. 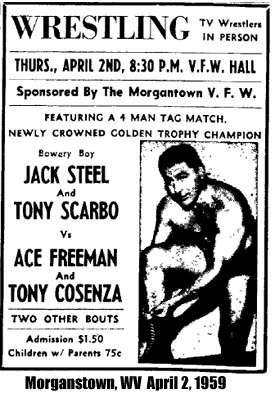 “My idea of a knight in shining armor is Flushing’s gift to wrestling, Tony Cosenza. Just under six feet in height, Tony is the object of many ‘oohs’ and ‘aahs’ from the weaker sex. And no wonder, he possesses probably one of the more beautifully muscled bodies in the ring today, rivaling [Gene] Stanlee and [‘Nature Boy’ Buddy] Rogers in that department,” reads the article, reprinted in Chad Dell’s The Revenge of Hatpin Mary: Women, professional wrestling and fan culture in the 1950s.

Besides working under his real name, and the Arturo Cosenza variation, he was The Great Herbert for Jack Pfefer in 1949, and Zabio The Beatnik / Great Zabio / Beatnik Zabio, naturally billed from Greenwich Village. 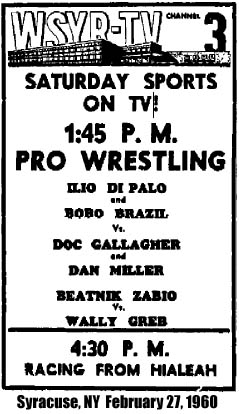 Zabio the Beatnik still makes Townsend chuckle. “He had a little beard, long hair, and he talked that jibe talk.”

At a Pro Wrestling Hall of Fame banquet in November 2005, Bret “The Hitman” Hart was able to personally thank Cosenza for another contribution — he was apparently the person who introduced Bret’s parents, Stu and Helen to each other.

For the last half dozen years, he was in an assisted living facility in Rockville Centre NY. Townsend used to go visit his friend there, taking him out for dinner and a drink. Cosenza died August 17, 2011, and a wake was held two nights later in his honour.

“We were as close as you could get. He was my best friend,” concluded Townsend.