Terry Yorkston, who died Sunday at 78, was one of the countless men who came out of The Factory that was Hamilton, Ontario, and into the wrestling business. After Yorkston’s wrestling career petered out, he became a well-known referee in Toronto, including working many a bout for the WWF.

But chances are that if you saw Yorkston wrestle, you might not have known him by his given name. Or have seen him go over many times. 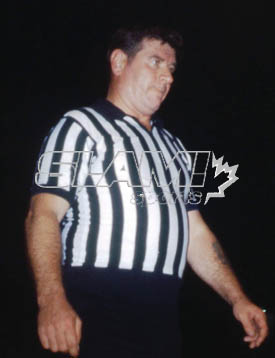 Working under a mask, Yorkston was Black Diamond circa 1979, and in Montreal for promoter George Cannon, he teamed with Duncan McTavish as the original El Santos.

Yorkston started wrestling in the late 1960s, and tried to make a go of it as full-time work, starting off around Quebec in 1968. A decade later, his name still pops up on the occasional show in la belle province.

Given his Hamilton roots, Yorkston appeared on a handful of Maple Leaf Gardens shows in Toronto well before he became a referee. In 1976, Yorkston and The Canadian Wildman challenged The Crusaders (Billy Red Lyons and Dewey Robertson) for the International tag belts recognized by the territory. Later that year, he challenged and lost to Brute Bernard at MLG.

Yorkston’s refereeing days start in the late ’70s, refereeing Ontario shows for the likes of Reggie Love and Bull Johnson. Around 1981, became the third man in the ring for the matches co-run by the Mid-Atlantic Wrestling promotion, which worked with the Tunneys in Toronto. His career overlapped into the Maple Leaf Wrestling program which reached wide a Canadian audience when Jack Tunney switched allegiances to the WWF.

Former WWE referee Jim Korderas was just a young, skinny Toronto kid getting a break when Yorkston lent a hand — and more.

“Him and Billy Red Lyons were really the two guys that helped me out the most,” Korderas recalled of his early days. “He was really down-to-earth, he was so cool, he was so laid back, it seemed like nothing fazed him. I never saw him upset. And always helpful.”

Korderas can’t resist his classic story of Yorkston coming to the rescue.

“He saved my bacon in my very first Maple Leaf Gardens appearance,” Korderas began. “I split my pants my first match ever at Maple Leaf Gardens, wide open. When I got to the back after the match, Terry says, ‘Don’t worry about it. Did you bring another pair of pants?’ I had to think about that, and went, ‘No, I didn’t.’ Here I was, I was this skinny kid, and Terry was a little, by then when he was refereeing, he was a little heavier. He says, ‘I’ve got an extra pair of pants for you. They might be a little big for you, but you can wear them.’ I put them on and they were huge, because I was just a skinny kid. So I refereed the rest of the night with Terry’s pants on; they looked like MC Hammer’s pants.”

The expansion of the WWF resulted in the decline of the Toronto office, and Yorkston faded from the wrestling limelight.

His primary employment had been as as a stevedore on the docks for many years.

“Sailor” Bob Clark of Hamilton was one who kept in touch with Yorkston.

“He was always go, go, go all the time. You could never pin him down at any time,” recalled Clark, adding that it wasn’t uncommon to find Yorkston hanging out at a local hotel. 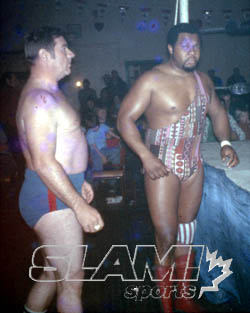 Other friends, like Pat Blake, mentioned Yorkston’s commitment to watching his two grandchildren whenever he got the chance.

For the last few years, Yorkston was confined to a long-term care facility in Stoney Creek. “He was always a nice guy. If I was going anywhere close, I’d be sure to pop in,” said Reggie Love. “Last time I saw him, he looked a lot taller. What had happened is he’d lost a lot of weight.”

Charles Terrance Yorkston died at St. Joseph’s Hospital on Sunday, August 7, 2011, in his 79th year, and is survived by his son, Robert-Daniel Yorkston, his grandchildren, Brody and Sasha, his brother Alexander and his godson Matthew-Daniel Mitchell.

The family invite friends to a time of visitation on Thursday, August 11th, from 11 a.m. until the time of the service at 1 p.m. at Hamilton’s Dodsworth & Brown Funeral Home (King Street East at Wellington). He will be interred at Woodland Cemetery.