More to John Morrison than the name

Though he physically resembles the legendary frontman of the 1960s band The Doors, WWE superstar John Morrison has no plans to follow in Jim Morrison’s tragic footsteps. Unlike the singer, who burned out after five years on top of the world, Morrison intends to reach that level and stay there.

“I would like to be the WWE or World Heavyweight Champion within a year,” he told SLAM! Wresting during a recent promotional stop at the Viewers Choice Canada office in Toronto. “That’s something that I’ve thought about a lot. If I have the opportunity to have a series of matches with someone who’s at that level, I think I can rise to that level and prove that I’m there.”

It’s been seven years since Morrison started with WWE after winning the company’s Tough Enough competition. Since then, he’s had titles in the tag team division, and worn secondary singles championships, including the Intercontinental and ECW championship titles, but the big two belts have eluded him so far. 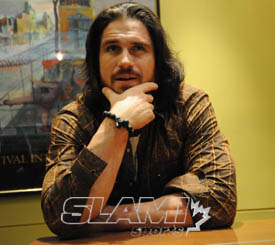 Morrison has been one of the most popular wrestlers in the company. This is largely attributed to his unique style, which is largely based on the practice of parkour. His moves have led to some true highlight reel moments in recent months, including a spectacular moment at this year’s Royal Rumble, where he avoided elimination by leaping from the ring apron to grab onto the ringside barrier, and then making his way back into the ring all while keeping his feet from hitting the floor.

“I’ve always been a big fan of movement,” he said. “I was a fan of (that kind of wrestler) growing up — Shawn Michaels, Ricky Steamboat, Macho Man — a high-flying style. I was also a big fan of Kung Fu movies — Jackie Chan, Jet Li, Bruce Lee. Being a fan of the movement is what makes me like wrestling as a fan favourite more. Because I can think of new ways of doing things — flashy things, things that are more difficult — I think that meshes really well with being a fan favourite.”

The ability to connect with the audience is also critical to success. This was a bit of a challenge for him very early on, as it took some time before he landed on his current persona. In his first few months on TV, his character name changed many times — from Johnny Blaze to Johnny Spade to Johnny Nitro. It wasn’t until he adopted the moniker of John Morrison that things started to click. While some might think that the name was thrust upon him by the creative team, solely because of his resemblance to the Doors singer, Morrison dispelled that notion.

“Morrison was my idea. I had a couple of ideas; Morrison was one of them because I’m a big fan of Jim Morrison and the Doors.”

To better immerse himself in the role, John did some additional research into Jim’s life, and found that he connected with the singer in more than just looks.

“(Reading) his biography and some other books, and some of his books of short poetry, I really got into him,” he said. “The stuff that he wrote is amazing. Everything he wrote, the words have so many layers, so many meanings. He had that mysterious quality. He was always on the edge, very interesting.”

Of course, the line between genius and insanity is thin, and the singer’s life story is parable of that. Morrison the wrestler sees how walking that line can also be used in a positive way.

“A lot of times, great art comes from an unstable place. When you see something really compelling, whether it’s a great musician or actor or artist, I think that’s what’s happening — that person is channeling the raw emotion into whoever it is that’s consuming what they’re doing. I try to take that into my career. They way I talk, the way I do things. I think that whole philosophy is something that’s really cool.”

However, it’s not enough to simply take someone else’s identity and make a character of it, he clarified. To be a success, the audience has to believe in the genuineness of the character — and for that, it needs to come from a real place.

“Anything that’s successful is really just an extension of the person. So I’m me, I’m John Hennigan, and there are parts of me that I turn the volume up on in being John Morrison. The more you focus on being yourself — and, of course, louder and more energetic — the better everything comes out.” 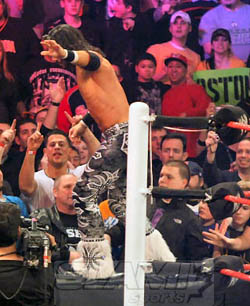 But it isn’t character alone that will engage the audience. There are other skills required to communicate effectively, and Morrison is doing his best to develop those as well.

“I love to do improv,” he said emphatically. “I wish I had more time to do it, I think it’s very important (for a wrestler). If I had another three months off,” he laughed, referencing the time he was away with his neck injury, “I would jump into it, because I think it would help me a lot.”

He also does what he can to pick the brains of other people that he sees as masters of communicating with the WWE Universe.”

“Vince [McMahon] is the master of communicating, I think. He’s given a lot of pointers to a lot of people. I’ve asked [Chris] Jericho for advice, Triple H, Dusty Rhodes is a genius at talking. When I was in FCW (WWE’s developmental company) this past week, I was there for promo class. Listening to Dusty’s thoughts on communicating — from your posture and inflection and the content — all the thoughts he has on communicating is so interesting.”

In Morrison’s view, success can’t be gained by resting on your laurels, but rather taking measures to continuously improve at all aspects of the game.

“It’s lifelong learning,” he observed. “A lot of times, I compare wrestling to learning a martial art, maybe kung fu or tai chi. Those things, if you think about it, are also lifelong learning. There’s forms, sparring, meditation. It’s the same thing. You can constantly improve. There’s no point you can master something to the point you never need to learn anything else. It’s like medicine. If you’re a doctor, you can never say, ‘Okay, I’ve learned everything I need to know about the human body.'”

Nor is it sufficient to become complacent with your position in the company — to that end, Morrison has many thoughts about what he would like to accomplish in WWE, even outside of the ring.

“In five years, I would like to be in a WWE film, specifically in an action film. I don’t think WWE has done a good action film yet. I want to do an action film centred more around on the fighting style rather than something centred on explosions and special effects, because that’s the kind of thing I really liked when I was a kid.”

And, of course, there is always the potential of doing another WWE DVD. Last year, WWE released Rock Star, which was a single-disc profile of the superstar. The DVD received middling reviews; while the match quality was very high, the criticism was directed towards the interview portion, which was done in character. Morrison would gladly welcome another opportunity down the road.

“When the DVD came out, they said it was going to be an experiment of the format. They wanted to try a one-disc collection, as opposed to the multi-disc sets that they did for John Cena, Rey [Mysterio], Triple H.”

While he had creative input on the collection, there are a lot of things that he would like to add to a future one, which he hopes would include aspects from every part of his career.

“When we were putting it together, I wanted stuff from OVW in there, there was a lot of cool stuff with MNM — Joey Mercury, Melina and I — our debut on Smackdown, a match with MNM against Eddie [Guerrero] and Rey from Madison Square Garden. There was so much stuff that wasn’t on Rock Star that was a big part of my career that would be really cool on a later DVD release.”

Of course, since the DVD was released, there have been many other career highlights as well. Indeed, his growth since his Tough Enough days has been nothing short of phenomenal. Which prompted him to give some recent advice to the most recent winner of the show, Andy Leavine.

“The main thing that I told him so far — you know how he’s doing that ‘Silent Rage’ thing? I told him to not be surprised if Silent Rage gets a silent ovation on Raw,” he joked. “(Leavine) laughed about it, we had a good time. No, honestly, I met him in FCW and we had a chat about for me coming up that stream. I think he’s going to do well.”

“Right now, it’s hard because he hasn’t proven anything yet. But who knows? He may come in tomorrow and prove that he’s a great talker, that he’s picked up a lot of stuff, both from Tough Enough and the work that he’s been doing in FCW, where he’s learning from Steve Keirn, Dusty, Dr. Tom (Pritchard) and Norman Smiley. He could come in and shock everybody.”

“That’s the beauty of sports entertainment,” he continued. “You never know when the light’s going to turn on for somebody. Maybe it’s already on for him. When I won Tough Enough, it was like, ‘Congratulations! You’re going to [developmental in] Louisville.’ But look where I am now.”

Or, to put it in a more poetic, Jim Morrison-esque way, “I was a caterpillar. I sprouted wings, and now I can fly.”

Bob Kapur is a big Doors fan and does improv — if not for his physique, he could be the next John Morrison. E-mail him at bobkapur@hotmail.com.