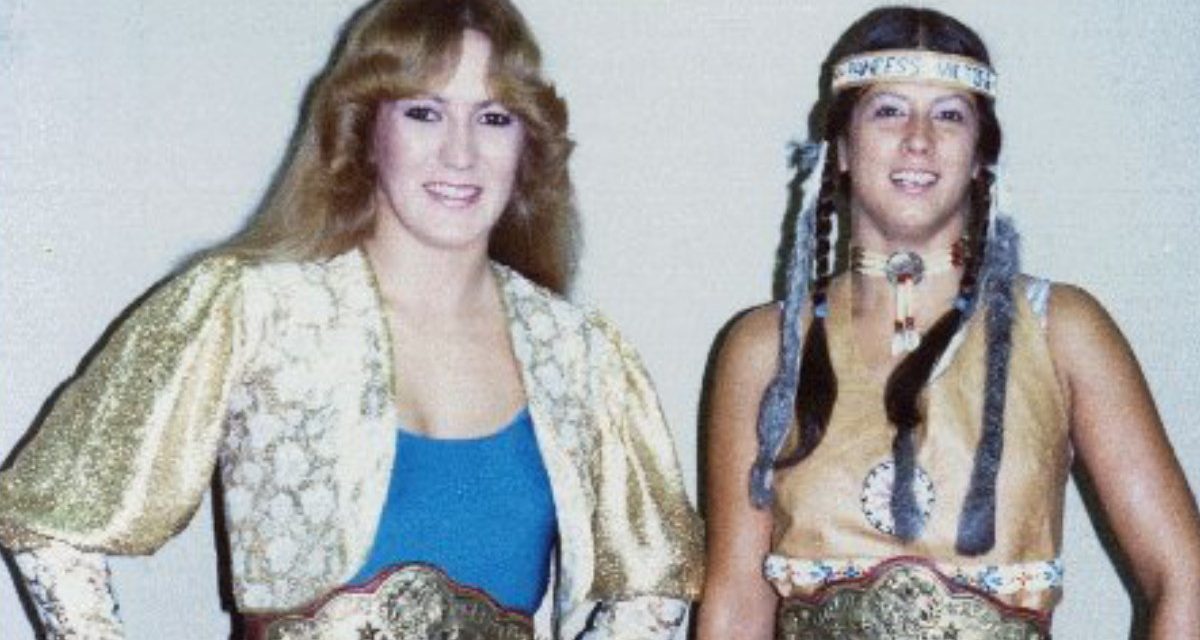 Some remember the dates of their first championship or their wrestling debut. For Princess Victoria it’s September 1, 1984 that is etched in her memory. That was the night she broke her neck and never wrestled again.

The WWF show was in Philadelphia, at the Spectrum.

“We were in the arena across the street from the Michael Jackson Victory tour [at JFK Stadium], and we didn’t think we were going to draw anybody — and that was a sold-out house,” she recently recalled for SLAM! Wrestling. 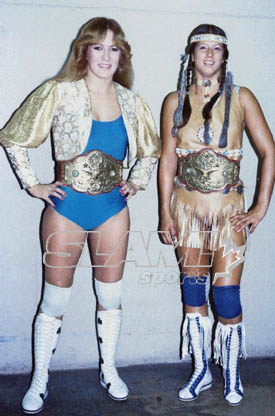 “It came out of the blue. I got piledrived by Despina Mantagus, didn’t realize I was hurt in the ring, finished the match. Went into the dressing room, sat down on a bench, moved one way, and I had a pain from the top of my head to the tips of my toes, to the point that I was literally screaming.”

WWF officials sent her in an ambulance to the hospital.

“They did an X-ray and told me I had a minute fracture on my second vertebrae. They were prepared to put me in surgery. I said, ‘Oh, no, no. You’re not operating on me, because once you start, you don’t stop.’ A fracture would heal. If it had been broken, of course I would have had no choice,” she said, ignoring the warning that she would never lift more than 20 pounds again.

On the sidelines for four months, she couldn’t wait to get back to wrestling, a passion which had consumed her from her childhood as Vicki Otis in the Pacific Northwest.

It wasn’t to be, however.

“Every time I tried to take a bump, it was like somebody was slamming me with a sledgehammer.”

She quickly learned that out of sight indeed meant out of mind.

“I faded away,” Otis said. “It destroyed me, it devastated me.”

Then Facebook came to the rescue, 25-plus years later.

“I had basically stuffed wrestling in the back of my brain,” Otis admitted. Then she joined the social networking website and reconnected with so many old friends and colleagues, like Judy Martin, Joyce Grable, Lelani Kai, and perhaps most importantly, her training partner, Velvet McIntyre.

“So many memories, and every so often, another one will pop out. I’m enjoying being back in touch. I miss Lelani, I miss Velvet, Judy, all of them,” Otis said.

Not only was it a quarter century ago that she was a wrestling star, but her career in the ring lasted only four years.

Born May 5, 1961 in Goldendale, Washington, the 5-foot-9, 156-pound Otis never met her father, and had moved out of her mother’s house by the time she was 16 years old. All she knows about her dad is his name and that he was of Saanich descent.

A “dyed in the wool wrestling fan,” Otis loved attending the matches, and still has an autograph Jimmy Snuka gave her when she was nine years old.

When she lived on her own, Otis was a regular at the Portland, Oregon matches. She stood out, taking the time to dress up and look nice. “They started putting me in the front row and not charging me. So I went every week. I was a waitress at the time, and money was tight, but I went every week,” she recalled.

After the waitressing gig ended, Otis turned to Sandy Barr for work.

Besides promoting shows for Don Owen, Barr owned a print shop at the time, and Otis worked there too, helping with the promotion’s programs and developing photos in the darkroom. Barr was grooming her for bigger things. At one point, Barr booked a two-month tour, but Otis did all the leg work, calling the facilities, getting the matches set, and arranging the promotional work — and then she was a roadie for the tour.

When she was 18, Otis made up her mind to be a wrestler, and debuted before she had turned 20. Barr never charged her for the training, though Otis insists she worked it off many times over with her “multifunctional” jobs in Barr’s various enterprises.

Velvet McInytre of British Columbia was her primary training partner; another notable training with them was Magnum T.A. (Terry Allen).

“It was hard. I guess you would call it the older-style training. You didn’t know anything was fake until you actually had your match, type thing. It was hard,” said McInytre. “It was basically a couple of hours ring time every day. A couple hours calisthenics, stuff like that, every day, running to and from the arena every day. It was hard work. My head was like a watermelon for about the first month.”

“We had to learn Greco-Roman, we had to do takedowns, sit-outs … bridges,” Otis said, praising Barr. “Sandy was not a greedy man. He was not into training people for the money. He wanted people trained properly. He brought in Dale Lewis, Professor Dale Lewis had a hand in our training. Rip Oliver had a hand in our training. About once a month he’d bring in a wrestler that had a different style.”

In 2006, Barr talked about his two prize female students.

“Just training itself is very, very hard, and thankless, because you’re not getting even a clap for it. Maybe a pat on the back from me, or something, but it’s hard work and that’s about all they get. The girls, I had them in such good shape that they were like boxers when they get into too good of shape, they get what they call fine, and they want to fight and every word you say to them is a fighting word. That’s the way they were before I turned them pro.” 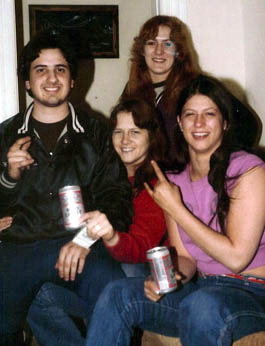 “Oh God, I remember — the longest 20 minutes of my life,” said Otis, admitting it was harder than she thought. “When you’re working out in a ring, and there’s nobody around, is totally different than when you’re working in front of a crowd. You’re more aware of what you’re doing because you want to please the crowd. … We weren’t used to the adrenaline rush in our first match. You have to keep that in control or you’re going to blow up.”

The duo went back to training for another three months before hitting the road for good. Initial tours included B.C. for Al Tomko and the Pacific Northwest for Don Owen — which Otis remembers very well.

During a battle royal in Salem, Oregon, Princess Victoria was in the ring at the end against “Playboy” Buddy Rose. “I ended up getting smacked into the brick wall. My family lived in Salem at the time, and my little brother happened to be in the crowd. When I come up bloody, my little 10-year-old brother Doug comes running out of the crowd, straddles me, and pulls a fist back in a boxer’s stance against Buddy. ‘If you touch her, I’ll kill you!’ I have never been so proud of my little brother as I was that day.”

Otis was Princess Victoria “from day one,” using outfits she already owned, and learning beading from McIntyre. Her original headdress a short time later was a gift from the late Jay Youngblood.

Barr soon realized that booking the women was more work than he expected, so her turned them over to the Fabulous Moolah (Lillian Ellison).

Otis still raves about the quality of the talent that Moolah had at her disposal at the beginning of the 1980s.

One of those stars was the rising star, Wendi Richter. “What an awesome woman,” raved Otis. “She could put a beanbag over.”

“Wendi and I wrestled against each other a lot, and she was a heel. Now, when we went out of country, I was the heel.” Asked to explain, Otis said it was black and white. “In places like Trinidad, Santo Domingo, Puerto Rico, blonde hair and blue eyes is good, brown hair and brown eyes is normal.”

Her greatest faux pas came in Santo Domingo, the capital of the Dominican Republic.

“I put my foot in my mouth. I was the heel and I went to do an interview. The day that Wendi and I landed, their vice-president died, which postponed our match for a week. I did not know he was revered like we revere John Kennedy. I’m doing an interview on the radio and there’s a guy translating for me. They’re wanting to know what I think of Santo Domingo. I went totally heel — ‘It’s a dirty little place with dirty little people. And I really don’t appreciate you postponing my match for a week after you’ve begged me for three years to come over here. I finally accept your invitation and you postpone my match just because some vice-president died? The first night they had to put up security. I stepped in the ring, and they were throwing oranges at me. They were trying to cut off my pigtails. I would go out to the ring and I was surrounded, literally, by five guards. They had a body blanket on me. They would reach through, and if they could find just one little hole, they would pinch me.”

Her international travels resulted in the most danger — “I had a ball. I was 10-foot tall and bulletproof at that time” — but it was in the about-to-hit-it-big WWF that she was on top of the world as WWF Women’s Tag Team champions, with, naturally, McIntyre.

“Velvet and I won the women’s titles in Madison Square Garden. I’ll never forget that day, because I’d never worked in front of a crowd that size,” Otis said. “If you ever see the match, you’ll see me walking around Velvet, looking. What I’m saying as I’m walking around is, ‘Look at all these freakin’ people, Velvet!’ She went, ‘Yeah.'”

Never having lost the titles, Otis’ career came to an abrupt end.

“When I left the business, I just kind of fell out of sight,” she said. “I was really upset that I had to leave the business, because it was my life.” To fill the void, she married her first husband, who didn’t like wrestling, so she didn’t watch much. While the marriage didn’t last, she did fall in love with Franklin, Virginia, and she still lives there today.

For ten years, she ran the “Used Not Abused” thrift shop in town. After marrying for a second time, she went back into the thrift shop business with a different store in nearby Cortland. Otis admitted she loved “the great treasure hunt” of owning a used store.

Nowadays, she is loving wearing dresses again, as a financial and life planner; moving furniture in a thrift shop never went well with dressing nicely. Her second husband, Jack, died from a heart attack while they were driving, but Otis talks about the positive, how he gave her the last 10 years of his life, and gave her the best 10 years of hers. She follows the progress of her son, John, closely, as he fast tracks his studies in law at Oklahoma.

And, she teases, wrestling might just come back into her life. For the longest time, she hid her past, ashamed of the antics of the “divas,” but now, buoyed by the memories spurred by Facebook, she’s considering working on a local promotion.

“I have fans come up on my Facebook, and I can’t believe that anybody even remembers me. I mean, my Lord, it was 25 years ago!”