Less than a year into his stint on the main roster, Alex Riley already has been in bigger spots than some WWE superstars will be in their entire careers.

Not only did Riley accompany The Miz to the ring for his WrestleMania 27 main event match with John Cena, but he’s also been in the mix with legends like The Rock, “Stone Cold” Steve Austin and “Rowdy” Roddy Piper. Not only that, he’s more than held his own with them. 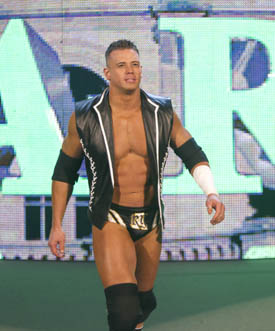 If his rookie year is any indication of what’s to come, Riley could be in line for big things down the road. In fact, as he told SLAM! Wrestling this week, you couldn’t have written a better rookie year.

“If somebody came to me five years ago and said you’re going to start your career on Raw with the WWE Champion, at that point I would’ve been in a bit of disbelief, I would’ve been skeptical,” Riley said. “And then for them to say that I would help Miz in the main event of WrestleMania when he goes head-to-head with John Cena in front of 80,000 people, I would’ve thought this guy was crazy telling me these things. I’ve had an unbelievable start to my career.”

As unbelievable as it’s been, Riley’s great opportunity has come with great pressure. Riley noted it’s quite easy to get lost in the shuffle among all those big names but he doesn’t think that’s happened to him.

“You can’t fool the WWE Universe and the masses of people who watch WWE,” Riley said. “If you don’t look comfortable, if you don’t look like you belong, they’ll pick up on it. So there it is. So when they give you a microphone and tell you you’re going to say some words with Rock or with Austin, you’re going to have to defend yourself against them, there comes a lot of (pressure) and you want to step up to the plate.”

Riley got his start with WWE on Season 2 of NXT where he was paired with one of the fastest rising stars of 2010, The Miz. During that season, The Miz not only recaptured the United States Championship, but also won the Money in the Bank ladder match. Of NXT’s five seasons, that pairing probably was the most perfect.

“I think when I came to WWE and I had the opportunity to get on NXT, I was very confident in my abilities and thought I could bring a lot to this company,” Riley said. “I’ve always thought that from the start, but to be paired with a guy that was moving the same direction I wanted to be going at a rapid pace was great for me. I could learn a lot from him. He’s great on the mic, I consider myself to be very good with the microphone, it’s one of my strengths. So to put two guys like that together, I think it just brought out the positives in both of us.”

NXT proved to be a great starting point for Riley. He said many people coming from developmental were skeptical about the show, but he welcomed it with open arms and he was better off for it.

“I thought the 13 weeks I spent on that show was just a rocket ship in the development of Alex Riley,” he said. “I was put in positions on that show that I’ll probably never be put in again, or not to the degree that I was, so it was an incredible challenge.” 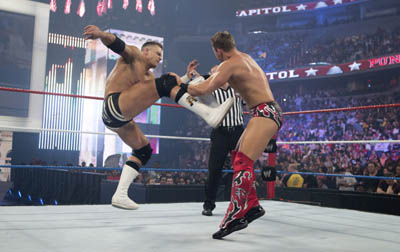 After finishing third on the show, Riley was brought in as Miz’s “apprentice.” Riley was ringside when Miz cashed in his Money in the Bank contract to win the WWE Championship in November and remembers it being a “magical night.”

As Miz reversed Randy Orton’s RKO attempt into the Skull-Crushing Finale, Riley could be seen in the background literally jumping for joy and then celebrating the win with Miz on the ramp. He said what everyone saw on TV in that moment was “true enjoyment” for him.

“Me and Miz had grown extremely close at that point,” Riley said. “He was there from the start for me on NXT. There were questions that I had that he gave me honest answers to and tried to help me with my career. In turn, I tried to help him with his career and for that to all culminate in that night and for me to be standing out there when he won the WWE title for the first time in his career — that moment was extremely exciting for me.”

The winter saw Riley back Miz through multiple defenses of his WWE Championship, but things fell apart and Riley and Miz split in May. The two have feuded with Riley picking up two wins on Miz, including one at last month’s Capitol Punishment pay-per-view. What’s been interesting throughout the process is how the fans have taken to Riley, someone who is a fresh face in the company.

For Riley, who competes with seven other Raw superstars in the Raw Money in the Bank ladder match Sunday in Chicago, he would not change a single thing about his rookie year.

“I’m extremely happy with my rookie year in WWE,” he said. “If I did change something, who’s to say it wouldn’t have gone in a completely different direction. I’m very happy to be where I am. To work with the guys I’ve gotten to work with in the WWE in my first year is just mind-blowing. I wouldn’t have worked with anyone different, I wouldn’t have changed a thing because it’s been a fantastic experience so far, in and out of the ring.”