MILTON, ON — Throughout his legendary career, Tiger Jeet Singh faced off against a number of hard opponents. On Saturday, he faced one of his toughest yet in the form of Mother Nature. With help from a number of tag team partners, he was able to come up with another victory, ensuring that Tiger Fest 2011, his annual wrestling fundraiser show, was a major success. 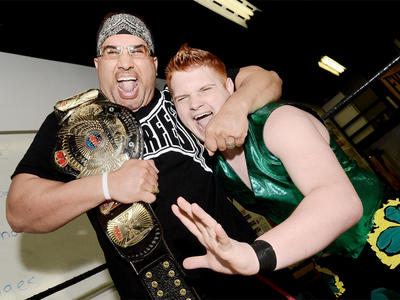 The wrestling show was scheduled to be held at an open air venue in downtown Milton, Ontario. The lot, owned by Troy’s Diner, had been converted into a makeshift arena, with bleachers set up around the ring where the evening’s event was going to take place. Unfortunately, rain had been falling all afternoon, and the rumblings of thunder in the distance put the show in jeopardy. Not only would it be unlikely that fans would want to brave the elements, but even if they could, it would pose too much of a risk for the wrestlers to perform. Consequently, with less than two hours to belltime, the event’s organizers made the call to move the show indoors.

Led by head trainer Rob Fuego, the roster of Squared Circle Wrestling tore down the ring, transported it down the road to the CrossFit training facility, and set it up again, all in record time. In the meantime, Tiger Ali Singh (former WWE star, and Tiger Jeet’s son) started the mass communication efforts to inform fans that the show was still on, albeit in a different venue than originally planned. Judging from the approximately 1,400 in attendance, the message was clearly received. And it’s a good thing, because those in attendance were really treated to a great event.

Before the bell, were some presentations to the winners of Tiger’s High School Challenge — an athletic competition for local high schools — and speeches from various political dignitaries, sponsors, guests, and finally Tiger himself. Next up were some songs from Canadian recording artists Prita Chhabra and Khalel, and a rendition of “Oh Canada” from some local students.

The main event of the wrestling show saw former TNA star Sonjay Dutt square off against former WWE star “Highlander” Robbie McAllister. After some dirty tactics, Robbie stole a win, to the outrage of the predominantly East Indian crowd. From the crowd, though, Tiger Ali Singh could see the referee had made a mistake and went into the ring to let him know. After some targeting questioning revealed that the referee had been paid off, Tiger took matters into his own hands. He made an impromptu match, teaming up Dutt with Farhan Hassan (aka Farhan Faruqui) to face McAllister and Tyson Dux, since earlier in the night, the same corrupt official allowed Dux to cheat to beat Hassan. During the match, Tiger showed that he still could go, dropping McAllister with a huge DDT and Dux with a Stunner, giving the East Indian duo the victory.

In other matches, Milton’s own Jason Chase won a match for the first time, using his hometown advantage to beat Anthony Fiasco, Brent B, Marcus “The Great” Marquez, Sebastian Suave and Vega in a 6-man scramble; Gabriella Vanderpool beat Jodi DiMilo, and the team of former WWE superstars Bushwhacker Luke and Tatanka and former TNA star Kiyoshi beat a powerhouse team of Boris Brezhnev, Pierre Shadows, and James Champagne.

After the match, every fan was able to get an autograph and picture with each of the wrestlers on the show, as well as The Destroyer (Dick Beyer), who was in attendance, Tiger Ali Singh, and Tiger Jeet Singh.

Proceeds from Tiger Fest 2011 will be donated to McMaster Children’s’ Hospital, the Halton Learning Foundation, the Salvation Army, and towards the Japan Relief Campaign.