She may pronounce it “SHIM-MAH” in her Australian accent, but Madison Eagles is doing her darnedest to make sure that the world knows a lot more about the company, SHIMMER, that she represents as its champion.

A 10-year veteran of professional wrestling, Eagles’ story is a remarkable one. This Saturday, it brings her to Montreal for the NCW Femmes Fatales show, a place near and dear to her heart, though she’s never wrestled pro there. 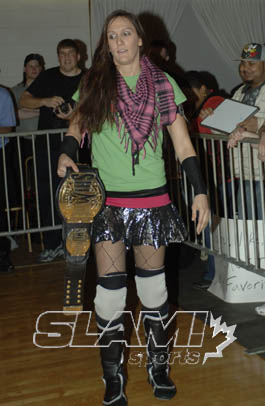 Madison Eagles with the SHIMMER title. Photos by Buddy LaMantia

Turns out Eagles spent a month at the Montreal Wrestling Club a number of years ago.

“I was training a lot in Australia. My Australian coaches sent me over there — actually my Australian coaches were German, and they knew the German coach of the national team and the Olympic team there. So they sent me there for a while because originally they were coaching me to try to put me into the Olympics, representing Australia,” Eagles, 27, recalled for SLAM! Wrestling.

Mixed Martial Arts, especially Ju-Jitsu, have been a passion for Eagles. In Montreal, she got to know UFC star Georges St. Pierre a little, as they worked out at the same gym.

Though it may be predetermined, professional wrestling satisfies her need to compete.

“When I was doing the amateur and all the MMA training, professional wrestling took a bit of a backseat for a little while there because I was swimming for that,” she said. “I still love it. I wish I could do Ju-Jitsu every day. I think the way that I try to wrestle is different … there’s not just the kicking and submitting, there’s the jumping, the jumping off balconies, all that jazz.”

The 6-foot-1 Eagles is perhaps not as well known as she should be, said SHIMMER promoter Dave Prazak.

“Madison is a tremendous ring general, and has been a part of some of the best matches in our promotion’s almost six-year history,” said Prazak. “Her title defenses thus far against wrestlers like Cheerleader Melissa, Ayumi Kurihara, her protege Jessie McKay, Mercedes Martinez, and Ayako Hamada have all demonstrated her wide range of abilities inside the ring and versatility. She is unquestionably one of the top performers on our roster, and someone the entire wrestling world should take notice of.”

And the “world” part is definitely key when talking about “The Punisher.”

Born in Australia, where she loved gymnastics, dancing and swimming, Eagles (real name Alex Ford) trained to be a pro wrestler with International Wrestling Australia and realized she would have to really travel to get her name out there. Married to wrestler Mike Eagles, she made numerous trips to the United States, including a 2003 stint in Ohio Valley Wrestling, and the couple eventually won the green card lottery, and are able to stay, living outside Philadelphia with their 4-year-old daughter and 15-month-old son.

Having traveled so extensively, Eagles claims that the SHIMMER brand carries a lot of weight.

“I think everywhere in the world recognizes the SHIMMER title. I know I’ve had people from England, Japan, everyone knows SHIMMER,” she said. “A lot of guys know SHIMMER. I’ve met a few guys that have been like, ‘Oh, you’re the SHIMMER champion!'”

The Illinois-based SHIMMER women’s promotion has become a target for female wrestlers.

“I think for a lot of women in professional wrestling, that’s their goal, across the world, to work within SHIMMER,” Eagles said. “Because we have girls from Japan and England and Canada on the show, even if they are on a rotation, they spread the word too about how much they enjoy it, how much they enjoy the backstage, actually being on the show and what an honour it is. I think the word gets spread that way as well.”

Being a legit 6-foot-1, Eagles gets the chance to tangle with men as well on occasion.

“I can do just as much or even more than even the small girls. The only reason I don’t do high flying is no one is big enough to catch me,” she confessed. “I can actually do all that sort of stuff, and when I do wrestle the guys that’s when it comes out.”

Eagles beat MsChif for the SHIMMER title on April 11, 2010, making her only the third woman to hold the title.

“Despite initially being located on another side of the world, Madison showed great dedication and commitment to the SHIMMER product by making those long trips to Chicago on a regular basis,” said Prazak. “Though she was still a relative newcomer to the SHIMMER audience at the time she took the SHIMMER Championship from MsChif in 2010, our fan base has really shown their appreciation for her skills during the time since, and truly accepted her in that top of the card role.”

She relishes being seen as a leader. “A lot of people like me working the younger girls because I can help them come to the next level, I can help them improve their wrestling skills.”

It’s fellow Aussie, Jessie McKay, that she is most associated with helping. 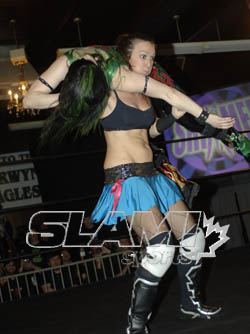 “I’m the one that trained her, I brought her up through the ranks, I helped her get into SHIMMER and really get her name out there,” said Eagles.

She was stumped to name just one person who made a difference in her own career.

“To be completely honest with you, although my husband has encouraged me and helped me so much just with my knowledge of wrestling, and realizing just how much I really can do in the ring, it’s really been me that’s really pushed hard because I’m dedicated and motivated, and nothing’s ever good enough for me,” she said. “It’s really been me pushing all the way. I’m the one that went out there and got my tapes into SHIMMER, to get them even looked at.”

Besides working for SHIMMER, Eagles takes bookings with other promotions, such as CHIKARA. Those shows are a chance to really show what women are capable of in the ring.

“We all try to put in a lot more sporting efforts,” she said. “I think we get a lot more fans through that. I think it’s growing on everyone that the women can actually wrestle.”

Women are also mothers, and with Kharma (Kia Stevens) announcing her pregnancy on WWE Raw the night before this interview, Eagles offered up her advice to balancing it all.

“I think if you just take it easy and let it happen, it becomes a lot easier. If you’re too stressed, if you’re only concentrating on the wrestling, then there goes the family life; if you only concentrate on the family life, then there goes the wrestling. If you just let them mix in together and you take it easy, and just let what happens happen, I think that’s the way to do it. That’s the way I make it work,” said the mother of two.

Her daughter, who does gymnastics, loves wrestling.

“She understands when she’s watching what’s happening and stuff like that, but she still gets afraid. Obviously, we’re getting the crap beaten out of us, but then she wants to wrestle us on the ground in the lounge room,” laughed Mom.