It’s pretty remarkable to be writing about a 31-year-old professional wrestler who has had less than a dozen matches and is currently learning more about his new trade under WWE trainers in Florida.

But then there are few others like Farhan Faruqui.

A four-year veteran of the University of Guelph Gryphons wrestling team, where he competed in both freestyle and Greco-Roman wrestling, at 128 pounds, and later vied for a spot on the Canadian Olympic team in 2008, is now solidly into his next chosen profession. 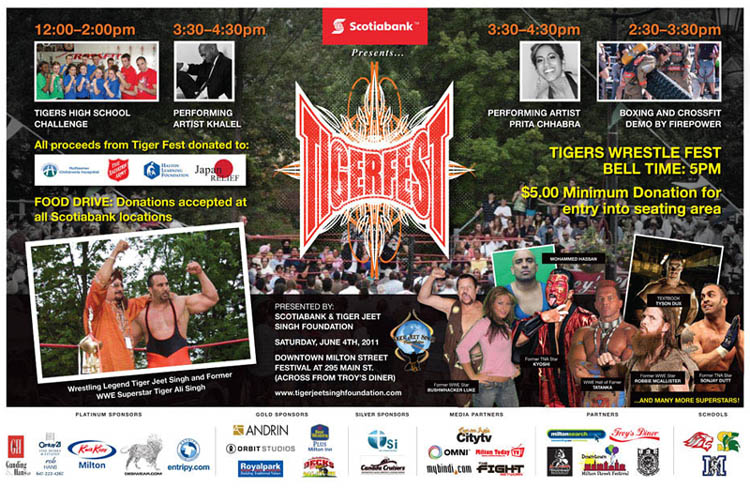 At age six, he’d been captivated by the athleticism and technical aspects of the WWF, led at the time by World champion Bret “Hitman” Hart. While he dreamed of being a wrestling star one day, he fell in love with the amateur side of the sport.

“I just loved the real combat,” he told SLAM! Wrestling from Florida, where he is one of 20 students who have paid for the opportunity to learn under the likes of Steve Keirn and Norman Smiley. Faruqui became “addicted” to the wrestling and the training. He loved the freestyle action especially, where the attacks to the legs were a challenge. The “sacrifices you make are worth it,” he said. “The training was paying off with the winning.”

At Guelph, the Toronto-born Faruqui competed under coach Doug Cox, a two-time Olympian who once beat Kurt Angle on the mat. A district champion in high school, Faruqui would finish fourth in the National Greco-Roman Championships in 2002, fifth in the CIS National Championships in 2004; he was also an Ontario University All-Star in 2004. After his eligibility was done, and his degree in Management Economics complete, he sought to further improve for the next three years, including competing on behalf of Pakistan (his mother’s home country; his father is from India) in 2007 at the Commonwealth championships in London, Ontario. Growing up, Faruqui spoke Urdu around the house, and also speaks Punjabi and Hindi, as well as English. 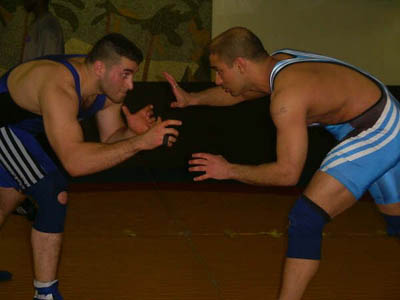 Faruqui, right, as an amateur.

His amateur career having petered out, Faruqui admits he was “lost” for a while. He managed fitness clubs, but still had a feeling that there was “something I started that I hadn’t finished.”

A friend pointed him to Squared Circle Training in Toronto to follow that buried dream of becoming a pro superstar.

Under head trainer Rob Fuego, Faruqui excelled, hitting the ring three or four times a week, coupled with similar daily training as he did before as an amateur.

“It was a lot more complicated than I expected,” Faruqui admitted. “It’s a true technical sport.”

Fuego, with his international experience, was an excellent teacher; however with his years as an amateur under his belt, Faruqui also knew how to be an excellent student.

“I was in the right hands with Rob Fuego,” he said. “I’m still learning from him today.”

Fuego (Rob Etchiverria) praised Faruqui’s passion. “I didn’t have to tell him what to do in the ring when he first started training, he knew how to be intense/animated whether he was in a match or just doing basic takedowns,” said Fuego. “I hear so many people come in to the gym and say, ‘I’ve been watching wrestling for years I know the moves,’ and of course they can’t even lock-up properly. Farhan came in with his mouth shut, eyes/ears wide open and picked everything up easily.”

Faruqui comes home on Saturday to compete at TigerFest in Milton, just a year after making his pro wrestling debut at the same charity-oriented show. The opponent — Tyson Dux — will be the same as well. 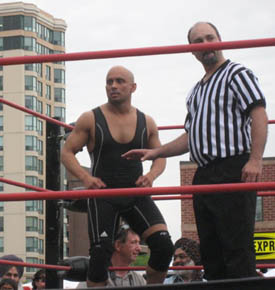 It was nerve-wracking to start off with 3,000 or so fans watching, he conceded. “One hundred percent I was nervous, but it was a good nervous.”

“He’s a shooter through and through,” said Tiger Ali Singh, one of the organizers of TigerFest along with his father, Tiger Jeet Singh, and Troy Newton. “He reminded me a bit of what Kurt Angle was like back in the day before he got jaded by the business and I mean that in the most positive way and Kurt will be the first person to agree in that if you don’t adapt, then this business will eat you right up. Farhan’s got the ‘Eye of the Tiger’ all the way. He’s young, hungry and never satisfied. I just love that about him and it’s the reason why we’ve invited him back. He was a real crowd favourite as well with his tremendous match last year with Tyson Dux.”

At only 5-foot-6 and 187 pounds, Faruqui knows he faces an uphill battle to get noticed. Quoting Rey Mysterio, he vows to prove that it is what is in his heart that matters.

“They can see the passion in my eyes,” he said, “and they can’t take that away from me.”

He’s in Florida for three months, learning the WWE style — “how WWE wants it” — and said that already he feels that he is in their “favourite category,” since he is regularly given tips and advice outside of the scheduled class time. The prize at the end is potentially a WWE developmental contract … and then?

Given how far he’s come in such a short time, it’s not out of the realm of possibility.