On the surface, it’s a tale of carnage and calamity. But at its core, it is a story about companionship. 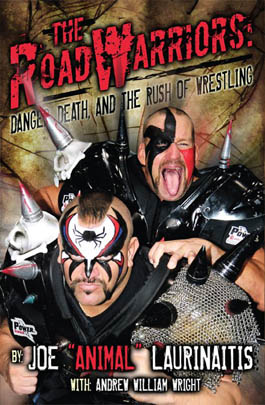 “You’ve got to understand, the relationship that Hawk and I had, we were just like brothers,” Joe Laurinaitis (better known as Road Warrior Animal) told SLAM! Wrestling from his home in Edina, Minnesota. His new memoir, The Road Warriors: Danger, Death, and the Rush of Wrestling delves deep into the bittersweet story of the Legion of Doom, the most dominating tag team in wrestling history.

“When Hawk passed away eight years ago, I knew that some day I would eventually write a book,” he said. “That had always been my plan. Ever since Mick Foley’s first book came out, most of the other wrestling books, with the exception of Bret Hart’s book, I thought were kind of garbage. They’ve been full of nothing but a lot of backstabbing and finger-pointing and everything else — and I didn’t want my book to be that way.”

It isn’t. Laurinaitis’ account of his professional wrestling career is simultaneously a celebration and an expose, written with humour, melancholy and plenty of respect for the greats of the industry.

The book opens with a refreshingly brief two-page chapter on his humble beginnings, born in Philadelphia, then later moving to Minnesota as a teenager. Laurinaitis writes: “I’m no dummy. There’s no question that everyone who picks up this book wants to jump right into the story of Animal and Hawk, and read the tales of the Road Warriors through the good, the bad, and the unbelievably ugly.”In the chapters that follow, Laurinaitis writes of breaking into the business along with Hawk, Rick Rude, and Barry Darsow (Demolition Smash, Krusher Kruschev). From Georgia Championship Wrestling under promoter Ole Anderson, to Portland with Don Owen, to Verne Gagne’s AWA, Laurinaitis credits several promoters for their influence and for allowing early success of the Road Warriors.

From chapter three onward, manager “Precious” Paul Ellering’s role is prominent in the Legion of Doom’s story, which includes capturing every major tag team title in pro wrestling. Laurinaitis writes: “Paul was more than a manager to us. He was the third Road Warrior.”

In the foreward of Laurinaitis’ book, Ellering writes: “In 1983, Animal, Hawk, and ‘Precious’ Paul had an appointment with destiny. Cable TV was spreading across the landscape of America. Macroeconomic realities became the catalyst for the change to come in wrestling. The Road Warriors were positioned to become a pop culture phenomenon.”

Blow-by-blow, detailed descriptions of some of the Road Warriors most memorable matches are laid out mid-book, as Laurinaitis takes readers behind the scenes of their infamous scaffold match at Starrcade ’86, along with the first War Games in ’87.

In these chapters, it is evident that Laurinaitis did extensive research, watching old matches in an effort to describe both in-ring and backstage happenings — before, during, and after the bouts. 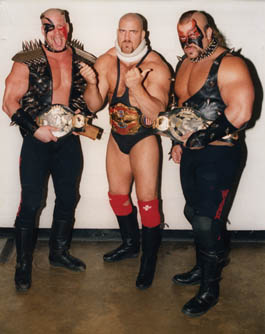 “Yeah, a wrestling fan made… a 50-DVD set of every match I did,” said Laurinaitis. “I don’t know how this guy got all these matches, but I have ’em now, and I watched many of them to remind me how they went down. Some of them, I find myself saying, ‘Did I really have that match?'”With an insider’s perspective, Laurinaitis shares memories of the Road Warriors’ feud with the Russians, while shedding light on his relationship with Nikita Koloff, whom he brought into the business. “Believe it or not, Hawk actually didn’t care much for Nikita at all, and the two never considered each other a real friend,” writes Laurinaitis. “There’s no question, Hawk and I were inseparable brothers as the Road Warriors, but Nikita and I had a special bond that took root back in my football days at Golden Valley Lutheran. Nikita took me under his wing back then, and I never forgot it.”

Just as captivating as their wars in the NWA with the Koloffs, the Horsemen, and the Midnight Express, are chapters chronicling their international tours of Japan, along with frequent trips the Road Warriors made through Canada. “For, like, five years, we’d go to Montreal for the summer,” said Laurinaitis. “It was so beautiful there, right by the river, and we always worked with the Rougeau boys. Rick Martel and Dino Bravo were running the company at the time, and it was always a great time there.

“I loved going to Toronto and staying at that Royal York Hotel with the Japanese steak house up top,” Laurinaitis added with a laugh. “We filmed that sitcom, Learning the Ropes, in Toronto when we were with the NWA, and we’d wrestle everywhere from Toronto to Winnipeg to Calgary. We were made mad hatters of the Calgary Stampede, and I’ve got this picture of me and Hawk, where they put these Stetson cowboy hats on us, if you can imagine, while we’re wearing the face paint. Man, Canada’s always been good to us, and of course a lot of great wrestlers came out of there.”

Sifting through old photographs, while watching video footage of the Road Warriors, was both a nostalgic and emotional experience for Laurinaitis. “It certainly took me back, as the hardest part of writing this book was revisiting, and talking about all the things I did with Hawk. 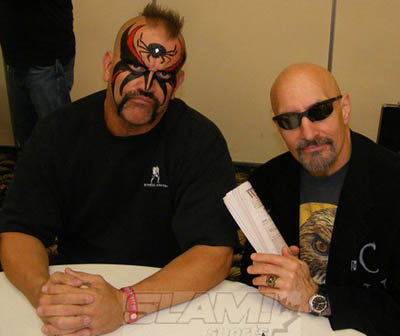 “Like I said, he was just like a brother — we fought, we argued, and I got on him, I tried to talk to him about things that were becoming an issue,” said Laurinaitis, of Hawk’s well-known drug problems. “But then when I thought things were out of control with him, there was nothing I could do to help him.”After a long pause, Laurinaitis continued, “And financially, it would hurt me. Hawk would get 60 or 90 days off, but then so would I, ’cause I was his tag team partner. Everything would be built up on TV, built up for months, with hundreds of thousands of dollars in advertising being spent to promote a tag team match — then Hawk would get suspended.”

Laurinaitis in later chapters, describes the emotional toll of witnessing Hawk’s escalating substance abuse issues. One of the saddest stories Laurinaitis tells involves watching his partner Hawk wrestle at SummerSlam ’92, clearly inebriated. “It was miraculous he could even walk,” wrote Laurinaitis.

Also written about from a personal perspective are the tragic deaths of peers like Rick Rude, Curt Hennig, Owen Hart, and Davey Boy Smith. “I didn’t want to dwell on all the guys passing away, but it’s a part of life, and it was a part of our life,” he said. “The worst part about it, for me, was that most of those guys were my friends who came up in the business the same time that I did.”

Laurinaitis credits co-writer Andrew William Wright for encouraging him to finally sit down and create his memoirs. “My writer Andrew, who I had done appearances for in the past, was buggin’ me for two years, saying, ‘Hey Joe, you gotta do a book, and I’ll write it for you!'” recalled Laurinaitis. “And I’d say, ‘Ah, I don’t know,’ ’cause it was his first time writing a book too. But eventually I took a chance on him and said, ‘Alright Andrew, but if you screw this up, bro, I’ll be flying into Jersey….’ We ended up spending hundreds of hours with me going over stories, and him jogging my memory. Endless conversations we had, and finally when we put it to paper, I was really happy and proud of the way the book came out.”

Fans will indeed eat up all the personal insights, told in meticulous detail, from backstage drama to behind-the-scenes negotiations from Jim Crockett Promotions to the WWF. In the chapter Face to Face with Vince & Dropping the Belts, Laurinaitis writes of their first meeting with Vince McMahon: “As we walked up to the front door, I noticed Vince’s clothes — he looked like he popped right out of an L.L. Bean catalogue. Not only was he wearing penny loafers and khakis, but he actually had a sweater tied around his neck like he was in a Doublemint chewing gum commercial or something.”Anyway, he took us on a quick tour of the house, which was a very traditional colonial type. There was a classic moment when he took us into the main sitting room where the fireplace was. Here was this grand stone fireplace and then right above the mantle was a large, hokey painting of Vince himself, in a green suit.”

Laurinaitis says such amusing, behind-closed-doors tales provide snippets of the wrestling world that fans can’t find elsewhere. “Our first meeting with Vince, that’s the kind of thing I figure most fans don’t get to read about, so I thought it would be nice to give readers a little taste of what it was like to be in his house, and what it looks like inside — because with Vince, there’s this mystique about him.”

Such revealing peaks behind the curtain, mixed with heartfelt tales of friendship and struggle between two of the most influential wrestlers in history, make The Road Warriors: Danger, Death, and the Rush of Wrestling one of the most entertaining and engaging wrestling memoirs ever written. Whereas many wrestling memoirs are pulp cash-grabs full of spite and gossip, this one delivers real insight and emotion.

Like the Legion of Doom themselves, this definitive wrestling biography should stand the test of time. As Laurinaitis writes in the final chapter: “I’m convinced that if Hawk and I were just now breaking into the business as the Road Warriors today, our results would be exactly the same as they already are. We would become the greatest tag team in professional wrestling history.”